The anonymous whistleblower at the center of the House’s impeachment inquiry against President Donald Trump is allegedly soliciting illicit donations through a GoFundMe account, according to a complaint filed with the Intelligence Community Inspector General (ICIG).

The complaint claims that the whistleblower, who reportedly works at the Central Intelligence Agency (CIA), violated federal law by collecting over a quarter of a million dollars from largely anonymous sources. Fox News first reported on the complaint, which was filed last week.

Federal law prevents government employees from soliciting donations “given because of the employee’s official position” or donations from “prohibited sources,” meaning individuals who may have been substantially affected by the employee’s performance or agency. The complaint argues that the GoFundMe donations were clearly made due to the whistleblower’s “status, authority or duties,” and that the 6,000 donors couldn’t possibly have been screened to make sure they aren’t prohibited sources.

The GoFundMe notably states “A U.S. intelligence officer… needs your help,” citing the cost of lawyers for the anonymous whistleblower, according to the complaint. 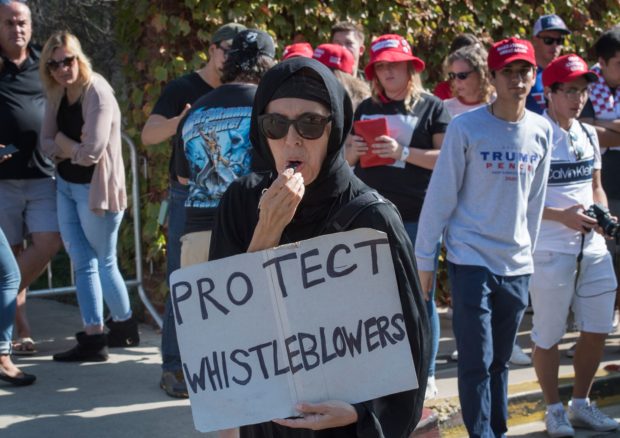 A Muslim woman holds a ‘Protect Whistleblowers” sign as she walks past supporters of President Trump during a protest outside a book promotion by Donald Trump Jnr, at the UCLA campus in Westwood, California on November 10, 2019. (Photo by Mark RALSTON / AFP) (Photo by MARK RALSTON/AFP via Getty Images)

Tully Rinckey PLLC, the law firm representing the individual behind the new complaint, says this is a “whistleblower-on-whistleblower” situation. The individual reportedly has a top security clearance and has served in the government.

“I have not seen anything on this scale,” Anthony Gallo, the managing partner of Tully Rinckey PLLC, told Fox News about the whistleblower’s GoFundMe. “It’s not about politics for my client — it’s whistleblower-on-whistleblower, and [my client’s] only interest is to see the government ethics rules are being complied with government-wide.”

“[M]y client believes … that the federal employee you are protecting and their attorneys apparently have strategically weaponized their alleged whistleblowing activities into a very lucrative money-making enterprise,” Gallo wrote in the complaint letter to ICIG Michael Atkinson.

The complaint could raise new concerns about the whistleblower’s credibility as the House moves toward open hearings in its impeachment inquiry against the president. House Intelligence Chairman Adam Schiff declined Republican requests to interview the whistleblower this week, alleging that hearing from him or her would be redundant. The whistleblower was reportedly in contact with Schiff’s office before he or she filed his official complaint against Trump over his July 25 phone call with Ukraine. (RELATED: Trump Accuses Adam Schiff Of Doctoring Impeachment Transcripts)