Browning’s Cynergy line of boxlock over-under shotguns was announced in 2004, and initial thoughts were that the functional design was excellent but the styling, particularly the buttstock, might put off some customers. Far from it, in the years since its introduction the Cynergy has found a premier place among the company’s scattergun lines.

The design by Joseph Rousseau and Dwight Potter was granted a patent that they, both Browning employees, transferred to the company. What sets this shotgun apart from all others is its unique “MonoLock Hinge.” The barrels pivot or hinge deep into the low-profile action. They slide on two mating semi-circular cuts, one in the receiver and the other on the sides of the monobloc. The barrels are of monobloc construction, whereby the tubes are soldered into matching holes in the monobloc that carries the locking curves, extractors, etc. According to Browning, the system carries “300 percent more surface to pivot on than traditional trunnion-style hinges.”

When an over-under shotgun is fired, the barrels want to rotate upward, but, with this style of locking, the impact is taken up over a very wide area, providing extremely long life to the Cynergy action. The lock-up of the barrels is by a U-shaped locking device that mates with two opposing cutouts in the monobloc about half way up the bottom barrel’s chamber. This style of locking is used by many high-grade Italian- and British-made guns.

The Cynergy Wicked Wing is manufactured by Miroku in Japan, a firm that has shared in the construction of a number of Browning’s shotguns since 1965. Although the Cynergy is made to chamber a number of different gauges, all Wicked Wing models fire 12-ga. shells, and our test sample had 28″ barrels. Of note is Browning’s excellent “Reverse Striker” mechanical trigger. We have always preferred mechanical triggers on hunting guns, because if there’s a misfire with the first shot, the second barrel will still fire. There are no hammers and firing pins but rather a spring-loaded integral striker as in a bolt-action rifle. Because of this arrangement, the lock time is claimed by Browning to be a swift 1.8 milliseconds from trigger pull to primer strike. The average of 10 pulls measured with a Lyman Digital Trigger Pull Gauge was 4 lbs., 10 ozs., for the bottom barrel and 5 lbs. for the top—very acceptable pull weights for a production shotgun.

As seems to be a common trend in ensuring durability, all exterior metal surfaces of the Cynergy Wicked Wing are completely clad in Cerakote—in this case a Burnt Bronze color—and the synthetic stock and fore-end are dipped in a camouflage pattern. In the case of our test gun, the design was Mossy Oak’s Shadow Grass Blades; however, Browning also offers the Cynergy in Mossy Oak Bottomland and Realtree Max-5, if you wish to match the gun to your wardrobe.

Recoil is greatly attenuated by Browning’s Inflex Technology recoil pad that offers what it calls “long-travel recoil reduction.” Shooting a box of Remington’s new Peters’ Premier Blue 1¼-oz. steel duck loads, we found that recoil was not unpleasant at the patterning board and over the chronograph, and even less noticeable in the field. The gun comes with a 1/4″ spacer to lengthen the stock that matches the curve of the Inflex pad, which is heavily curved to reduce felt recoil. Three additional pads are available for aftermarket purchase that provide 1/2″ length-of-pull adjustments. The pads are coated with Parylene that provides a slick surface when mounting, although we found them to be just a bit tacky, which isn’t a bad thing in that, once mounted, the gun stays put. 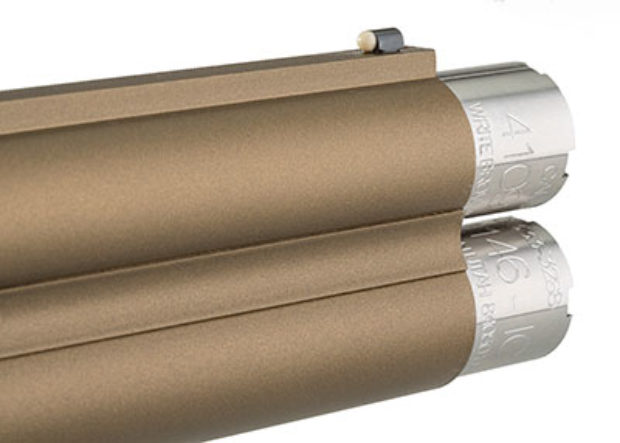 The barrels and 3½” chambers are chrome-plated, making this shotgun rather impervious to bad weather. Included are three choke tubes marked IC, M and F. They are cleverly engraved similar to the bands used by the U.S. Fish and Wildlife Service and other similar agencies to track waterfowl. The choke tubes measure 3¼” long, and provide a long and smooth transition from the Cynergy’s cylinder bore to the choke constriction. Measured with our digital bore micrometer, the cylinder bore of both barrels was a consistent 0.7335″—on the wide side—as more open bores perform best when shooting large shot. Measured against the cylinder bore, the tube constrictions were found to be: improved cylinder, 0.0065″; modified, 0.016″; and full, 0.315″. The improved cylinder and modified tubes were on the more open side of the standard 0.010″ and 0.020″ constrictions, but certainly within reasonable limits.

The top rib measures 1/4″, and is topped with an ivory Bradley-style front bead. The side ribs are ventilated for faster cooling and weight reduction. The Wicked Wing models are available in 26″-, 28″- and 30″-barrel lengths. 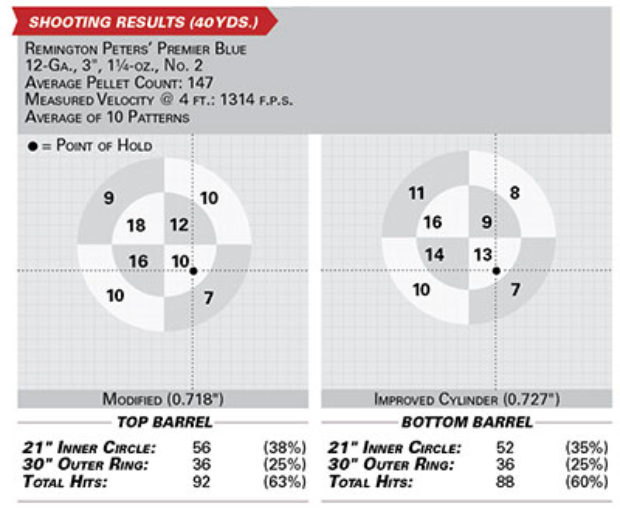 We initially shot the Cynergy Wicked Wing at the 16-yd. fitting plate and found that it centered its patterns 4″ high and 5″ to the left. Correcting for this, we then shot 10 patterning targets per barrel at 40 yds., with the improved cylinder choke in the bottom barrel and the modified one in the top. Both barrels shot percentages very close to each other, with the former at 60 percent and the latter at 63 percent. We counted the pellets in two Peters’ Premier Blue No. 2 steel shells, and the average came to 147 pellets.

Handling wise, with the synthetic stock the balance point is 7″ in front of the trigger. Most over-unders run around 4½”, so this gun felt quite barrel-heavy. In some ways this might be an advantage because, with the main mass of the gun in the forward hand, the tendency to slow the swing is reduced. Given the choice, we prefer muzzle-heavy far more than butt-heavy shotguns that make one feel as if he’s handling a fly rod. The higher placement of the patterns allows the shooter to always keep the birds above the barrels, providing an excellent sight picture. All in all, given the Browning Cynergy Wicked Wing’s excellent engineering, durable exterior finish and overall design, it’s a fine shotgun for the waterfowler.