Best known for its hunting and clay target guns, Italy’s Fabbrica Bresciana Armi, S.p.A, or FABARM, has branched out into a new arena with its pump-action, 12-ga. STF/12, which has been adopted by a few foreign military and police agencies. At least for now, components of the modular design—including short barrels regulated by the NFA and folding buttstocks prohibited from importation—are not available in the United States. It comes in a single barrel length, 18″, and with a fixed buttstock, although in your choice of black or flat dark earth.

The beefy receiver is of 7075 aluminum, and its lines are reminiscent of the Browning BAR, with the back of the receiver proper accepting a receiver extension that allows the buttstock to be quickly swapped out via a vertical dovetail at its rear. Measuring 2″ wide, 2 ¾” tall, 8 ¼” at its top and 7 3⁄8” at its bottom, the receiver, obviously, is longer at its top.

The STF/12’s steel dual action bars are machined as one piece with the bolt carrier. The steel bolt locks into a recess in the barrel extension when pushed up by the bolt carrier’s lug, which also has a tensioning spring at its front. Interestingly, there is a lug at 12 o’clock on the barrel extension’s rear that mates with a recess cut into the receiver’s interior. This makes barrel positioning—especially when swapping tubes—consistent and easy. A single hook extractor is on the bolt face’s right, while ejection is via a spring-loaded plunger on the left rear wall of the barrel extension.

A floating accessory rail is mounted atop the gun and is fixed to the heat shield at the front with a rotary dovetail. At the rear, loosening a thumbscrew and flipping it over allows for the rail’s removal.

Unlocking the action is via a stamped steel release on the front face of the oversize, polymer trigger guard. The trigger group assembly is secured within the receiver by two captive pins that pass from left to right. There is also an Allen-head locking screw on the receiver’s right—this is a belt-and-suspenders gun. A crossbolt safety behind the trigger is engaged by pressing the round button with a red annular indicator from left to right. Depressing the triangular button on the right disengages the trigger-blocking safety. 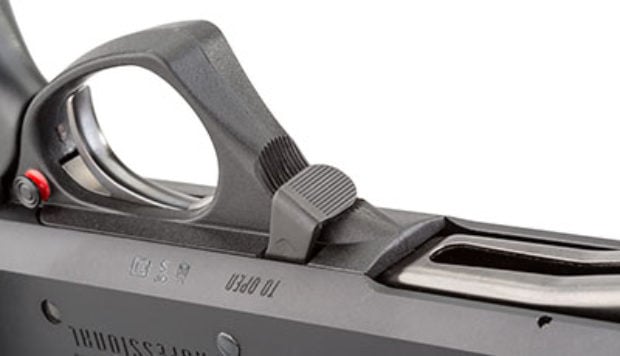 The action release is at the trigger guard’s front.
–

Fixed to the barrel with four Torx screws is the 9 1⁄8“-long sheet steel heat shield. It extends from 3 to 9 o’clock, and has three slanted cooling slots at the front and five at the rear on each side. It also serves as the front retaining point for the 15 3/4” top rail, which floats above the receiver and heat shield, and has Picatinny rail slots along its length. At the front, there is a rotary dovetail, while at the rear there is a thumbscrew that locks it in place. Loosening the captive, knurled thumb nut then flipping it 180 degrees allows the whole rail assembly to be rotated 90 degrees and lifted off the STF/12. Sights include a protected red fiber-optic front held to the rail by a thumbscrew on the left and a fully adjustable LPA aperture rear flanked by dual green fiber-optic pipes. As if that is not an enough, with the rail removed, its rear base, fixed to the receiver’s top, is an aperture framed with two white dots, while the front base has a fixed post with a single white dot. 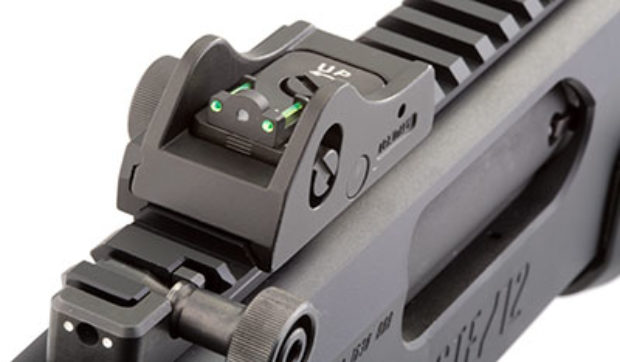 If you add an optic, the STF/12 gives you three sighting options; it comes with a fully adjustable LPA rear aperture, and there’s another aperture incorporated into the mount.
–

Chambered for 2 3/4″ or 3″ shells, the STF/12’s 18″ nickel-chrome-moly steel barrel is deep-drilled—rather than hammer-forged—and its bore is chrome-lined. The latter measures 0.724″, slightly tighter than improved cylinder but not by much. The shotgun comes with a toothed “breacher” compensator/choke tube that threads into the muzzle like a conventional tube, but its base is designed to overlap the barrel by 1/8″, settling around the barrel’s external diameter. There are three rows of five slots, with the two rearmost angled slightly to the rear. The tube is marked “INNER HP ACCURACY,” and it measured 0.701″ in constriction. It is optimized for slug and buckshot use, as is reflected in the patterning table.

The fixed, skeletonized buttstock is topped by a 3/4″ recoil pad, and the aluminum block at its front is vertically dovetailed into the receiver extension. Length of pull is a short 12½” in a nod to its law enforcement origins. The polymer pistol grip is narrow at its top and full at its bottom, somewhat reminiscent of that of the FAL. It is fixed to a lug on the receiver extension via a beefy screw. All polymer components have a soft-touch finish. Our sample arrived with a hand stop and Picatinny rail accessory affixed to the front of the fore-end, which comes at additional cost. Accessories can also be mounted at the 3-, 6- and 9-o’clock positions. Two fixed 1″ steel sling swivels are provided. One is at the back of the receiver between its end and the extension, while the other is between the magazine cap and magazine tube’s front retainer. Both are reversible. 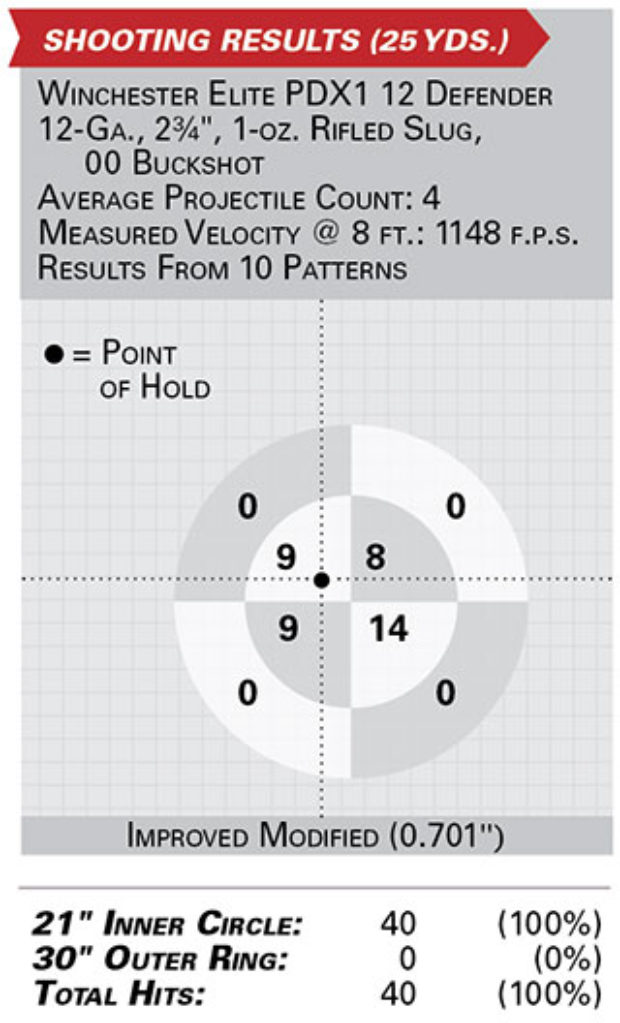 The FABARM Professional STF/12 chewed through and spat out a mix of more than 250 2 3/4″ and 3″ shells, both buckshot and slug loads, flawlessly. An informal test using Hornady’s American Whitetail rifled slug load and the factory iron sights produced a 4½” five-shot group at 50 yds., which is telling of the smoothbore’s capability. Pattern testing was at 25 yds. with Winchester Ammunition’s PDX1 12 Defender—containing a 1-oz. Foster-style rifled slug behind three, copper-plated 00 pellets—with the results tabulated above. The muzzle brake’s design was effective at recoil mitigation, and the gun’s 8-lb., 7-oz., heft balanced well between the hands. Throughout our range sessions, the action was smooth and tight, and the beveled surface on the underside of the loading port was appreciated. Some of our shooters found the comb height perfect for the iron sights but had to break cheek weld when a high optic was mounted on the top rail.

Home defenders, competitors, security personnel and law enforcement officers ought to consider this husky gun as a serious, if spendy, contender in the pump-action-shotgun world. We hope we see more configurations and accessories in the future to fully realize the platform’s potential.