Far from the Red Ryder BB gun that many folks might have in mind when they think of airguns, SIG Sauer’s ASP20 Break Barrel Air Rifle is among the most advanced break-barrel air rifle systems designed. Built at SIG’s facility in New Hampshire, the ASP20 (Advanced Sporting Pellet) is a suppressed, gas-piston-powered airgun available in either .177 or .22 caliber, and with either a wood or synthetic stock. Our test sample for this evaluation was the wood-stocked .22-cal. model.

For those more accustomed to semi-automatic or bolt-action air rifles, break-barrel designs are breechloading, single-shot affairs with a hinge in the action that allows access to the chamber. Upon firing the gun, breaking the action open in this way not only allows a fresh projectile to be loaded into the rifle, it also cocks the gas piston for the subsequent shot. 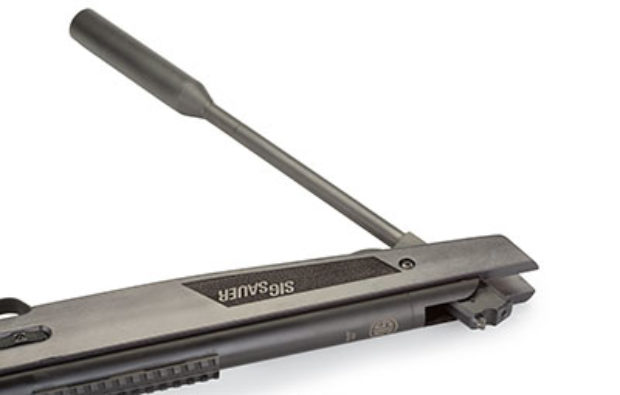 The SIG Sauer ASP20’s Glidelite cocking mechanism requires only 33 lbs. of force to cock, significantly less than the 48 to 52 lbs. of force required to break the actions of most other break-barrel designs.
–

Individuals lacking upper body strength may struggle to cock break-barrel air rifles, which is why SIG developed the ASP20’s Glidelite cocking mechanism. A pivot point closer to the shooter’s body, which provides more leverage, and reduced friction in the joint, mean that the ASP20 requires only 33 lbs. of force to cock—a significant improvement relative to the 48 to 52 lbs. of force required to break the actions of most other break-barrel designs.

Barrel droop is a frequent issue in break-barrel airguns, and SIG has addressed the problem with its proprietary Breech Wedge Lock system, which ensures that the barrel and action lock up together in exactly the same spot, shot after shot, contributing to more consistent accuracy. The Nitron-coated steel barrel measures 14″, and with a 5.5″ suppressor then welded onto the muzzle, has an overall length of 19.5″.

Simple in appearance with a straight blade, SIG’s patented MatchLite trigger is a two-stage match-grade unit that can be adjusted by the user for both its pull weight and for where in its arc the second stage is encountered. The company advertises a pull-weight range between 2 lbs., 8 ozs., and 4 lbs., but our test sample broke consistently a bit lighter than that—at 2 lbs., 4 ozs. A 13-slot section of Picatinny rail is welded to the top of the receiver for the installation of an optic, and bilateral two-position safeties—with rearward being safe and forward being fire—are positioned above the trigger.

A 13-slot section of Picatinny rail is welded to the top of the ASP20’s receiver for the installation of an optic (l.), and the air rifle’s MatchLite trigger (ctr.) is adjustable both for pull weight and for where in its arc the second stage is encountered. A 5.5″ suppressor is permanently affixed to the SIG’s 14″ barrel (r.), giving it a total length of 19.5″.
–

Made of beech, the ASP20’s stock (patterned loosely after the SSG 3000) is shaped with a groove cut into its bottom, perfect for use with a pinch bag. Stippling on both the palmswell and fore-end provides texturing that is a bit aggressive but not abrasive. Overall, we found the aesthetics of the rifle to be pleasing to the eye, however, the wood on our sample was stained such a dark color that it could have been mistaken for SIG’s black synthetic model.

Accuracy-wise, the gun fared quite well, no doubt in part due to the light and crisp trigger. Using American Rifleman’s five-shot, five-group protocol at 33 ft., SIG’s own 21.14-gr. Wraith Pb pellets yielded both the best single group (0.46″) and the best five-group average (0.49″). Our test rifle did not care for Gamo’s copper 9.8-gr. Luxor Cu pellets, the five groups averaging 1.01″ in diameter—only one of which was smaller than either of the other two loads’ largest group.

The ASP20 proved to be a reliable airgun, but our testers discovered that care must be taken to ensure that the pellet is fully seated within the chamber. With an unscoped weight of 8 lbs., 4 ozs., recoil is virtually nonexistent, and report is minimal due to the attached suppressor. Marketed for the hunting of small game, the SIG would also excel at competition use or just casual plinking in the backyard. However, as the round count increased during extended range sessions—even with the Glidelite system—cocking the ASP20 after each shot becomes increasingly tiring. When our testers’ arms began to feel fatigued, we found that using a table or the upper thigh for added leverage while cocking the action was very helpful. 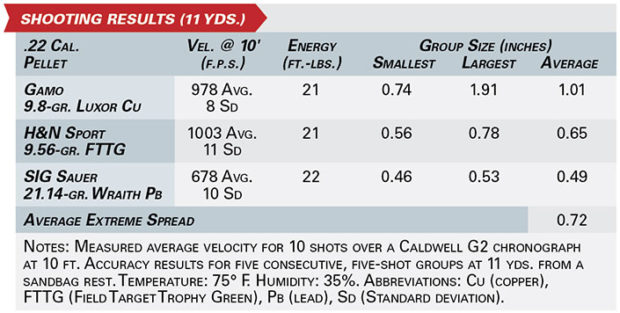 The result of the first collaborative effort between the company’s firearm and airgun divisions, SIG’s ASP20 takes its airgun line in a new direction. Not only is it the first break-barrel model in the series and the first design to be built in the United States, it is also the first SIG air rifle that doesn’t outwardly mimic one of the firm’s semi-automatic center-fire carbines. Despite deviating from the norm, we found the ASP20 to be well-made and suitable for a broad spectrum of airgun applications.