Military Matters Foundation founders JoAnne Mantz and Janna Driver provided the Daily Caller News Foundation with exclusive polling and photographs and said that military families are subjected to mold-ridden homes that seriously impact the health of both their families and their husbands who serve in the Armed Forces. Mantz’s husband retired from the U.S. Navy Sunday, while Driver’s husband retired from the U.S. Air Force in March.

Mantz and Driver told the DCNF that housing companies say they are not aware of the serious issues with military homes but paper over mold and subject families to extraneous charges instead of remedying the problems.

Both Mantz and Driver lived on military bases with their families, with Mantz in Newport, Rhode Island, from 2015 to 2018 and Driver in Oklahoma from 2017 until 2018. Both women said doctors confirmed to them that they and their families suffered from illness brought on by the conditions of their former military homes.

“The conception in the public is that you live for free,” Mantz said, referring to military families on base. “No, they don’t live for free. They’re paying to be in these houses. Their landlord is their boss. They cannot get out of the leases. Their pay for these housing goes directly to the housing company so they can’t even stop the payments to the houses. I mean they’re young and you’re just stuck in the middle and sick.”

Driver and Mantz worked with Hayward Score, a group devoted to helping resolve unsanitary conditions in military housing, to publish a housing survey in November. The survey, conducted in 2018 and 2019, focused on the home and medical issues of families living in military housing.

“The data compiled from thousands of families regarding their situation and health effects is telling,” Mantz wrote in an email to the DCNF. “One thing we can say is a constant, thousands of families are suffering health-wise, with many of the same symptoms, that go away when they leave the home. That speaks volumes.”

The poll also found that visits to specialist doctors are high among military families and military insurance spending is high. The poll has a margin of plus or minus 3% on military data and plus or minus 4% on medical related data.

Another intake survey, that the Military Matters Foundation (MMF) has families take who wish for help from the organization, shows the age groups of people affected health-wise by their military home. Respondents were mostly members of Navy, Air Force or Army families, and the survey found that children aged 1 to 5 were most strongly impacted health-wise by the conditions in the homes.

Every two to three years, military families experience a permanent change of station (PCS) and a new family will move into the home, Mantz and Driver said. By the time the new family moves in, the housing companies have covered up walls with a fresh coat of paint — despite “mold or things growing through walls,” Driver said.

“The next family doesn’t know that there is mold coming through the walls and then everybody gets sick,” Mantz said. “Then they all get sick and they don’t realize the symptoms are from the house making them sick.”

The MMF founders provided the DCNF with photographs showing large amounts of black mold seeping through walls and covering floors in homes on Tinker Air Force Base in Oklahoma. Driver said that one photo, showing a decrepit bathtub, is from Robins Air Force Base in Georgia.

Mold has been linked to the development of asthma in some children, as well as upper respiratory tract symptoms, nasal stuffiness, throat irritation, coughing or wheezing, eye irritation, and in some cases, skin irritation, according to the Centers for Disease Control and Prevention (CDC). The CDC warns that mold must be removed as soon as possible from homes as it may cause health risks. Patients who have suffered from exposure to mold have said they suffer from anxiety, depression and confusion.

The Driver And Mantz Families Suffer From Their Military Homes

Both women also said they suffered from serious health issues stemming from the conditions in their former homes. Mantz suffered from liver issues and Farmer’s Lung, and Driver said her family of seven children suffered from continuous viruses the entire time they lived in their military home.

Driver’s family moved into their Oklahoma military home in June 2017. In August 2018, they moved for a month to a Tinker Air Face Base “Patriot home” — a vacant home on base that the military uses to house families while their home is being remediated, according to Driver.

But Driver said this home was also full of mold, and her family became even sicker. From here, the Driver family moved to a hotel for two months where the military paid for their rooms one night at a time.

“So each morning it was a battle with them and we never knew where we were going to be the next night until they finally paid for weeks at a time while they remediate,” Driver said. “We caught them doing multiple air tests but we were finally given a clearance test where Stachybotrys was found in a bedroom.”

One night while the family was living in the hotel in November 2018, Driver drove behind a military maintenance building and found her family’s belongings stuffed in a garbage bin, she said. 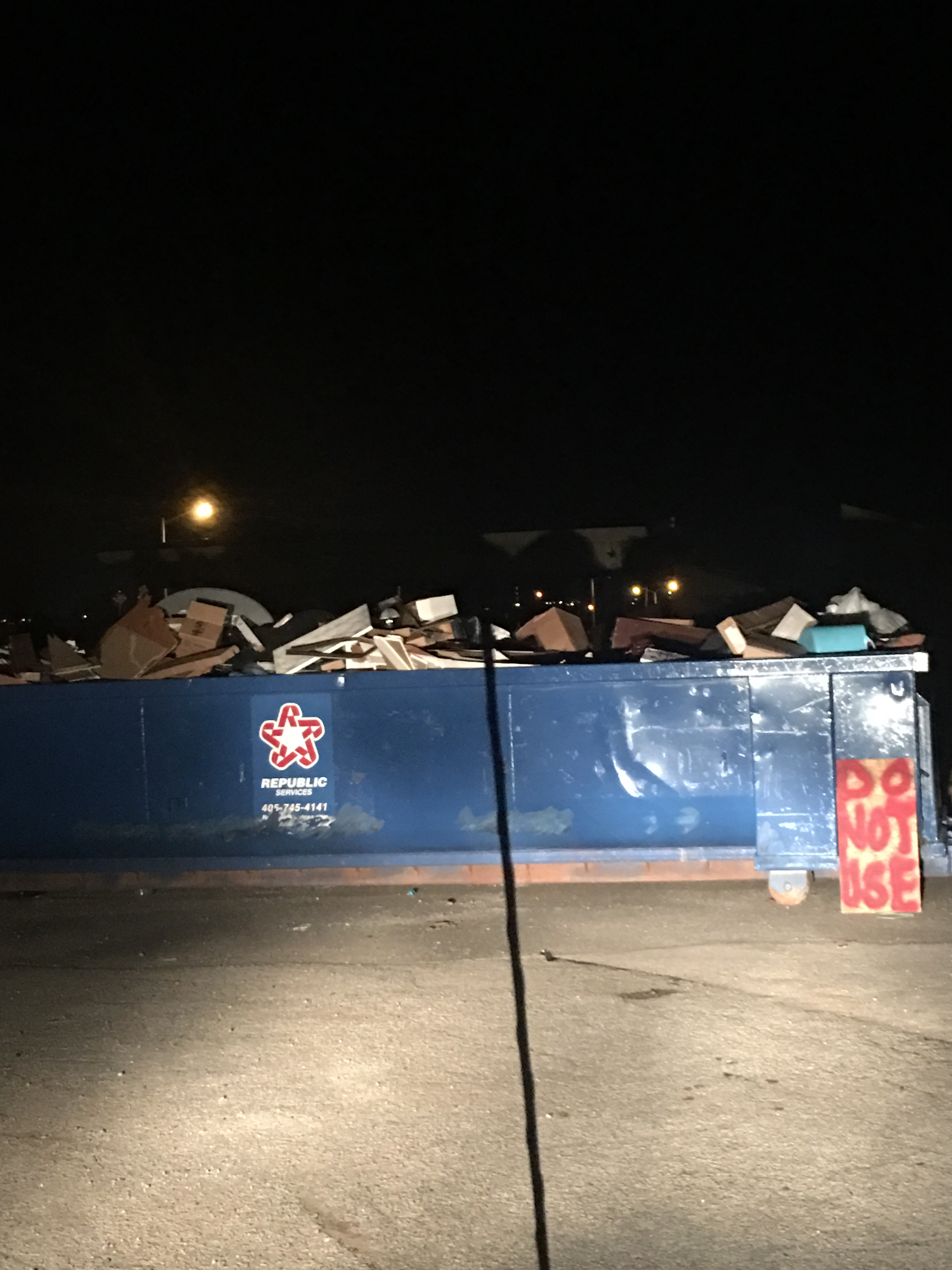 This photo is of the Driver family’s belongings. (Courtesy of Janna Driver)

Driver said the housing company Balfour Beatty put out the painted sign in the photo that says “do not use.” She does not know whether Balfour Beatty intended to throw out their belongings or stow them.

“It was heartbreaking to look in it and see the tooth fairy pillows my late grandmother had made for my kids and their little shoes and everything we had accumulated over our lifetime,” she said. “It was so sad.”

The family declined to take their military base home back in November 2018.

In regular housing situations, families can reach out to their landlords to remove mold or fix housing issues. But military families often cannot do this because their landlord is often their husband’s boss, Mantz said. Their boss may not have the tools to help them or get irritated and will not wish to be involved. Some bosses tell their husbands that wives need to take posts off Facebook about their houses.

“It is also a federal land issue,” Mantz added. “So in most cases state and local laws don’t apply. You can’t call the health department to come in — they won’t even touch it because we’re on federal land.”

“Our air conditioner went out in June and they came out looked at it, closed the work order, but didn’t fix it. We went without air conditioning for about two weeks in July in Oklahoma in 110-degree weather with little bitty kids,” Driver said. “And this happens all over.”

On one occasion, a maintenance worker came to Driver’s Oklahoma military base home in 2018 to fix a leak in their home. Driver said she had already noticed dark spots on the walls coming through their maintenance closet, which the family could not access, and the wall of this closet adjoined the room in which their 4-year-old twins played all day.

Driver said her twins had been complaining of having horrible headaches and being dizzy.

“I was terrified that they had a brain tumor,” she said. “I mean, I couldn’t imagine what was wrong with them.”

Driver’s husband followed the maintenance worker to look into the maintenance closet and overheard the worker “freaking out” on the phone with the housing office, saying that the closets should have been redone months ago.

When her husband attempted to look into the closet, the worker reportedly told him, “Oh, I can’t let you come in here. You’re not allowed to see in this room.” But Driver said her husband pushed through and saw that the maintenance closet was covered, floor to ceiling, in black mold.

“You could see where they had been spraying it with bleach and scrubbing it,” Driver said. “And they admitted that they’d been doing that for six months.”

Driver said their family moved out immediately and sought a doctor that treats mold toxicity in Oklahoma.

Lack Of Help From Federal Entities

The Military Matters Foundation founders were frustrated that their efforts to draw attention to the conditions of military homes have been met with little attention by those in government positions.

“We still have seen no major improvements, no thorough assessments of the homes and the [Public Private Venture] PPV landlords are, for the most part, still not being held accountable for negligent building maintenance resulting in debilitating symptoms,” Mantz said. A private partner who manages the day-to-day owns PPV housing under an agreement with the Department of Defense, which has limited rights and responsibilities.

Both Driver and Mantz said that whistleblowers are coming forward with evidence showing that families will file complaints with the Office of the Inspector General (IG) for an investigation.

“We have people that work at the IG offices at local bases that have said the Pentagon sent them directives saying close out all of these investigations ASAP,” Mantz said.

“We’ve come to learn that it is a problem nationwide,” he said and promised to take action against such conditions. “It’s a national crisis of proportions we have not seen since the scandal at Walter Reed a decade ago.”

Corvias and Rising View did not respond to the DCNF’s requests for comment.

“These companies are so fraudulent and so out of control,” Mantz said. “There’s no accountability. And we’ve seen a lot of what the DOD is doing is absolutely protecting them. Really.”

“It’s just such an embarrassment how no one is coming forward to really be a hero and help these families, for military families,” she added.

Lend Lease told the DCNF that it responds to resident concerns over the “healthiness of their homes immediately” and that it is implementing a range of “preventative solutions” that include “the application of new mold-inhibiting paint and primer during the change of occupancy period, installing enhanced [heating, ventilation and air conditioning] HVAC filters, and replacing ventilation systems as needed.”

“Over the past year, we have made substantial investments in staffing and technology improvements to implement repairs at an even faster pace,” the company told the DCNF. “We have also created an enhanced customer service training curriculum to deliver the best possible resident experience to families living on-base.”

A spokeswoman for Balfour Beatty told the DCNF in a statement that “the health and safety of residents is always our top priority.”

“We take prompt action to investigate complaints about mold,” the spokeswoman added. “Mold is an issue for many people living in areas that experience high temperatures and humidity or rainfall. It is not unique to military housing. We are, however, working diligently to prevent and detect mold. We have added regional environmental specialists, retained licensed environmental consultants, enhanced environmental training for our employees, improved quality assurance, added quality control specialists, and increased the regular inspection of homes for mold and moisture issues.”

The spokeswoman added that Balfour Beatty follows “all applicable [Environmental Protection Agency] EPA guidelines and regulatory standards in the remediation of mold.”

Balfour Beatty has denied similar allegations in the past. The company told CBS News in a June statement that it “has not and does not condone the falsification of records in any way” after allegations surfaced that service members lived in dangerous, “slum-like” conditions at military bases around the country and that Balfour Beatty allegedly falsifying data in order to get millions in bonuses.

Balfour Beatty also said in June that “one employee was found to have acted improperly” after an Air Force investigation.

Neither the Department of Justice nor the DOD responded to the DCNF’s requests for comment.