The Importance Of Institutions
NRA American Rifleman Contributor
January 20, 2020 10:17 AM ET
Font Size:
Ruger jump-started the post-World War II single-action revolver market with the introduction of its .22-cal. Single-Six in 1953, a scaled model of Colt’s legendary Peacemaker. It combined traditional external form with modern internal mechanics, based on the input of handgun experts—such as six-gun guru Elmer Keith. It would introduce a new generation of Americans to the reliability and ease of use of the single-action revolver. The Single-Six also pioneered Ruger’s use of precision investment casting, a process that would allow the company to make high-quality, yet affordable, firearms. 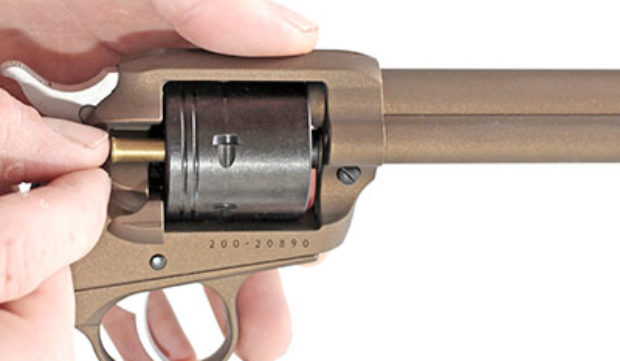 The Wrangler uses Ruger’s loading gate interlock system. With the hammer down, the loading gate is opened to let the cylinder spin freely for loading or unloading.

The Single-Six was so popular that in 1955 Ruger brought out its Blackhawk line of center-fire single-actions, helping to nudge Colt into re-introducing the iconic Model P—which had been discontinued since World War II—the following year. Sixty-six years later, Ruger continues to innovate in the single-action-revolver market with the introduction of the Wrangler, a revolver that promises to keep the single-action affordable and relevant to a future generation of shooters. 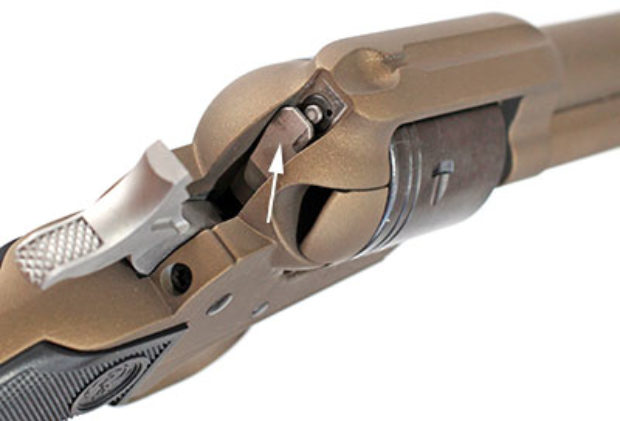 The Ruger Wrangler uses a transfer bar safety system (arrow), allowing the revolver to be carried safely with all chambers loaded.
–

Though it cost only $57.70 when introduced, the MSRP of Ruger’s Single-Six line has crept up to more than $600 today. The company saw the need for a new single-action chambered for .22 Long Rifle that would sell at an affordable price point, yet still provide all the safety and quality features for which Ruger is known. Enter the Wrangler. With a suggested retail price of $249, it will likely be found at the local gun shop for around $200.

How does Ruger do it? First, and most visually obvious, is the Wrangler’s finish. The cylinder frame, grip frame and barrel are Cerakoted, a rugged ceramic finish that does away with the polishing needed on Ruger’s blued and stainless steel revolvers. Three finish options are available—Black, Silver and Burnt Bronze. All three colors come with a black-oxide-treated cylinder.

The Wrangler uses aluminum alloy for its cylinder frame, unlike the steel alloy used on the Single-Six. Critical components, such as the trigger and hammer, are metal-injection-molded (MIM) out of stainless steel. Stock panels are checkered synthetic, though the Wrangler shares the XR-3 grip frame size with the Single-Six, meaning there is a variety of aftermarket stocks available. The overall dimensions of the Wrangler also match the Single-Six for holster compatibility. The Wrangler’s cold-hammer-forged barrel is available in only one length—a traditional 4 5⁄8“. 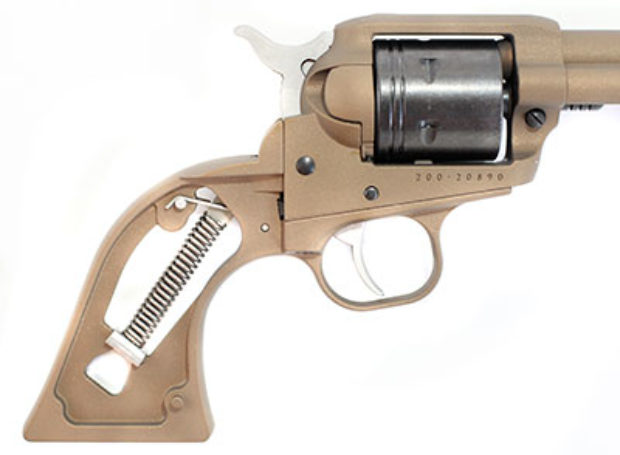 Ruger pioneered the modern single-action revolver that combined traditional external aesthetics with modern internals, as evidenced by the coil mainspring in the Ruger Wrangler.
–

Operation of the Wrangler will be familiar to anyone who has used Ruger’s New Model single-actions. With the hammer lowered, opening the loading gate lowers the cylinder latch, allowing the cylinder to spin freely for loading or unloading—a feature the manufacturer calls its “loading gate interlock.” The hammer cannot be cocked if the gate is open. Once loaded, it’s one click back for the hammer to reach the fully cocked position.

With no manual safeties, the Wrangler is rendered safe by its incorporation of a transfer bar system. Pulling the trigger raises a bar that allows the hammer to make contact with the frame-mounted firing pin. Without the trigger being pulled, the hammer cannot come into contact with the firing pin. Unlike a traditional Peacemaker clone, this makes it safe to carry the Wrangler with all six chambers loaded.

At 25 yds., the Wrangler averaged groups just smaller than 2 1/2″. The revolver’s trigger requires a pull of just more than 5 lbs., and control is aided by the Wrangler’s wide, non-traditional trigger. The sights are traditional—a front blade paired with a rear notch cut into the frame. According to the supplied manual, the Wrangler’s sights are regulated at 15 yds., though our test sample shot 1 to 2″ below the point of aim from 7 to 25 yds. Traditionally, with a fixed-sight single-action revolver, the point of impact can be adjusted to the point of aim by carefully filing down the front sight. 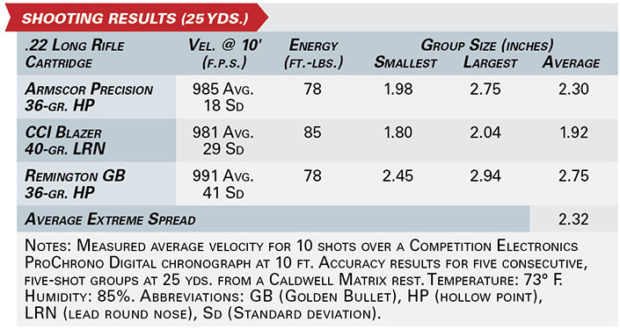 But the Wrangler’s role is not to precisely punch holes in paper from a bench; shredding cans and clanging steel plates off-hand is where it shines. A great way to introduce a new shooter to handguns, a single-action revolver is about as simple as a repeating firearm can get. When it comes to ammunition, our Wrangler was not a picky eater. It can handle .22 Shorts, Longs and Long Rifles of any power, bullet profile or weight, from subsonic to hyper velocity, hollow point to round nose.

For the experienced shooter, the Wrangler offers affordable practice for the single-action competitor, a rugged, reliable and safe companion for trips into the woods or just the grin-inducing fun that results when a single-action brings out the cowboy that is in all of us. With the Wrangler, Ruger has proclaimed that it plans to keep the single-action revolver—a quintessential American firearm—relevant and affordable well into the future. 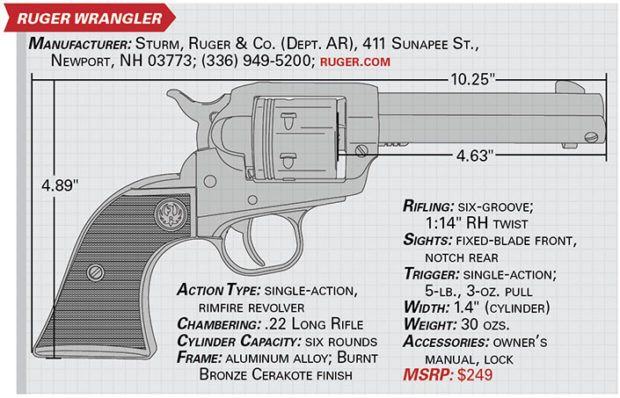