Israel and Ukraine have sparred over the Holocaust during the past few weeks, with Jerusalem accusing Kyiv of glorifying Nazi collaborators.

On January 13, the Israeli Foreign Ministry published a statement accusing Ukraine of rehabilitating historical figures who allied with Nazi Germany during World War II and participated in the Holocaust.

“Individuals responsible for the murder of Jews in the Holocaust and in pogroms, as well as antisemitic ideologists of the Ukrainian National movement have recently been subject of public glorification in Ukraine,” the statement said. (RELATED: Those Ukrainian ‘Volunteer Battalions’ Washington Has Funded? A Lot Of Them Are Neo-Nazis)

The Israeli Foreign Ministry’s statement comes just weeks after the Israeli and Polish ambassadors to Ukraine published a joint letter voicing alarm over the decision by Kyiv city officials to celebrate the 111th birthday of Stepan Bandera, a Ukrainian ultranationalist leader whose organization collaborated with the Nazis during World War II and organized purges against Jews and Poles living in Ukraine. 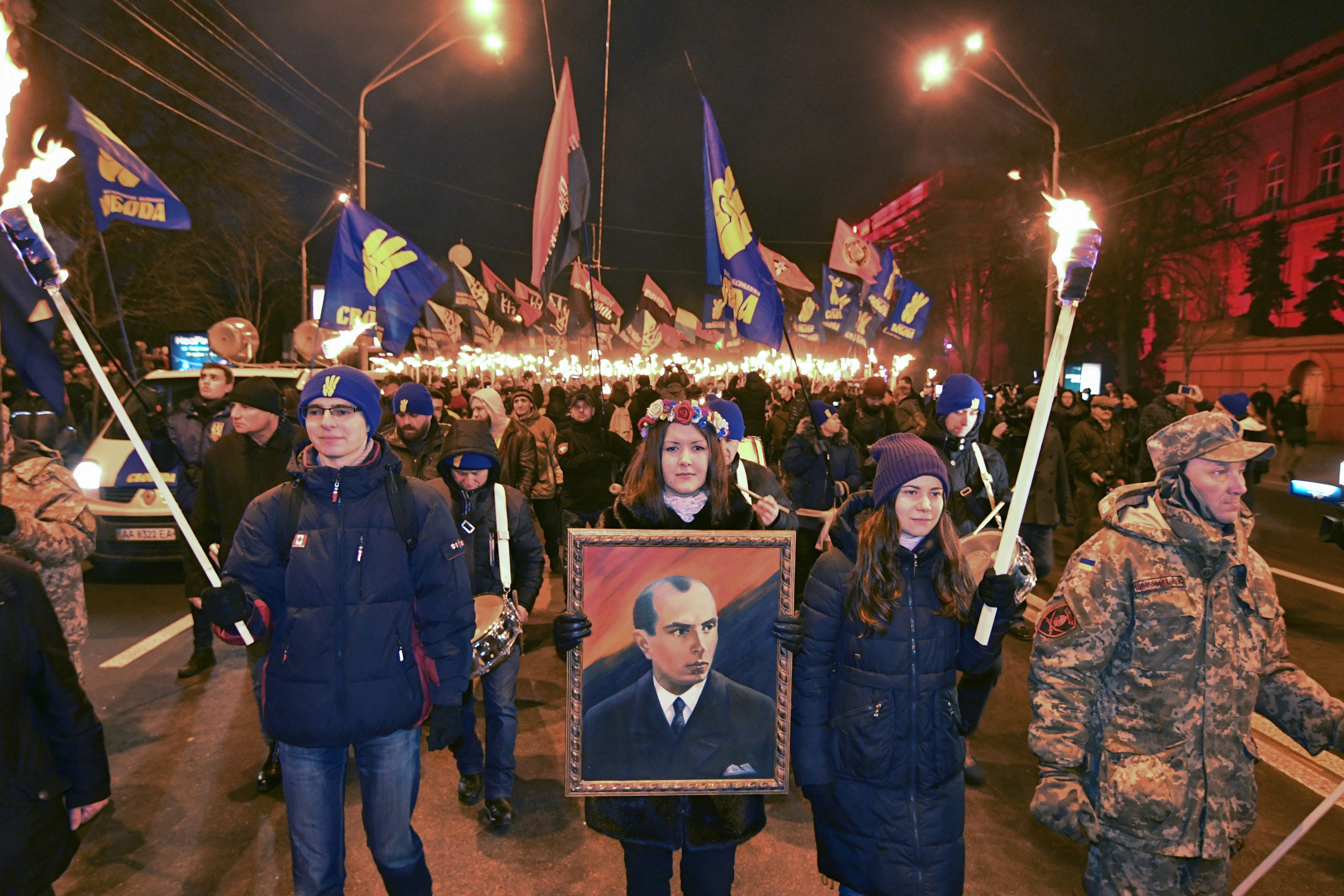 A woman (C) holds a portrait of Ukrainian politician Stepan Bandera, one of the leaders of Ukrainian national movement and leader of the Organisation of Ukrainian Nationalists (OUN) during a march in Kiev on January 1, 2018, to mark the 109th anniversary of his birth. / AFP PHOTO / GENYA SAVILOV (Photo credit should read GENYA SAVILOV/AFP via Getty Images)

The Ukrainian Ministry of Foreign Affairs responded by insisting that any decision to honor Bandera was an internal matter.

In 1941, Bandera’s Organization of Ukrainian Nationalists (OUN) issued a manifesto pledging “to liquidate undesirable Poles, Muscovites, and Jews.” According to many historians of the Holocaust, the OUN is responsible for killing thousands of Jews and around 100,000 Poles during the 1930s and 1940s.

Notwithstanding Bandera’s cooperation with Nazi Germany and role in the Holocaust, some Ukrainian officials have over the past several years sought to make him into a national hero. The Ukrainian Institute of National Remembrance estimates that 34 streets in Ukraine were renamed after Bandera in 2015 and 2016 alone. In late December 2018, the Ukrainian parliament voted to make Bandera’s birthday a national holiday.

Many of Bandera’s associates have also been honored by Ukrainian authorities. In June, the Ukrainian city of Ivano-Frankivsk unveiled a statue dedicated to Roman Shukhevych, a commander in the Ukrainian Insurgent Army who in 1943 orchestrated a mass ethnic cleansing campaign against Poles in modern-day Western Ukraine. Shukhevych previously commanded a battalion of Ukrainian nationalists assembled by the German military. 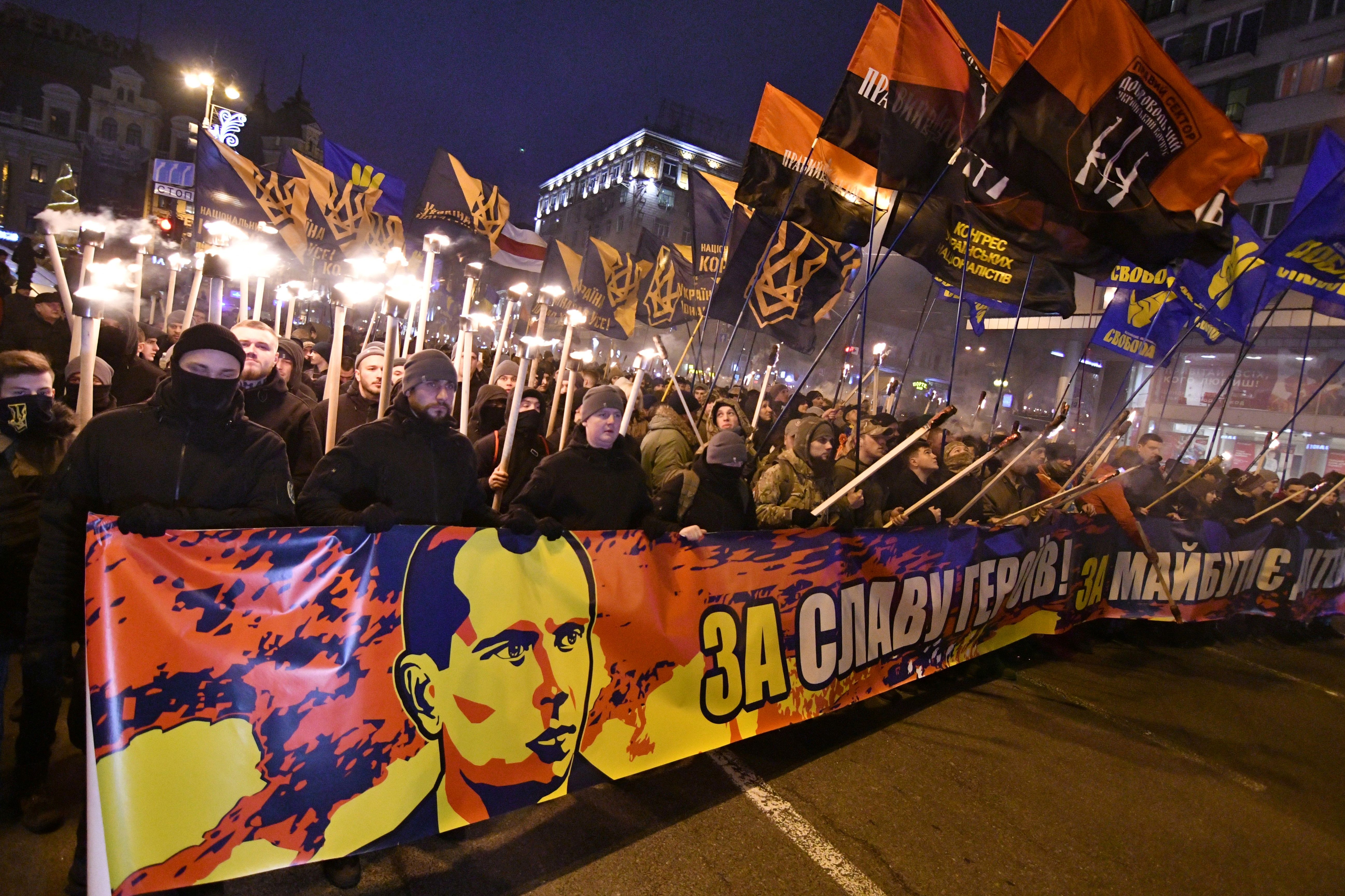 People hold torches and a banner during a march in Kiev on January 1, 2018 to mark the 109th anniversary of the birth of Ukrainian politician Stepan Bandera, one of the leaders of Ukrainian national movement and leader of the Organisation of Ukrainian Nationalists (OUN). / AFP PHOTO / GENYA SAVILOV (Photo credit should read GENYA SAVILOV/AFP via Getty Images)

Although Ukraine elected its first Jewish president in a landslide last April, ultranationalist groups hostile to Jews and other ethnic minorities still have powerful allies in the government. In particular, the Ukrainian Ministry of Internal Affairs has long maintained close ties with the Azov Battalion, a neo-Nazi paramilitary organization that has been accused of war crimes. Interior Minister Arsen Avakov has promoted several Azov veterans to senior positions within the country’s law enforcement. (RELATED: Student Wins $725,000 In Lawsuit Against Neo-Nazi Troll)

Ukrainian President Volodymyr Zelensky has sought to distance himself from those inside Ukraine who want to venerate Bandera and other German collaborators. In April 2019, Zelensky suggested that it would be better if more streets were renamed after “modern day heroes” and fewer after Bandera.

But even some members of Zelensky’s government have been caught courting Ukraine’s ultranationalists. In October, Ukrainian Prime Minister Oleksiy Honcharuk sparked controversy when photos emerged of him attending a neo-Nazi concert organized by an activist who was previously charged with murdering a journalist in 2015.