Once a rarity, pistols with optics have become commonplace in both the sport shooting and defensive carry realms. Out in the field, hunting with a handgun has been popular ever since sportsmen first realized that dragging a rifle through dense woods wasn’t always necessary in situations where most shots are taken within 50 yds. Naturally, it was only a matter of time before these two notions merged, and Taurus’ answer is the optic-ready Raging Hunter line of revolvers. Offered initially only in .44 Mag., the company expanded the line in 2019 to include multiple .357 Mag.- and .454 Casull-chambered models—an 8.44″-barreled version of the former being the subject of this review.

Considering the additional heft of an optic, it’s important for manufacturers to keep the weight of their large-frame revolvers down at manageable levels, which was a driving premise behind the Raging Hunter line. Taurus engineers endeavored to keep the Raging Hunter’s weight in check through the use of a lightweight stainless steel barrel surrounded by an aluminum-alloy shroud. During the manufacturing process, the barrel is first threaded onto the revolver’s frame, and then the shroud is assembled over it.

As it’s attached, the shroud slips over a post on the frame that ensures correct sight alignment. This Picatinny-rail-clad overlay is then secured to the barrel via a threaded bushing/nut that centers it to the barrel. The design results in an overall lighter package that is far less front-heavy than traditional revolvers of this size. Four ports have been drilled into each side of the barrel’s muzzle, as have elongated slots on the sides of the shroud, allowing a portion of the escaping gases to travel upward—helping to tame felt recoil and counteract muzzle flip.

The Raging Hunter has a seven-shot cylinder (l.) that swings open when dual cylinder locks on the left side of the frame are actuated.

–
The Taurus Raging Hunter’s reduced weight should not be mistaken for reduced strength, however, as it features dual cylinder locks. A secondary unit located in the crane locks into the frame forward of the cylinder to increase overall rigidity. This relationship helps to absorb the stress created by the energy of the igniting cartridge. Having a lock both fore and aft of the cylinder also improves the alignment of the bore to the chamber, which in turn improves accuracy. Once locked in place, the Raging Hunter employs a recess in the barrel shroud to keep the ejector rod protected from being bent against impact with foreign objects.

Our test revolver consisted of a black alloy-steel frame and a hard-anodized barrel assembly. As we swung out the seven-shot cylinder to ensure it was empty, we further observed the black-oxide finish of both it and the frame. In addition to all-black models like this one, two-tone Raging Hunters are also available. Dry-firing the gun gave us a feel for the overall heft and revealed the transfer bar safety that ensures the magnum revolver is drop-safe. With the hammer cocked, we were also able to observe the frame-mounted firing pin.

–
Of course, the Taurus Raging Hunter is a double-action revolver that can also be fired in single-action by manually cocking the hammer. After some dry-fire practice to both get a better feel for the gun and to smooth out the trigger, we used a trigger pull gauge to measure the trigger’s break in both double-action and single-action modes; the former yielded an average result of 15 lbs., while manually thumbing the hammer back reduced the force needed to drop the hammer to 7 lbs., 6 ozs. Despite both figures being relatively heavy, the pulls were pleasantly smooth; regardless of whether the hammer was cocked or not, there was absolutely zero creep or slack.

In familiarizing ourselves with the gun, we also took notice of the ultra-comfortable stock employed by this revolver. Held in place by a single screw, the entire component is molded from soft-touch rubber, and a cushioned red insert along the backstrap proved to be very effective in absorbing the Raging Hunter’s recoil.

While adding an optic to most pistols requires some modification to the gun, the Raging Hunter’s Picatinny rail allows for effortless installation of your favorite red-dot sight or even a pistol scope. Our test pistol’s 8.44″ barrel length afforded us 13 slots with which to place the Bushnell Advance Micro Reflex Sight used during testing. Although optics are desirable they are not mandatory, as the Raging Hunter comes with a fully adjustable rear sight and a fixed front post, allowing the user to dial-in and hit the field immediately.

On the range we tested ammunition of various bullet weights and profiles from Remington, SIG and Aguila. We fired in both double-action and single-action for function testing, however, all accuracy testing was performed in single-action to help eliminate shooter error. While function was flawless across all three brands of ammunition, the Raging Hunter was picky when it came to which was the most accurate.

We found that the Aguila and Remington loads produced the best groups of the day, with five shots consistently landing within 1.5″ of one another. The SIG ammunition did not group well, but was likely designed for smaller defensive pistols. Our best group belonged to the Remington HTP 158-gr. semi-jacketed hollow points, and measured only 1.23″. Overall handling was excellent, as the ported barrel, combined with the recoil-reducing stock, really took the pain out of the typical magnum shooting experience. The reduced muzzle flip also allowed us to spot hits as they landed on our target, something essential when confirming impact on game. 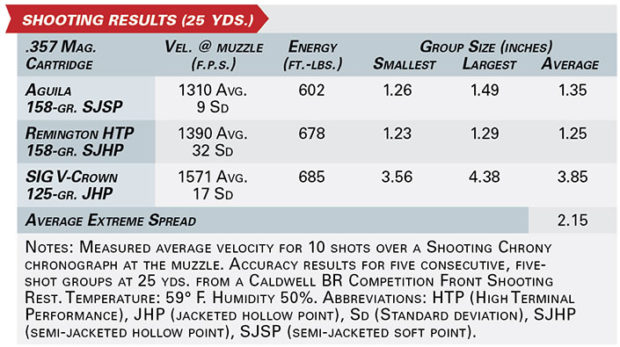 –
Overall, we thought Taurus did a great job in making a hunting revolver that is accurate and far less cumbersome than similar-sized handguns on the market. We were impressed with how light the recoil was and how enjoyable it was to send more than 300 rounds of .357 Mag. ammunition downrange in a single session. The Taurus Raging Hunter is an exceptional revolver for those handgun hunters looking to take whitetail at short range, and the enjoyable ergonomics leave no excuse to not practice all year ‘round. 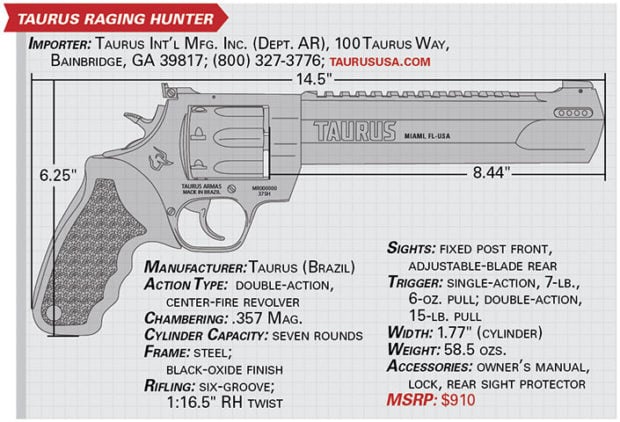