“That’s great, but when will you have a 9 mm?” If not discounted out of hand, that was one of two likely responses to the Smith & Wesson M&P380 Shield EZ chambered in .380 ACP. The other was, “I’ll take it.”

This gun in its .380 guise represented a solution to what many gun company executives didn’t even know was a question. And while the industry was consumed by a no-longer-Quixotic quest to cram the maximum number of 9 mm rounds into the smallest possible package, an entire class of consumers was, perhaps, not given due consideration or engineering attention—until the Shield EZ.

We thought so much of the gun—and of the lawful armed citizens whose needs it was intended to address—we put it on this magazine’s cover, June 2018, p. 56. It also came out on top of 25 other guns in the Ladies Pistol Project 3 — and notched the 2019 Golden Bullseye for American Rifleman Woman’s Innovation Product. But this isn’t just a girl gun. Those features that made it appeal to women also made it of interest to others. Managing Editor Kelly Young addressed these folks in “The Aging Defender,” which is worth reading even if you aren’t the target demographic for Centrum Silver.

When news of the 9 mm arrived, several of the editors were sitting in my office, and I was looking for a volunteer to write the story on short notice. That’s when Senior Executive Editor Brian Sheetz just looked at me deadpan and said, “If only we had the author of the .380 cover story right here.” It turns out I was that guy.

Is the M&P380 Shield a thing? Is it here to stay? If not, S&W would not have introduced a Performance Center model. Nor would there be a version in 9 mm Luger, the M&P9 Shield EZ. Frankly, who doesn’t appreciate a gun with an easy-to-load magazine, a slide that’s easy to rack and a takedown lever that won’t cost you a thumbnail?

So, What Makes The M&P9 Shield EZ Easy?

What the M&P Shield EZ line does is make it easier for those without a lot of hand strength or manual dexterity to efficiently operate their pistols. The U.S.-made, recoil-operated polymer-frame guns have 18-degree grip angles, and they are actually a little larger than the standard 9 mm M&P9 Shield.

An internal hammer is one of the keys to the ease of cocking effort. Even though they look like striker-fired pistols, these are hammer-fired guns. Much like some call the S&W Model 442 revolver “hammerless,” there’s one in there—you just can’t see it. Too, you have mechanical advantage on the EZs’ low-mounted internal hammers as you rack the slides.

The M&P9 Shield EZ fieldstrips in the typical manner and consists of subassemblies that do not appear out of the ordinary. The secret to its easy-to-operate slide, controls and magazine are in the details: effective scallops on the slide’s front and rear; a low-mounted internal hammer (inset, arrow); and tabs on the single-column magazine’s follower (r., arrow) that make it easier to load than many double-stack models.
–

Speaking of slide racking, there are short scallops cut on the slide’s fronts above the frame’s Picatinny rail slots, but then there are full-height scallops on the slide’s rear. In addition, there are subtle ears (adding about an extra 0.10″) machined integrally with the slide’s back, giving the shooter something to grab onto when working the black Armornite-finished, stainless steel slide.

Both EZs accept single-column, detachable eight-round magazines (for the 9 mm it’s 1.25″ deep and 0.56″ across). By not going double-stack, single-feed, loading effort is reduced. There’s enough room inside the frame for tabs on either side of the orange follower, allowing one to really get a hold of it and depress it for loading without having to reach for one’s trusty Maglula. Other EZ traits include minimum spring tension on the slide lock/release and the takedown lever. They stay in place, but you don’t need to be the Hulk to overcome them.

A distinctive Shield EZ feature is its grip safety, which is pinned at the frame’s bottom and prevents the gun from firing unless depressed with a firm grip. But it does more than just act as a safety. If not depressed, the passive firing safety, which protrudes down from inside the slide, is not lifted up by its frame-mounted plunger, and the firing pin cannot move forward if hit by the hammer.

Since the ascendancy of guns like the Glock 17 and its ilk, many polymer-frame duty and service pistols do not have manual frame- or slide-mounted safeties. For the EZ, though, according to a couple of reliable retailers, the ratio can be as high as three to one with a preference for the manual safety over slick slides. This customer, apparently, is a belt-and-suspenders kind of person. You get not only the grip safety but can have bilateral manual safeties at no extra charge.

The grip safety pivots at the bottom of the backstrap (l.). It is linked to the disconnector/trigger bar/sear assembly (ctr.). The flat-wire recoil spring rides on a steel guide rod (r.).

The Change To the 9 mm Shield EZ

In upgunning the EZ to 9 mm, Smith engineers tried to keep as much the same as possible. Overall length for the 9 mm is 6.86″ with a 3.67″ barrel, and the height is 4.98″, pretty close to the .380. There are dimensional variations to the frame, which had to be completely re-molded, and Smith & Wesson believed the demand is there to justify that expense. Even though the polymer grip frame is slightly deeper to accommodate the longer 9 mm cartridge, trigger reach is the same for both at 2.69″ thanks to a slight difference in trigger geometry. None of the major components—meaning the frames, slides, magazines and springs—are interchangeable between chamberings.

One of the ways you deal with additional recoil is by increasing mass. Weight on the 9 mm is 23 ozs., as compared to 18.5 ozs. with the .380. The M&P380 EZ’s slide weighs 6.9 ozs., while the blockier 9 mm slide weighs 10.2 ozs. That difference is appreciable in the hand—and appreciated due to the increased recoil of the 9 mm.

There is also an increase in recoil spring tension—the 9 mm has a single coil flat spring. With the frames chucked into a vice with a sturdy clamp on the slides and using a fish-type scale, the .380 EZ came in at 9 lbs. of cocking effort while the 9 mm EZ registered 13 lbs., which is in marked contrast to the 23 lbs. required for a standard M&P9 Shield in 9 mm.

There are slight differences in length and width between the M&P380 Shield EZ (top) and the M&P9 Shield EZ (bottom).

A petite neighbor of mine liked the .380 EZ very much, but her ex-federal-officer husband talked her out of it, telling her that .380 was an inadequate defensive cartridge. He argued her gun had to be 9 mm or larger. Period. Instead of the M&P380 EZ she liked and handled at the gun shop counter, she ended up with the gift of a .40 S&W Glock 23 she can barely rack and tends to avoid shooting.

Volumes have been written about .380 ACP and 9 mm. Both have projectiles that measure 0.355″ across, but the difference comes in the case length and cartridge overall length; 0.680″ and 0.754″ for the .380, while for the 9 mm it’s 0.984″ and 1.168″, respectively. In short, the 9 mm has more case capacity, meaning more propellant, and it can accommodate heavier projectiles than the .380. Selecting from a popular and effective self-defense line, Speer Gold Dot Personal Protection, can give us some numbers to compare.

The 9 mm EZ was fired for accuracy at 15 yds., and the accuracy results can be found in the accompanying table. Two guns were function-fired—one a slick-slide and another with the thumb-safety—by nine different staffers without a hitch to the tune of more than 600 rounds. One small-statured shooter who had trouble with a stock M&P9 Shield going back into battery ran the EZ without issue.

Self-defense is probably the main reason for upping the EZ to 9 mm. No one disputes that the 9 mm Luger is more effective than the .380 ACP given proper defensive ammunition. But there’s more to it. One of the reasons for the increased popularity of the 9 mm is cost. When you make a lot of something, you gain efficiencies and ultimately can charge less for it. All of the major ammunition factories in this country, and frankly all of the world, make 9 mm pretty much all day every day.

One of the things that the 9 mm EZ does is serve as a crossover platform. If the user can handle the increased recoil, it opens up a whole new world in terms of affordable ammunition. The M&P9 Shield EZ takes the platform into a new arena by retaining the ease of operation, while increasing its defensive capability, and reducing the cost of shooting for practice and for fun. 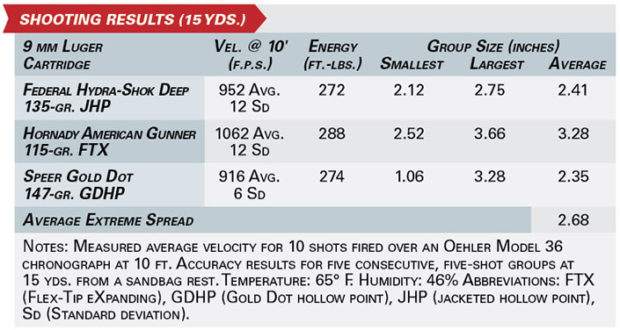 Every gun is a compromise. Those who embraced the .380 EZ knew it was on the lower edge of the accepted threshold for defensive cartridges, but balanced its ease of operation with its shortcomings. With the M&P9 Shield EZ, thanks to modern defensive 9 mm Luger, you are not compromising on bullet performance. Maybe these guns will get shot a little more, and their owners will become more confident and proficient.

That neighbor I mentioned earlier? Her husband is getting a slightly used Glock for his birthday … and half a box of .40 S&W. 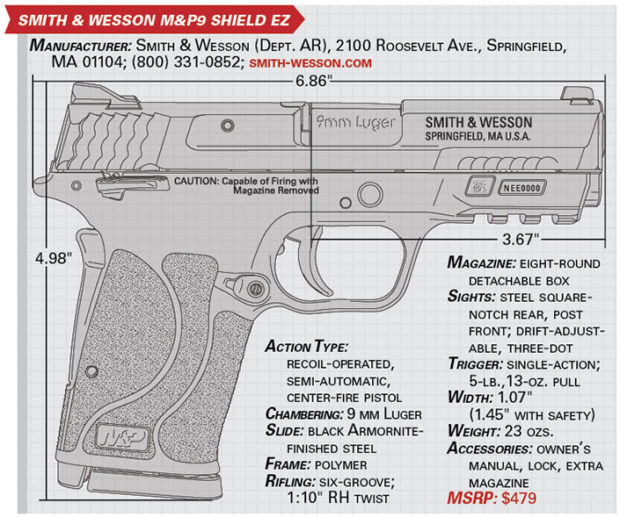