President Donald Trump’s ambassadorial appointees are purging their embassies of career State Department officials at near-unprecedented rates, and Trump’s impeachment win against the “deep state” won’t be ending it.

Trump’s envoys to Canada, France, Iceland, Romania, South Africa, and the United Kingdom all removed their second-in-command soon after or even before arriving to their embassies, according to Foreign Policy. The firings matched with Trump’s loudly-spoken suspicion that career officials were working against his administration’s efforts, a phenomenon he dubbed “the deep state.”

Many saw confirmation of these suspicions in the various federal officials who worked against Trump from the FBI during the Russia investigation, as well as from the State Department during the Ukraine investigation

One of the most recent and consequential targets in Trump’s conflict with career officials was Marie Yovanovitch, the former U.S. ambassador to Ukraine. She was forced out of her position in the midst of the military aide incident for which Trump was impeached and ultimately acquitted. She testified to Congress that the Trump administration’s dealings with Ukraine weren’t above board. (RELATED: Former CIA Director Praises ‘Deep State’)

“When civil servants in the current administration saw senior officials taking actions they considered deeply wrong in regard to the nation of Ukraine, they refused to take part. When Congress asked us to testify about those activities, my colleagues and I did not hesitate, even in the face of administration efforts to silence us,” She wrote Thursday in the Washington Post. “I have seen dictatorships around the world, where blind obedience is the norm and truth-tellers are threatened with punishment or death. We must not allow the United States to become a country where standing up to our government is a dangerous act.”

Yovanovitch is far from the first state department official to publish a resignation letter in the pages of a major American newspaper, however. Bethany Milton resigned from her position in Rwanda in the New York Times in August 2019, claiming Trump’s policies were “small-minded chauvinism.” The Washington Post published Chuck Park’s resignation from his position in Mexico the same month. He resigned for much the same reason as Milton. 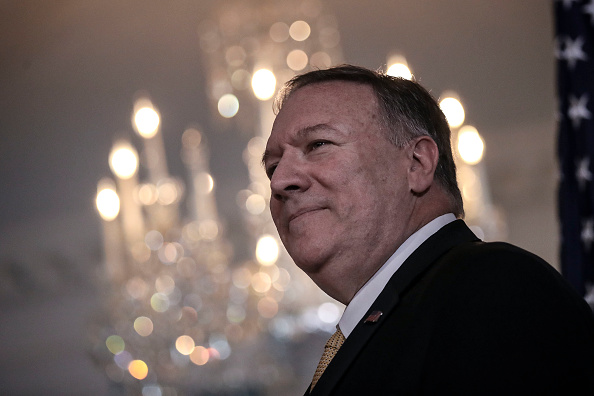 WASHINGTON, DC – NOVEMBER 18: U.S. Secretary of State Mike Pompeo looks on during a brief photo opportunity before a meeting with Republic of Cyprus Foreign Minister Nikos Christodoulides at the U.S. Department of State on November 18, 2019 in Washington, DC. Pompeo is scheduled to meet with U.S. President Donald Trump later on Monday afternoon. (Photo by Drew Angerer/Getty Images)

But the Trump administration has been less concerned with the officials who publicly oppose his priorities and resign than with those who privately oppose the administration but choose to remain in their positions. (RELATED: ‘It Was All Bullsh*t’: Trump Blasts Dems For Impeachment)

And there is no shortage of examples of just this sort of official. The New York Times infamously reported on the existence of #Resistance members within Trump’s Consumer Financial Protection Bureau.

Some employees, including a few of the bureau’s top officials, have welcomed their new leader. Others, pointing to Mr. Mulvaney’s earlier hostility toward the agency and its mission, are quietly resisting. One small group calls itself “Dumbledore’s Army,” according to two of the people who were familiar with their discussions. The name is a reference to a secret resistance force in the “Harry Potter” books.

An atmosphere of intense anxiety has taken hold, several employees said. In some cases, conversations between staff that used to take place by phone or text now happen almost exclusively in person or through encrypted messaging apps.

Distrust between Trump appointees and the officials who are ostensibly their employees is unsurprising. Nearly 100 former state officials signed a letter supporting the Ukraine whistleblower in October, some of whom had only resigned as recently as 2018.

The argument from Trump’s critics, however, is that his appointees are often hopelessly unqualified. They point to examples like Lana Marks, a Mar-a-Lago member and fashion designer who was appointed the U.S. Ambassador to South Africa in January. Aside from being born in South Africa, Marks – a fashion designer – has virtually no experience as a diplomat.

Marks forced out her 2nd-in-command, career official David Long, and several others soon after taking command, according to FP. She also raised eyebrows by trying to secure a job for her son at the embassy. The State Department ultimately sent two officials to mediate the transition process. (RELATED: The Real Reason Mitt Romney Voted To Convict Trump)

Trump is far from the first president to appoint high level donors and supporters to ambassadorships, however, and it’s unlikely that Trump appointees’ relationships with career officials will improve following the end of the president’s impeachment ordeal.

The administration is as suspicious of the “deep state” as ever, with some Trump spokespeople saying he is seeking consequences for those who orchestrated the “witch hunt.”

“I think he’s also going to talk about just how horribly he was treated and, you know, that maybe people should pay for that,” White House Press Secretary Stephanie Grisham said on Fox News.