The versatility of pistol-caliber rifles and carbines is undeniable, and their popularity has skyrocketed as of late. The light-recoiling long guns are easier to shoot accurately than their handgun counterparts, and their longer barrels contribute to higher velocities and, correspondingly, more energy on target. Depending on the chambering, these guns can make great hunting or animal-control guns, and many folks leave them stored in their vehicles for emergency use. For home defense, pistol-caliber long guns often get the nod over a shotgun based on capacity alone. The Henry Big Boy All-Weather would make an ideal pick for a truck or home-defense gun for all the reasons mentioned above, and we recently received a test sample chambered for the .45 Colt cartridge.

Henry Repeating Arms introduced the Big Boy All-Weather in 2017 after seeing the tremendous success of its .30-30 Win. and .45-70 Gov’t rifles with the All-Weather treatment. Though the original Henry Big Boy uses a brass receiver, the All-Weather gun instead utilizes a steel receiver, and both it and the barrel are plated with an industrial hard chrome to provide plenty of corrosion resistance—giving it the ability to stand up to the elements and long periods of inattention.

The internals of the All-Weather model are identical to the brass-framed Big Boy, though the brass guns are normally about a pound heavier because they use a heavier octagonal barrel. The All-Weather rifle uses a rubber recoil pad while the original Big Boys use a brass buttplate. Henry outfits the All-Weather model with an American walnut stock and fore-end, both of which are given a tough, black polyurethane finish. The buttstock provides a 14″ length of pull and has already been fit with a sling swivel stud, and the fore-end has a steel cap also fitted with a stud.

While many of the lever-action rifles on the market today are derivations of guns designed more than a century ago, the Big Boy features all-new engineering and coil-spring construction. The Henry rifle is of robust design, with a solid-top receiver and no cuts for a loading port. Henry drills and taps the top of the Big Boy All-Weather’s receiver, and both Picatinny rail and a rings/base set are available for this model.

(l.) The Henry Big Boy All-Weather’s solid-top receiver is drilled and tapped for the installation of an optics rail. Hard chroming of the steel receiver both provides corrosion resistance and results in an attractive finish. The sights consist of a folding semi-buckhorn rear unit (ctr.) and a brass bead front (r.). Similar to many rimfire lever-action rifle designs, the rifle loads via a tubular magazine mounted beneath the barrel.

–
We examined the Big Boy All-Weather and found its construction to be well-executed and displaying a good deal of attention to detail. The lever of our test gun worked smoothly, and we found very few machine or tool marks. The wood-to-metal fit around the buttstock was exemplary.

There are no manual safeties on the Big Boy, but it can be safely carried with a round in the chamber and the hammer down thanks to a transfer bar safety that prevents the gun from firing unless the hammer is cocked and the trigger pulled. There is no half-cock on the hammer. Trigger pull on our test sample measured 3 lbs., 12 ozs., and it did possess a little bit of creep, but for a general-purpose or home-defense gun, it seemed to be appropriate.

Henry sent us a Picatinny receiver mount that attaches to the receiver top with three screws. We used medium-height scope rings to attach a Leupold VX-2 2-7X 28 mm Ultralight scope with a Duplex reticle. It has precise 1/4-m.o.a. finger-click adjustments for windage and elevation, and seemed perfect for the Big Boy All-Weather. We fired all groups from a seated position using a DOA Tactical portable shooting bench and a Caldwell rifle rest with our targets set out at 50 yds.

Federal’s 225-gr. lead semi-wadcutter hollow point printed the best five-shot group, measuring just 1.18″. This load also had the smallest aggregate group size of 1.69″ for five groups. While chronographing the Henry Big Boy we brought along a Taylor Firearms 1873 Cattleman also chambered in .45 Colt, with a 4¾” barrel, for comparison. What we found was that the Henry’s extra 15¼” of barrel accounted for 21 percent more velocity. More importantly, that extra velocity also equated to 37 percent more energy. 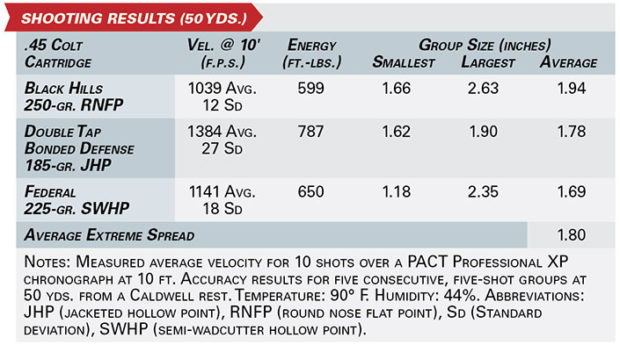 Henry Repeating Arms currently offers the Big Boy All-Weather in three different handgun chamberings; in addition to the .45 Colt tested here, .44 Mag. and .357 Mag. guns are also available. Besides the All-Weather, Henry offers other models of the Big Boy rifle in a variety of barrel lengths, chamberings and finishes.

Henry’s Big Boy All-Weather proved to be both accurate and reliable during our testing. The gun is of robust design, is well-constructed and finished to stand up to a lifetime of hard use with minimal care. For those looking for a pistol-caliber long gun capable of handling a multitude of chores, the Henry Big Boy All-Weather certainly deserves consideration.