Hunter Biden was on the board of a trade coalition that lobbied the Obama administration in 2014 on foreign assistance to Ukraine, and appears to have set up a State Department meeting for the group’s president.

The Bidens have been dogged by allegations that the younger Biden profited off of his last name. Similar allegations have followed organizations like Ukrainian natural gas company Burisma Holdings, which brought Hunter Biden on as a director in April 2014, despite his having no experience in the energy industry.

USGLC, which lobbies and advocates for increased spending in the State Department’s International Affairs Budget, added a series of Ukraine-related bills to its lobbying portfolio at around the same time, lobbying disclosures show.

Biden’s private equity firm, Rosemont Seneca, was by far the smallest company of any of the directors on USGLC or the Center for U.S. Global Leadership.

Other directors have included executives and lobbyists from Caterpillar, Cargill, Walmart, Intel, Chevron, and the U.S. Chamber of Commerce. Think tanks such as the Bipartisan Policy Center and the American Enterprise Institute are represented on the group’s boards, as are officials with well-known NGOs like Save the Children and CARE, the anti-poverty group.

But what Rosemont Seneca lacked in terms of assets and name recognition it made up for in access to key figures in the Obama administration, with Joe Biden being at the top of the list. 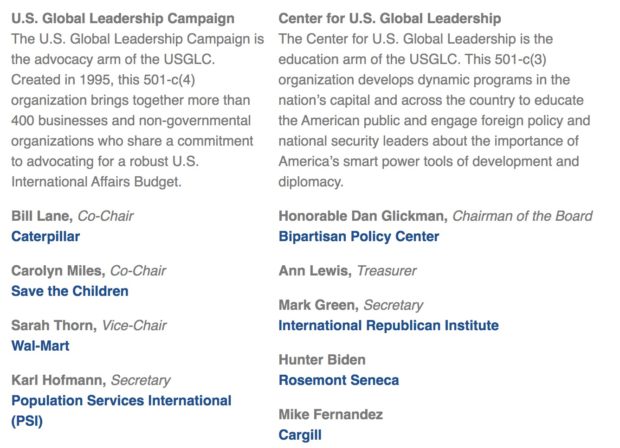 The value of those political connections was highlighted in text messages cited in an unrelated criminal case against Archer.

“Hunter Biden works for [Archer]. So we’ve got the top level politicos with us. All of my guys, is as top tier as it gets,” a businessman named Bevan Cooney wrote in text messages released in Archer’s case.

“You don’t get more politically connected and make people more comfortable than that.”

Hunter Biden has publicly referred to himself as a member of USGLC’s board, though he was technically a director of the Center for U.S. Global Leadership.

Tax filings show that Biden was on the center’s board from 2012 through 2018.

In 2014, while affiliated with the groups, Biden joined the board of Burisma Holdings. The company, owned by Mykola Zlochevsky, who served as minister of natural resources under former Ukrainian President Viktor Yanukovych, paid Rosemont Seneca, Biden’s firm, more than $80,000 a month, according to publicly available records.

That partnership raised some eyebrows at the time because of Joe Biden’s role as the Obama administration’s main point man on Ukraine issues. Like many Ukrainian firms, especially those in the energy business, Burisma had a reputation for corruption. Hunter Biden’s link to the company was seen as undermining his father’s anti-corruption initiatives.

As part of his Ukraine initiative, Joe Biden pushed for increased aid to the former Soviet republic in the wake of its overthrow in February 2014 of Yanukovych, the Ukrainian president. But in 2016, he would threaten to withhold $1 billion in loan assistance to Ukraine that was made available through some of the very same legislation for which USGLC and some of its business partners lobbied.

The group, which advocates and lobbies for increased spending in the State Department’s International Affairs Budget, added Ukraine to its portfolio of lobbying issues in April 2014, according to lobbying disclosure form filed with Congress.

USGLC is not well known outside of Washington, D.C. Founded in the mid-1990s, the coalition is made up of more than 400 major corporations and non-government organizations (NGOs), a mix that has earned the group the nickname the “strange bedfellows coalition” inside the Beltway. (RELATED: Consultant For Firm Linked To Hunter Biden Sought State Department Meeting To Downplay Corruption Concerns) 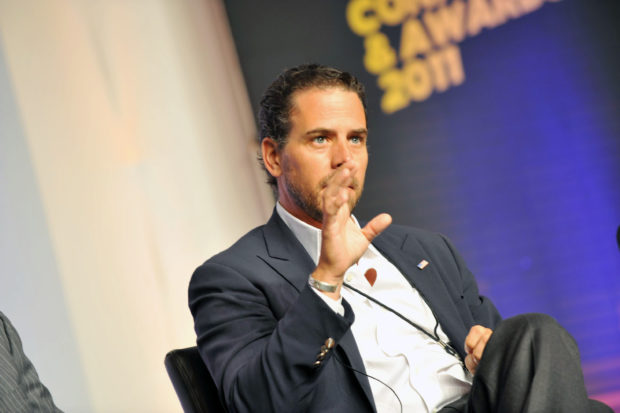 Erik Lundsgaarde, a political scientist with the German Development Institute, wrote in “The Domestic Politics of Foreign Aid,” that USGLC formed in response to “dramatic budgetary cutbacks affecting aid spending.”

“The goal of the founders of the USGLC was to build a coalition capable of conducting professional lobbying to stave off further spending reductions and to advocate funding increases,” Lundsgaarde wrote.

The group engages in standard lobbying — Congress, the State Department and the U.S. Agency for International Development (USAID) are its biggest targets — but also hosts events that allow members to rub shoulders with policymakers, diplomats and other corporate executives.

One of those events was held in Washington on Dec. 13, 2013, to honor Joe Biden for his advocacy for increased international spending.

Marillyn Hewson, the CEO of Lockheed Martin, the defense and aerospace giant, introduced Hunter Biden to in turn introduce his father as the honoree of the event. During her remarks, Hewson spoke of using the coalition formed by USGLC to improve conditions in impoverished countries.

But she also spoke candidly about the financial benefits for USGLC’s corporate partners of increased international aid spending.

“For Lockheed Martin and the hundreds of business that are gathered here tonight, there is simply no choice about whether to be engaged in important global issues,” Hewson said.

“Today, 95% of the world’s consumer’s live outside of the U.S. and over half of our exports already go to over a half of the developing world, a number that’s only going to grow. The International Affairs Budget is absolutely critical to our future.”

Biden introduced himself at the event as a board member of USGLC rather than the Center for U.S. Global Leadership.

“USGLC is an important organization, and I am very proud to serve on their board,” he said.

During his speech, Joe Biden offered a full-throated defense of increases to the international aid budget; an endorsement that was in line with USGLC’s initiative. Biden also praised Raj Shah, the then-administrator of USAID who shares the name of a former Trump White House official, as “one hell of an effective guy.”

He said how he had recently talked to Yanukovych and urged him to negotiate with opposition parties, and set foot on a path to democracy.

“We hope he leads his country back to its European future, but he needs help because it’s in the fundamental interests of the United States that Ukraine succeed,” Biden said.

“The door is open but the Ukrainian people have to know that America stands with them on the side of universal rights, democratic principles and economic assistance.”

He also mentioned Elizabeth Schrayer, the president and CEO of USGLC and the Center.

“Liz, we’ve worked a lot together on foreign policy and other iterations, as well as here,” he said.

While Schrayer is deeply connected in Washington in her own right, Hunter Biden appears to also have helped her obtain access to the Obama administration.

“Sorry for the late thank you — appreciate you taking the meeting with Liz last week,” Hunter Biden wrote in an email on March 15, 2013, to David Wade, the chief of staff to then-Sec. of State John Kerry. “When things settle (relatively speaking) lets grab coffee.”

A spokesman for USGLC said the meeting was an introductory meeting between the coalition and the incoming Kerry team at the State Department.

“Over the past two decades, we’ve met with every Chief of Staff – Republican and Democratic Administrations – to talk about our work to strengthen support for the State Department. This was a typical introductory meeting with some of our leadership,” USGLC spokesman Sidney Traynham told the Daily Caller News Foundation.

Months after Joe Biden’s remarks at the USGLC event, after the Ukrainian evolution led to Yanukovych’s ouster, President Obama tapped his vice president to help the new Ukrainian government implement democratic reforms, which included a fight against corruption.

Hunter Biden and USGLC took interest in Ukraine at around the same time.

Lobbying records show that USGLC paid $50,000 to lobby on a host of foreign aid measures in 2014, including several bills to provide billions of dollars in aid and assistance to Ukraine.

Its lobbying disclosure forms from April, July and October 2014 list lobbying activities on four separate Ukraine-related bills, including the Support for the Sovereignty, Integrity, Democracy and Economic Stability of Ukraine Act of 2014, the Ukraine Support Act, and the Ukraine Freedom Support Act of 2014.

Cargill, Coca-Cola, Chevron, Caterpillar and the U.S. Chamber of Commerce all lobbied on Ukraine-related bills in 2014 and 2015.

Traynham, the spokesman for USGLC and the Center for U.S. Global Leadership, said USGLC is broadly focused on increased spending on international development, and that the Ukrainian revolution in 2014 was a natural focus for the organization. He did not address whether Hunter Biden discussed Ukraine with anyone from the trade coalition.

“The Center for U.S. Global Leadership is a non-profit organization and individuals volunteer their time to serve on our board to advance our mission to create a better, safer world,” Trayham said in a statement.

“The organization advocates on only one issue: the overall importance of the International Affairs Budget, which seeks to strengthen America’s global leadership through diplomacy and global development,” he added.

The statement also said that Hunter Biden joined the center’s board “while serving as Chairman of the World Food Program USA.” Biden was on the board of the organization, but USGLC and the Center for U.S. Global Leadership cited his affiliation with Rosemont Seneca, the private equity firm, on its website. 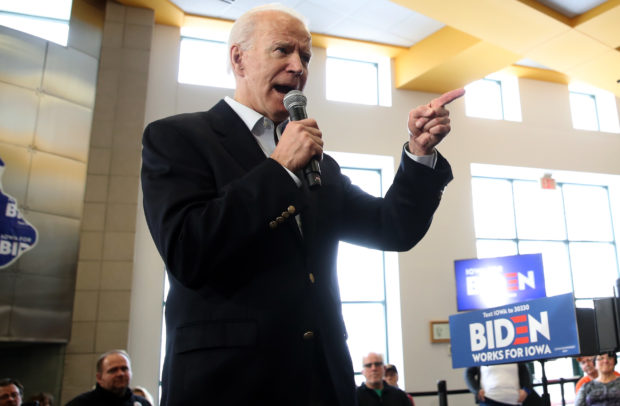 In a twist of irony, Joe Biden would later use U.S. aid to Ukraine that was provided through Sovereignty, Integrity, Democracy and Economic Stability of Ukraine Act of 2014 to influence Yanukovych’s successor as president, Petro Poroshenko.

Biden’s maneuver was not known until January 2018, when the future Democratic presidential candidate bragged at a Council on Foreign Relations event that he dangled the loan assistance over Poroshenko to get him to fire Shokin.

“And I went over, I guess, the 12th, 13th time to Kiev. And I was supposed to announce that there was another billion-dollar loan guarantee. And I had gotten a commitment from Poroshenko and from Yatsenyuk that they would take action against the state prosecutor. And they didn’t,” Biden said at the event.

He said as they were going to an event, he told his Ukrainian counterparts that he was not going to provide the billion dollars.

“They said, ‘you have no authority. You’re not the president,'” Biden recalled.

“Well, son of a bitch, he got fired. And they put in place someone who was solid at the time.”

The U.S. and Ukraine signed an agreement for the loan support months later, on June 3, 2016.

Trump allies have seized on the remarks and Hunter Biden’s role with Burisma to accuse Joe Biden of corruption. Rudy Giuliani, the lawyer for Trump, discovered and began hyping the Biden video from 2018 as evidence of corruption on the part of the former vice president.

Trump was so enamored with the theory that he brought it up during a July 25, 2019, phone call with Poroshenko’s successor, Volodymyr Zelensky. That call eventually led to Trump’s impeachment after a CIA whistleblower alleged in a complaint filed Aug. 12, 2019.

Joe Biden has denied ever intervening with Poroshenko on behalf of his son, or Burisma. Biden and his defenders have also challenged the idea that Shokin was investigating or planned to investigate Burisma, or that Joe Biden was ever aware of an investigation.

Hunter Biden’s lawyer, George Mesires, did not respond to a request for comment.