When former Secretary of State Hillary Clinton won the popular vote by a massive margin in the 2016 presidential race and still lost the election, backlash ensued.

However, when Independent Vermont Sen. Bernie Sanders narrowly lost the Iowa primary in February but won the popular vote, the media was silent.

Iowa’s latest numbers, following a re-canvass of several precincts after a chaotic primary, put Sanders with 45,831 in the popular vote count, The Hill reported Tuesday. Former South Bend, Indiana, Mayor Pete Buttigieg came up short for the popular vote with 43,273. Still, Buttigieg appeared to edge out the Vermont senator by 0.08 state delegate equivalents.

As Sanders has surged in the polls – taking a double-digit lead in two polls ahead of Wednesday’s ninth Democratic debate – members of the media have declined to defend (or even back) him as many did for Clinton in the run-up to the 2016 election. The outrage over his loss in Iowa is missing, and how the media typically reports on Sanders indicates it could be intentional. (RELATED: MSNBC’s Chris Matthews Predicts Electoral Disaster For Democrats Under Bernie Sanders)

Sanders’ campaign manager Faiz Shakir went after some of the legacy outlets over its coverage of the candidate during an interview Tuesday with Vanity Fair. He said that Fox News, despite pointing out Sanders’ preference for socialism, is “more fair” than MSNBC.

“Fox is often yelling about Bernie Sanders’s socialism, but they’re still giving our campaign the opportunity to make our case in a fair manner, unlike MSNBC, which has credibility with the left and is constantly undermining the Bernie Sanders campaign,” according to Shakir. 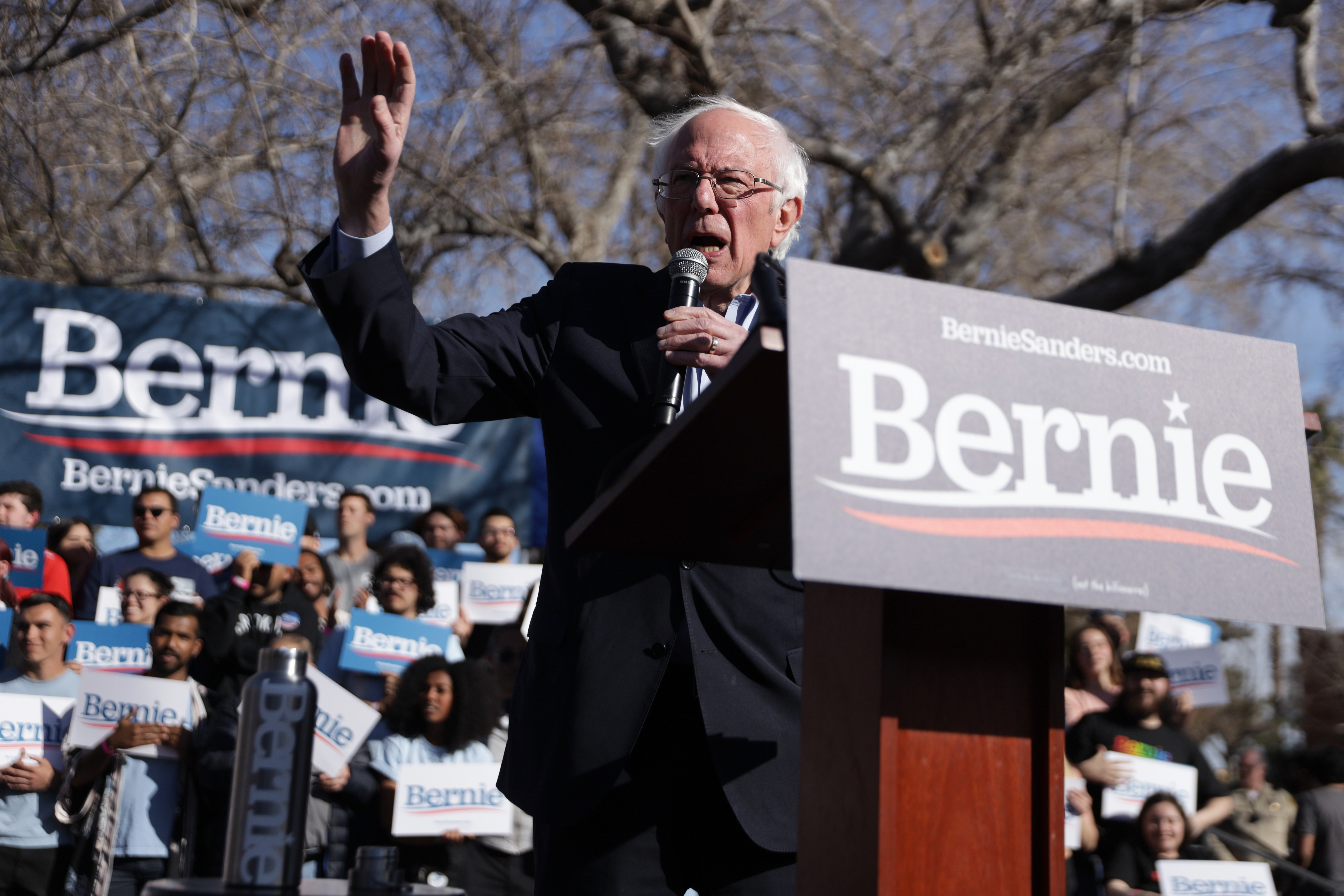 When Sanders comfortably won the New Hampshire primary Feb. 11 after his very narrow Iowa loss, MSNBC anchors decided to gush over Massachusetts Sen. Elizabeth Warren for being a good loser. She came in fourth, and anchors Brian Williams, Rachel Maddow and Nicolle Wallace took viewers to the Warren headquarters to note how nice it was that she was taking pictures even after a disappointing result.

Maddow called the scene “awesome” and Wallace referred to Warren as “a really, really, really good candidate.” Notably absent was commentary about Sanders making a comeback after Iowa. Also absent was anger over the fact that Sanders had a relatively comfortable win with the popular vote, something that caused massive contention with Clinton against President Donald Trump.

After the 2016 election, several media outlets put out headlines reporting the huge margin that Clinton beat Trump by with the popular vote.

“Its official: Clinton swamps Trump in popular vote,” a Dec. 22, 2016 article from CNN is headlined.

Of course, the 2016 presidential election and the Iowa primary are on different scales. But, the difference in how the media reported the news seems stark.

Outlets were quick to point out that Sanders declared victory without the final results – just as Buttigieg did, sans backlash – but the headlines also lacked the outrage and confusion compared to when Clinton won the popular vote during the 2016 election.

Sanders pointed to the popular vote after his Iowa showing, claiming victory because of it. The media, though, didn’t back him up.

While The Washington Post and other outlets published write-ups of the news, it was framed around the Vermont senator claiming victory when there was none. (RELATED: Democrats Are Reportedly Beginning To Think Bernie Sanders Might Be Their Candidate)

It’s debatable whether the confusion of the Iowa primary meant that the media treated the most recently declared results as legitimately finalized, which were after the aforementioned articles were published. The Associated Press, for example, has taken the stance that there was no clear winner. But since then, there has been little, if any, defense of Bernie.

The larger media’s apparent distaste for the new front-runner has shown itself in bits and pieces throughout the fight for the Democratic nomination. The Hill’s Krystal Ball pointed it out after a WaPo op-ed called for less democracy amid the primaries. (RELATED: Media Does Bernie Damage Control After New Hampshire)

“I’ll say this just as clearly and directly as I can,” longtime Democratic strategist James Carville told MSNBC’s Joe Scarborough earlier in February while discussing Sanders. “The only thing, the only thing between the United States and the abyss is the Democratic Party. That’s it. If we go the way of the British Labour Party, if we nominate Jeremy Corbyn, it’s going to be the end of days .. so I’m scared to death.” (RELATED: Bernie Sanders: The Key To Winning In 2020 Will Be Properly Explaining Socialism)

Despite his rush to the front in polling, a Sanders win is still not believable to some. NBC News published an op-ed Feb. 18 titled “Bernie Sanders isn’t the frontrunner in the Democratic race. The moderates are.” The article noted that “the moderate share of the vote beat out Sanders’ and Warren’s” in Iowa and New Hampshire.

“The rush to crown Sanders, the independent senator from Vermont and self-proclaimed democratic socialist, as the heir apparent to the Democratic nomination overlooks a central dynamic,” the article reads. “Sanders is topping the polls as Biden’s support has eroded and the moderate lane has completely fractured. Yet the combined backing for progressive candidates is much lower than it was in the fall — in fact, it now trails the combined support for moderates considerably.”

Sanders’ campaign has been trying to call out the media. Even conservatives have begun to rally around the self-proclaimed Democratic socialist in a fight against the media’s apparent bias.

I see Elizabeth Warren is trying out her own version of Christine Blasey Ford on Bernie Sanders. It’s the Kavanaugh scheme all over again: a surprise hit, the gender card, media collusion, no genuine corroboration. I say disbelieve anything of this sort without hard evidence

“Conservatives understand what it’s like to be ignored by the mainstream media, and then smeared once they decide to pay attention to you,” Saagar Enjeti, former Daily Caller White House correspondent and current host of “Rising” on Hill TV, previously told the Daily Caller. “Unlike those on the left, however, they call it out when they see it on both sides as we saw in CNNs treatment of Bernie Sanders.”

OPINION
1
Legendary Country Musician Tragically Dies From Coronavirus Complications. Here's What We Know
Editorial
2
Joe Biden Accused Of Sexually Assaulting Former Staffer: 'Penetrated Me With His Fingers'
Politics
3
Dr. Anthony Fauci Predicts How Many Will Die From Coronavirus In United States
US
4
Here's Why Californians Are Getting Reamed At The Gas Pump Despite Rock-Bottom Oil Prices
Energy
5
Chuck Todd Asks If Trump Has 'Blood' On His Hands For Coronavirus Reponse -- Biden Says 'That's A Little Too Harsh'
Politics