Drag queen “Cake” read three different books to upward of 30 children at the event. Cake spoke in a deep voice and was dressed in silver high heels, a flowing pink wig, elaborate makeup and a glittery leotard outfit that exposed most of the drag queen’s legs.

“For me, growing up in like my time versus like now, it’s like pretty cool that we’re able to expand everyone’s horizons and show things that kids haven’t seen before,” Cake told the DCNF after the event.

Many of the children were held in their parent’s arms throughout the story hour as they could not yet walk, and the toddlers at the event wobbled around in front of the stage as Cake read to them and led them in song.

The drag queen started with the song “The More We Get Together,” encouraging parents and children to sing along. Cake proceeded to read the book “The Snowy Day” and two other books before leading them in singing “If You’re Happy and You Know It Clap Your Hands.”

The events are designed to be about 45 minutes long for children aged 3 to 8 years old and intended to capture children’s imagination and help children explore their gender fluidity through “glamorous, positive, and unabashedly queer role models,” according to the Drag Queen Story Hour’s official website.

“I think it’s good that people are open. It’s of course optional for anyone that wants to bring their kids to it,” Cake said, adding:

“I think it’s great to see these opportunities popping up.”

Several parents and caregivers who brought children to the event spoke with the DCNF and explained that they view Drag Queen Story Hour as an opportunity to introduce children to diverse ideas.

“It just sounded like a really fun event, different things to do on a Saturday morning,” said local mother Ellen Nassey, who brought her 9-month-old son Elias to the event. “It’s nice to find things that bring the local community together.”

Another local mother who brought her 1-year-old daughter Matilda said she thinks the event is a “such a nice program” and praised its “diversity and inclusivity.”

“This is my second one that I’ve brought her to,” the mother, Marisa Kline, explained. “As she gets older, she pays more attention, loves the stories and so yeah we will keep coming.”

“I think it’s such a great thing that D.C. communities do. It’s one of the reasons we live in this neighborhood, is we like the diversity and the community,” Kline said.

Kline “would fundamentally disagree” with those who say that it is not good for children to attend Drag Queen Story Hours.

“I think giving kids as many perspectives on the world is really important and I think that drag queens in particular teach kids positivity and acceptance,” Kline said. “Those are absolutely values I want to pass on to my daughter.” 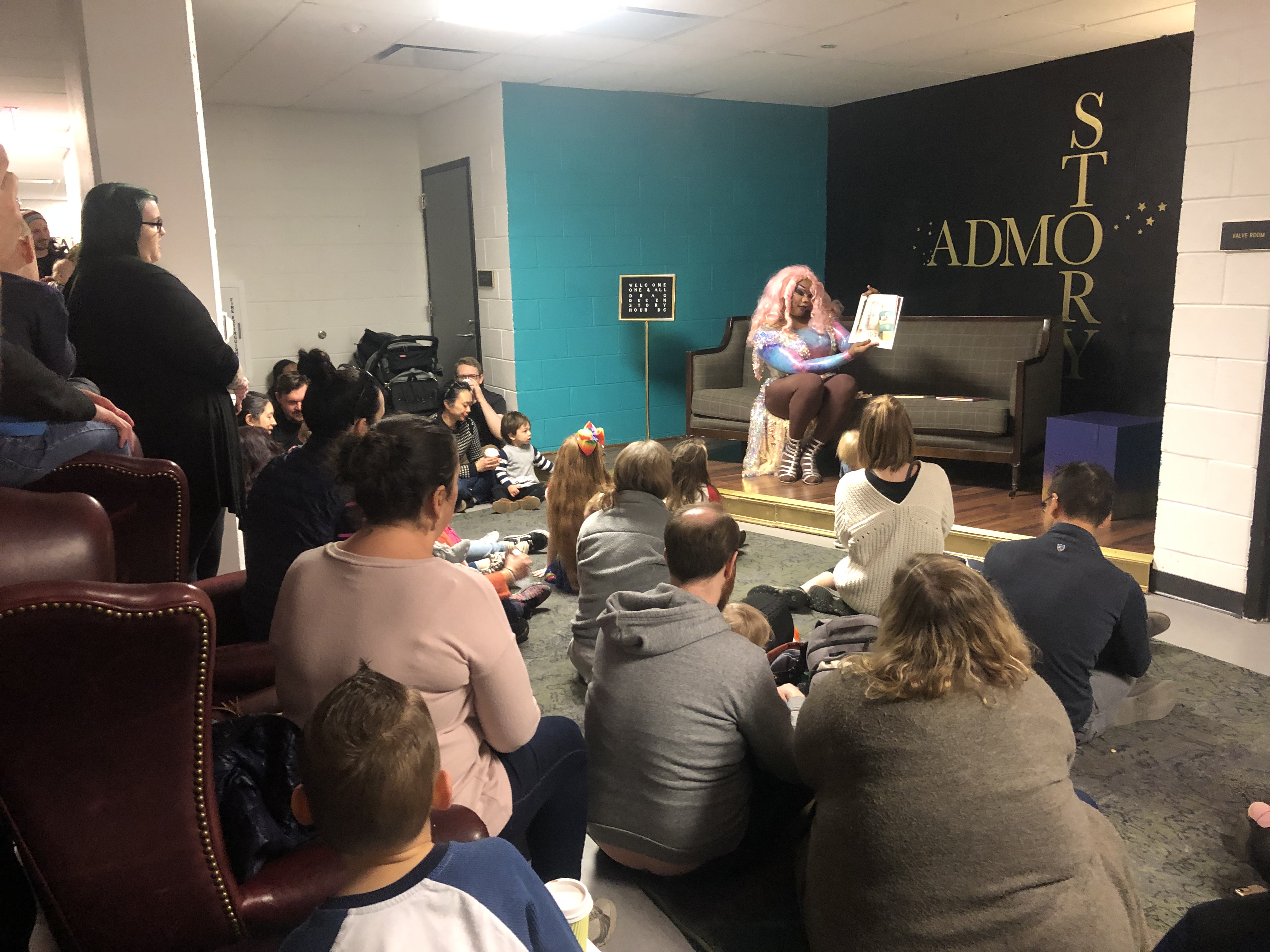 Adams Morgan local Meg Dominguez, who brought her 1-and-a-half-year-old daughter Evangeline to the Drag Queen Story Hour, said she thinks “the more opportunities that kids get exposed to the better.”

“It’s a great opportunity and way to show different diversity and expose kids to different ways of self-expression,” Dominguez said.

A babysitter who brought a child to the event described how the baby was “in big time people watching mode.”

“He was just taking it all in,” babysitter Shane said, adding that the child’s parents were aware that the baby was at the event. “I think it’s a little different because he’s not with his parents so he’s feeling a little bit shy.”

“I love it because I am familiar with drag queens in my personal life on the evening side of things as a part of the nightlife and actually brunch life,” added Shane, who only provided a first name. “I haven’t gotten the opportunity to run into a drag queen on the scene at a library.”

Percell offered families the opportunity to meet Cake and take photos with the drag queen after the story hour ended. Parents waited in line and prompted their children to say hello, sit next to and chit chat with Cake. Some of the children eagerly took photographs with the drag queen, while others hesitated or refused to do so.

One woman observed by the DCNF repeatedly encouraged her daughter to take a picture with Cake. The child clung to her mother’s leg and repeatedly shook her head, refusing to say hello to Cake.

The little girl then began playing with the glittery sequins on the drag queen’s leotard and smiled while the picture was taken.

“Reactions are all over the spectrum,” Cake told the DCNF.

“I think that children, I mean just with anything … they’re kids,” the drag queen said with a laugh. “I’ve gotten like really good reactions, like, ‘Oh, you’re so pretty,’ and I’ve gotten kids crying — just … the spectrum.”

“It totally depends on the child,” Percell said. “The library has different story times where we bring in a performer.”

“Any time there is somebody a little different looking, a kid might react. You know, think of taking pictures with Santa Claus,” the library spokeswoman continued.

The D.C. Drag Queen Story Hour chapter did not respond to the DCNF’s request for comment.