Attorney General William Barr lamented the “massively consolidated” liberal press in the United States which has become “remarkably monolithic in viewpoint” and no longer effective in preventing the “tyranny of the majority.”

Barr’s Wednesday speech at the 2020 National Religious Broadcasters Convention in Nashville, Tennesee focused on “religion, the decentralization of government power, and the free press” as three “bulwarks against this slide toward despotism” in the United States.

“Today in the United States, the corporate – or ‘mainstream’ – press is massively consolidated,” Barr said. “And it has become remarkably monolithic in viewpoint, at the same time that an increasing number of journalists see themselves less as objective reporters of the facts, and more as agents of change. These developments have given the press an unprecedented ability to mobilize a broad segment of the public on a national scale and direct that opinion in a particular direction.”

“When the entire press ‘advances along the same track,’ as Tocqueville put it, the relationship between the press and the energized majority becomes mutually reinforcing,” he continued. “Not only does it become easier for the press to mobilize a majority, but the mobilized majority becomes more powerful and overweening with the press as its ally. This is not a positive cycle, and I think it is fair to say that it puts the press’ role as a breakwater for the tyranny of the majority in jeopardy. The key to restoring the press in that vital role is to cultivate a greater diversity of voices in the media.”

Comparing the liberal democracy envisioned by America’s founders to the “totalitarian democracy” influenced by Rousseau and the French Revolution, Barr contended that the latter’s “path to perfection is to tear down these artifices and restore human society to its natural condition.” 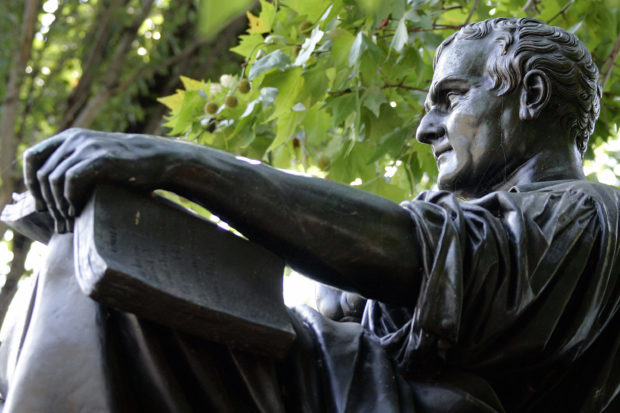 “This form of democracy is messianic in that it postulates a preordained, perfect scheme of things to which men will be inexorably led,” Barr said. “Its goals are earthly and they are urgent. Although totalitarian democracy is democratic in form, it requires an all-knowing elite to guide the masses toward their determined end, and that elite relies on whipping up mass enthusiasm to preserve its power and achieve its goals. Totalitarian democracy is almost always secular and materialistic, and its adherents tend to treat politics as a substitute for religion. Their sacred mission is to use the coercive power of the state to remake man and society according to an abstract ideal of perfection.”

The process towards totalitarian democracy, Barr contended, “would be slow and imperceptible” as “able-bodied citizens” become “more dependent, subject to greater control, and increasingly supportive of dependency.”

The rest of the attorney general’s speech focused on revitalizing not just the free press, but also religion and governmental power. (RELATED: Liberty, Federalism and the STATES Act Bring People Together)

“The Framers would have seen a one-size-fits-all government for hundreds of millions of diverse citizens as being utterly unworkable and a straight road to tyranny,” he said. “That is because they recognized that not every community is exactly the same. What works in Brooklyn might not be a good fit for Birmingham. The federal system allows for this diversity. It also enables people who do not like a certain system to move to a different one. It is easier to run away from a local tyranny than a national one. If people do not like the rule in a state, they can vote with their feet and move. But if it is one size fits all – if every congressional enactment or Supreme Court decision establishes a single rule for every American – then the stakes are very high as to what that rule is.”

WATCH the entire speech below, courtesy of Fox News: