Few companies in the American shooting pantheon have a history as storied as Winchester Repeating Arms Co. From its lever-action roots to its more modern innovations, the company has held a key position in the American imagination for decades, a role which it does not appear will be relinquished anytime soon. The latest in Winchester’s line of gas-piston-operated shotguns, the Super X4 (SX4), assembled in Portugal, and now chambered in 20 gauge, appears to continue this reputation.

Available in a variety of finishes (black, walnut and a wide assortment of camouflage), with either a compact (13″) or a fullsize (14.25″) length of pull (LOP), and three different barrel lengths (24″, 26″ or 28″), the 20-ga. SX4 is a versatile scattergun. The model reviewed here, a 28″-barreled, synthetic-stocked variant with a fullsize LOP, is a sleek-looking example with a single red line accenting the otherwise black receiver just aft of the ejection port.

The SX4 features a self-adjusting gas system that vents excess gases away from the action and through Quadra-Vent ports (l., arrow) in the front of the fore-end. A TruGlo fiber-optic pipe (r.) is positioned at the end of the barrel, atop a serrated 1/4″ rib.
–

Crucial to the operation of the SX4 is its Active Valve gas system, which self-adjusts to allocate the gas pressure necessary to cycle a wide range of loads. When firing the heaviest magnum loads, excess gases vent upward and forward out Quadra-Vent ports in the fore-end. This helps to regulate bolt speed and reduce felt recoil, while simultaneously providing cleaner and more reliable operation. This affects only excess gases, however, as the 20-ga. SX4 can reliably cycle shells as light as 1 1⁄8-oz. 2¾” lead loads.

Though LOP is set from the factory at 14.25″, a series of spacers are included to fine-tune the gun to the shooter if it doesn’t fit from the get-go. The slimline grip is textured to improve purchase, even in the wet conditions that this type of firearm is sure to encounter. We certainly had no complaints with its performance in that department—the gun held solidly in the blind and kept slippage of any sort far out of mind.

Further helping with grip, all controls—the cross-bolt safety, bolt release and bolt handle—are oversized, allowing one to leave gloves on while still easily manipulating the shotgun. Positioning of the controls is fairly standard—the safety sits just behind the trigger, the bolt release is below the ejection port on the right side of the receiver, and the bolt handle is, obviously, incorporated into the bolt. A widely spaced trigger guard similarly allows for the use of gloves.

The trigger is crisp and, though it’s hard to ever call a shotgun trigger “light,” weighs in at a manageable 6 lbs., 7 ozs. There is no take-up at the front end, making it more than adequate to its task. Most intriguing, though, is that the entire trigger group drops out as one enclosed assembly, making cleaning and maintenance easy.

For ease of cleaning and maintenance, the shotgun’s entire trigger group can be removed as one assembly.

–
Moving forward, the utilitarian matte-black aluminum receiver minimizes glare, particularly useful for not spooking ducks or geese rolling in from above, though also a godsend when staring into a rising or setting sun. The magazine is fed via a wide port at the bottom. Though shells slide in easily for the most part, it can be a little sticky getting the fourth and final round to seat in the tubular magazine.

The steel, matte-finished barrel contributes to a balance point that sits further forward, aiding in both swing and follow-through. Even in the relatively cramped confines of a duck blind, the gun hefted easily and tracked well, the 15 ducks it downed in three days standing as testament to its accuracy. The TruGlo fiber-optic front sight—located at the end of a 1/4″-wide rib running the length of the barrel—was easy to acquire, no doubt playing a part as well. 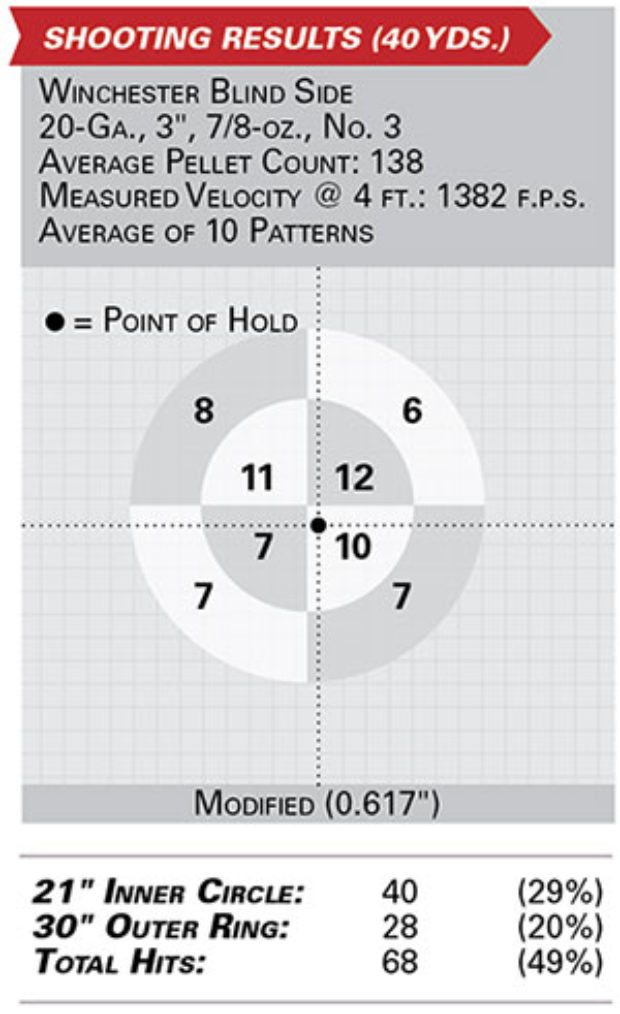 Both the chamber and the rest of the back-bored barrel are chromed, for better resistance to fouling and the elements. A gauge determined the bore diameter of our test sample to be 0.630″. The SX4 ships with three chokes—improved cylinder (0.010″), modified (0.013″) and full (0.028″)—as well as a tool for their removal. The chokes are of the Invector-Plus pattern, with threads at the bottom to better seal out corrosive gases, and additional chokes can be purchased from Winchester. All pattern testing was done with the modified choke installed, as that is how we ran it in the field.

At 40 yds., said patterns displayed a center density that averaged about 1″ high and left, using 3″ Winchester Blind Side loads containing 138 No. 3 pellets, at an average velocity of 1382 f.p.s. measured 4 ft. from the muzzle. The scattergun shot through these long shells with nary a hiccup, cycling well throughout and providing decent recoil mitigation for a firearm of such reasonable weight.

If in the market for a new waterfowling gun that can stand up to the wet rigors of the blind, give the 20-ga. SX4 a look. At $940 it’s not the least expensive of its kind on the market, but, if one does his or her part properly, it is guaranteed to down some birds—while generating considerably less recoil than its 12-ga. older brother.