The World Health Organization (WHO) spends twice as much on travel as it does on medical supplies, according to its most recent financial report.

Eight percent of the WHO’s budget in 2018 went to travel expenses, while just 4% went to medical supplies and materials, the report shows.

“Of total travel expenditure, only 45% was for staff travel, the rest was incurred for non-staff travel, mainly for meeting participants nominated by Member States,” the report states.

WHO’s travel expenditures have faced scrutiny in the past.

The Associated Press reported in 2017 that WHO “routinely has spent about $200 million a year on travel expenses, more than what it doles out to fight some of the biggest problems in public health, including AIDS, tuberculosis and malaria combined.”

The organization has only barely cut its travel spending since then.

Travel expenses dropped by just one percent between 2017 and 2018, according to WHO’s report. 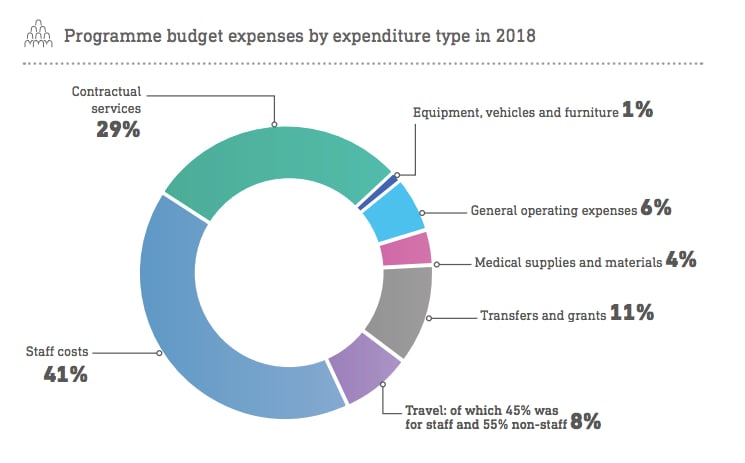 WHO didn’t return an email seeking comment on whether the organization should have spent more on medical supplies, in light of the shortage that many countries are experiencing as a result of the coronavirus crisis.

WHO, the health arm of the United Nations, has come under fire over its cozy relationship with China.

The organization’s leadership has echoed the Chinese government’s talking points on the virus, providing ammunition for the communist regime in its propaganda war.

Republican Florida Sen. Rick Scott on Tuesday called for a congressional investigation into whether the WHO helped China’s communist government cover up the virus in its early stages. (RELATED: Top WHO Official Won Election With China’s Help. Now He’s Running Interference For China On Coronavirus)

The senator also called for congressional hearings on whether the United States should continue funding the WHO. The United States contributes nearly 15% of WHO’s annual budget, far more than any other WHO member.

“They need to be held accountable for their role in promoting misinformation and helping Communist China cover up a global pandemic,” Scott said Tuesday.