Weeks before the 2016 presidential election, the FBI relied on a friend of George Papadopoulos to secretly record the then-Trump campaign aide during a conversation over lunch and a visit to a casino, according to a 171-page transcript of the secretly recorded conversation obtained by the Daily Caller News Foundation.

The transcript shows that Papadopoulos repeatedly denied that the Trump campaign was working with Russia to hack and release emails stolen from the Democratic National Committee and Clinton campaign.

He also dismissed allegations circulating at the time that the Russian government was behind the hacks.

“That’s all bullshit,” Papadopoulos told the source after he brought up the topic of Russia’s possible interests in helping the Trump campaign.

The FBI had for three months before the interaction been investigating whether the Trump campaign was conspiring with the Russian government to influence the election. The bureau opened “Crossfire Hurricane,” the code name for the probe, on July 31, 2016 after receiving a tip from the Australian government related to Papadopoulos.

Papadopoulos is referred to as “Crossfire Typhoon” in the FBI transcript, which was declassified on April 1.

The FBI used multiple undercover sources in the investigation, including at least two who met with Papadopoulos. Stefan Halper, a former Cambridge professor, met with and secretly recorded Papadopoulos and Carter Page, another Trump campaign aide, prior to the election.

Halper approached Papadopoulos on Sept. 2, 2016 to invite the young Trump associate to London under the guise of discussing a research project regarding energy issues. During their visit, Halper tried to pry loose information from Papadopoulos related to Russia. Papadopoulos repeatedly denied involvement in Russia’s hacking efforts.

Halper had worked as a confidential human source (CHS) for the FBI since 2008, according to a Justice Department inspector general’s report of Crossfire Hurricane.

The IG report blasted the FBI for failing to tell the Foreign Intelligence Surveillance Court (FISC) about exculpatory information that both Papadopoulos and Page told the FBI’s informants during their many conversations.

The FBI obtained the first of four wiretap warrants against Page on Oct. 21, 2016.

The IG report said that the FBI “did not inform” the Justice Department’s Office of Intelligence about Papadopoulos’s conversations in three renewals to spy on Page.

“The subsequent FISA renewal applications on Carter Page did not include these statements,” the IG report stated.

The transcript shows that the FBI source repeatedly prodded Papadopoulos for information on the Trump campaign and Russia. During one exchange, Papadopoulos told the source that the Chinese government, Iranian government, or a supporter of Bernie Sanders could have been behind the hack of Democrats’ emails. 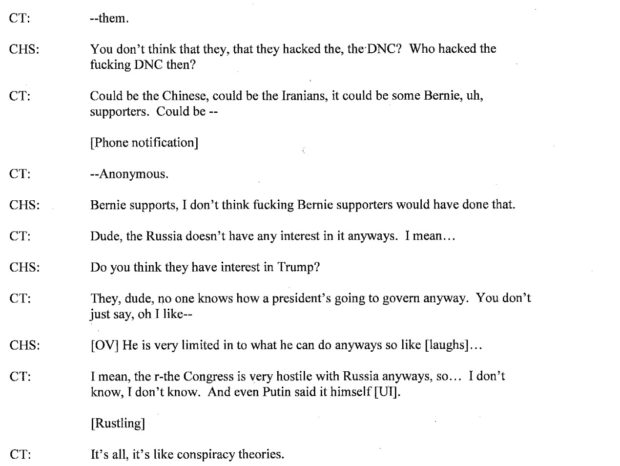 Excerpt of Oct. 31, 2016 transcript of George Papadopoulos’s conversation with an FBI informant

Papadopoulos told the informant that he knew “for a fact” that nobody on the Trump campaign was involved in hacking the DNC.

The IG report says that the FBI tapped the source — referred to as “Source 3” in the report — because of a previous “connection” he had to Papadopoulos. The report said that the man had indicated years earlier during an interview for a separate investigation that he would be willing to work with the FBI.

The transcript indicates that Papadopoulos was good friends with the source, who is not identified by name. Through the course of their interaction, the pair talked about mutual friends and their romantic relationships.

The transcript shows that the source brought up Russia and the Trump campaign multiple times over the course of the spy session.

The transcript begins with the source and Papadopoulos having lunch at a Greek restaurant. Papadopoulos’s comments through the conversation that he was happy to be back home, suggesting that the encounter took place in his hometown of Chicago.

After lunch, which the FBI source paid for, he and Papadopoulos rode together to a casino, where they played blackjack.

In addition to discussing Russia and the Trump campaign, Papadopoulos said that he had worked for Israeli businesses, “to lobby for them in Washington.”

The special counsel’s report of its Trump-Russia investigation revealed that the FBI investigated Papadopoulos as a possible foreign agent of both Israel and Russia.

That report said that investigators found no evidence of a conspiracy between the Trump campaign and Russia. Papadopoulos was also never charged with any crimes related to Israel. He did plead guilty on Oct. 5, 2017 to making false statements to the FBI during an interview on Jan. 27, 2017.

The IG report said the source and Papadopoulos met multiple times between October 2016 and June 2017.

CBS News on Wednesday published a four-page snippet of the transcript, which has redactions for names and other identifying information.

Transcript of Papadopoulos’s Oct. 31, 2016 conversation with FBI informant by Chuck Ross on Scribd

Papadopoulos asserted Wednesday night, after the CBS story was published, that he knew the identity of the source.

“I promise you there is a conspiracy case being built around this frame job. I know exactly who it is,” he wrote on Twitter.

My profanity laced interview with yet another loser informant has been published. I promise you there is a conspiracy case being built around this frame job. I know exactly who it is. https://t.co/xRG72AHxFZ