A lawyer representing the DNC and Clinton campaign provided Christopher Steele with information in 2016 regarding an alleged secret communications channel between the Trump Organization and a Russian bank, the former spy told a British court last month.

That now-debunked tip, from Perkins Coie lawyer Michael Sussmann, set off a chain of events that led to Steele publishing a Sept. 14, 2016 memo accusing the founders of the bank, Alfa Bank, of having “illicit” ties to Vladimir Putin, according to a court transcript obtained by the Daily Caller News Foundation.

A week after Steele wrote that memo, he had another meeting with Sussmann’s colleague, Marc Elias, according to the transcript.

Steele disclosed the previously unreported meetings with Sussmann and Elias during testimony in a defamation lawsuit filed against him by the Alfa Bank founders, the transcript shows.

Steele’s testimony about Sussmann and Elias provides insight into how deeply involved the two lawyers were in the Trump investigation, and suggests they helped shape Steele’s investigation into possible Russian interference in the 2016 election.

Perkins Coie, Sussmann and Elias did not respond to requests for comment for this story.

Steele would go on to produce 17 memos alleging that the Russian government had blackmail material on Trump, and that members of his campaign were conspiring with the Kremlin to influence the 2016 election.

Many of Steele’s most explosive allegations have been debunked in the 40 months since BuzzFeed News published the dossier.

A Justice Department inspector general’s report said that Steele’s primary source of information disputed many of the allegations in the dossier. The IG report also said that the FBI and U.S. intelligence community received evidence in 2017 that Russian intelligence operatives may have fed disinformation to Steele.

The IG report also dealt a fatal blow to the Alfa Bank theory peddled by Sussmann.

It said the FBI investigated whether there were “cyber links” between Alfa Bank and the Trump Organization, the company owned by Donald Trump, “but had concluded by early February 2017 that there were no such links.” 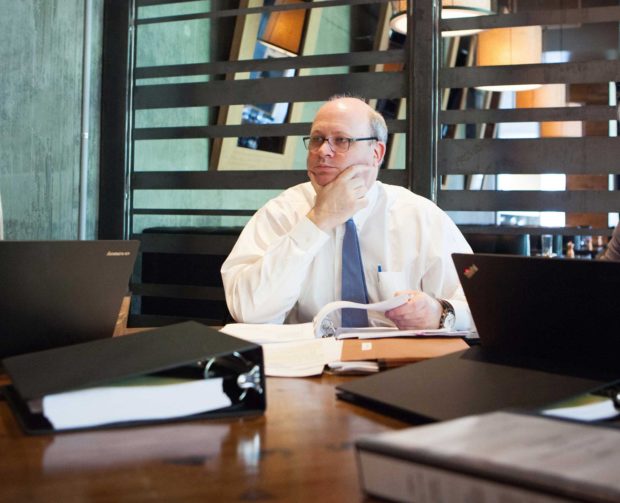 The three owners of Alfa Bank have sued Steele in the U.S. and U.K. over the Sept. 14, 2016 memo, which is referred to as “Company Intelligence Report 112” in the dossier.

Steele testified under oath in London on March 17 and 18.

He revealed that Sussmann, a former Justice Department official, told him during a meeting on July 29, 2016 about suspicious network traffic between the Trump Organization and Alfa Bank, according to the transcript.

He also said that the theory about the computer server traffic was the catalyst for the dossier memo he would write six weeks later about Alfa Bank, the transcript shows. (RELATED: EXCLUSIVE: Dossier Author Testified His Records Were ‘Wiped’)

“I’m very clear is that the first person that ever mentioned the Trump server issue, Alfa server issue, was Mr. Sussman [sic],” Steele told Hugh Tomlinson, a lawyer for the Alfa Bank owners, on March 17, the transcript shows.

Steele went on to say that Fusion GPS founder Glenn Simpson instructed him at some point after the Sussmann meeting to write a report about Alfa Bank, according to the transcript.

“I was given the instruction sometime after that meeting by Mr. Simpson,” said Steele, adding that the instruction from Simpson “was absolutely, definitely linked to the server issue,” the transcript shows.

It was not previously known whether Steele keyed in on Alfa Bank on his own initiative, or if someone else tasked him with investigating the bank.

Steele said that he directed his dossier source to collect information from Russia about the bank, the transcript shows.

The transcript also shows that Steele claimed that the source, who has not been identified, met with a “top level Russian government official,” who reported back on the Alfa Bank founders.

The report also alleges that both sides held compromising information on the other, keeping everyone involved in check.

Sussmann shopped the allegations about the Alfa Bank computer servers around to others besides Steele, including to journalists and the FBI’s top lawyer.

He shared the information with reporters from the New York Times and Slate, which ran a story on Oct. 31, 2016.

According to that story, Alfa Bank’s servers were communicating in a peculiar fashion with those of the Trump Organization. A team of computer experts who studied the traffic determined that the Alfa-Trump channel was being used for some sort of communication between the two sides, the story said.

That assessment, if true, would have fit into Steele’s theory that the Trump campaign was conspiring with the Kremlin.

The Slate story appeared as rumors gained steam that the Trump campaign was somehow involved in the hack and release of emails from the DNC and Clinton campaign. On Sept. 23, 2016, Yahoo! News published a story alleging that Trump campaign aide Carter Page met secretly with Kremlin insiders to discuss exchanging material on Hillary Clinton.

On the day the Slate story appeared, Mother Jones reporter David Corn published a report citing a “former Western intelligence officer” who claimed that the Russian government had compromising material on Trump.

It is now known that Steele was involved in one way or the other in all three of the stories. He has acknowledged in court proceedings to meeting with both reporters from Mother Jones and Yahoo, and had investigated the allegations central to the Slate story.

To further spread the Alfa Bank story, Sussmann contacted James Baker, his former DOJ colleague who then served as general counsel for the FBI. Baker told House investigators on Oct. 18, 2018 that Sussmann contacted him to share the information and that they met on Sept. 19, 2016.

That day was a busy one for the FBI’s Crossfire Hurricane team. The Justice Department IG report said that Steele provided six memos from his dossier to the FBI that same day.

The FBI began almost immediately drafting an application for a Foreign Intelligence Surveillance Act (FISA) warrant against Carter Page. The applications relied heavily on Steele’s dossier, which alleged that Page was a key link between the Trump team and Kremlin.

Notably, Steele did not provide the FBI with Report 112 from his dossier, according to the IG report. The FBI eventually obtained the memo on Nov. 6, 2016, when provided it to Baker.

It is unclear whether Sussmann and Steele’s outreach to the FBI on Sept. 19, 2016 was coordinated, or merely coincidental.

Three days later, Steele met with Elias at Perkins Coie’s offices in Washington, D.C., the ex-spy testified. Steele did not provide details of his discussions with Elias.

He also met with several journalists to discuss the dossier during that same visit to the U.S. capital. One of the journalists Steele met was Michael Isikoff, the author of the Yahoo! story about Carter Page.

Perkins Coie has been reluctant to discuss its affiliation with Fusion GPS and Steele. Elias, the Perkins Coie partner, did not disclose his involvement in the matter when he attended a congressional deposition regarding the dossier along with his client, former Clinton campaign chairman John Podesta.

New York Times reporter Ken Vogel has said that Elias misled him in 2017 when asked if Perkins Coie funded the dossier.

One mystery is where Sussmann obtained the information regarding an Alfa Bank connection to the Trump Organization. Steele testified that a group of cyber experts passed Sussmann the information in late July 2016.

The cyber experts, who go by the pseudonyms “Max” and “Tea Leaves,” have spoken to numerous reporters about their investigation, including at Slate, The New Yorker and The New York Times.

A cyber firm that Alfa Bank hired to investigate the server allegations determined that the computer records were likely fabricated by “threat actors” who wanted “to make it appear as though a connection existed” between the Trump Organization and Alfa Bank.

“If true, this would constitute a potential violation of various US federal laws,” Ankura, the cyber firm, wrote in a report released Friday.