The FBI is refusing to release documents related to the primary source for dossier author Christopher Steele, saying in response to a public records request that the information is classified and risks identifying a confidential FBI source.

The source, whose identity remains a mystery, holds key information that could shed light on apparent inaccuracies in Steele’s dossier, which the FBI cited extensively in applications for surveillance orders against Trump campaign aide Carter Page.

The decision, which the FBI made in response to a Freedom of Information Act request filed by The Daily Caller News Foundation, comes as Republican lawmakers have increasingly accused the FBI and its director, Christopher Wray, of withholding documents relevant to the investigation into possible collusion between the Trump campaign and Russian government.

The DCNF sought all FBI records for an individual identified as “Primary Sub-Source” in a Justice Department inspector general’s report released on Dec. 9.

According to the IG report, the source undercut key allegations that Steele made in his dossier, which the FBI used to obtain four Foreign Intelligence Surveillance Act (FISA) warrants against Carter Page. (RELATED: Primary Dossier Source Remains Elusive Months After Release Of Scathing IG Report)

The FBI tracked down the source and interviewed him for the first time in January 2017. The source provided information directly to Steele that he collected from a network of sub-sources.

The IG report says the source said that Steele misrepresented information that ended up in the dossier. The source said he shared “rumor and speculation” with Steele, but the retired spy presented it as fact.

The source’s statements to the FBI “raised significant questions about the reliability of the Steele reporting,” the IG report said.

Michael Horowitz, the inspector general, blasted the FBI for failing to disclose the bombshell information in its final two FISA applications against Page.

The Justice Department deemed the two FISA orders to be invalid because of the FBI’s omission of information about Steele’s source.

The IG report said that an FBI case agent who has been identified in the media as Stephen Somma took part in the interview with the source. David Laufman, who served at the time as the Justice Department’s chief of counterintelligence and export control, arranged and attended the interview. The report faults Somma for being “primarily responsible for some of the most significant errors and omissions” in the FISA applications. 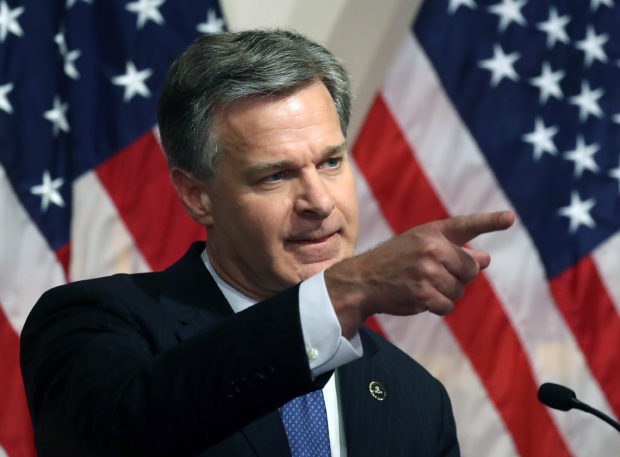 FBI Director is Christopher A. Wray speaks to the media during a news conference at FBI Headquarters, on June 14, 2018 in Washington, DC. (Photo by Mark Wilson/Getty Images)

Steele, who investigated the Trump campaign on behalf of the Clinton campaign and DNC, said in a court deposition in London in March that the source had worked with his firm, Orbis Business Intelligence, for several years. Steele said he paid the source a retainer of up to $5,000 per month.

In its letter to the DCNF, the FBI cited three exemptions under FOIA to deny releasing the documents about the source. The bureau also indicated for the first time that it considers the Steele source to be a confidential source for the FBI.

“The nature of your request implicates records the FBI compiles pursuant to its national security and foreign intelligence functions,” Michael G. Seidel, the acting section chief for the FBI’s information management division.

Seidel also rejected the request, saying that the information would reveal the “identity of confidential sources and any information furnished by such sources in criminal law enforcement and national security investigations.”

“Disclosing source related records about an individual or entity could reasonably be expected to undermine the use of confidential sources as it would discourage cooperation with the FBI in the future.”

“Therefore, your request is closed.”

It is unclear if the FBI considers the Steele source to be a CHS.

While little is known about Steele’s source, the former spy reportedly told his business partners at the firm Fusion GPS that the source was “well known to U.S. intelligence and law enforcement officials.”

Republicans digging into the origins of the FBI’s investigation of the Trump campaign have recently accused Wray of being too slow in releasing documents about the probe.

Ohio Rep. Jim Jordan, the top Republican on the House Judiciary Committee, has led the charge in accusing Wray of obstinance in producing the documents.

Wray addressed some of those concerns in an interview Wednesday with Fox News anchor Bret Baier.

“I think we’ve tried very, very hard to be transparent and cooperative with all the relevant congressional committees. We’ve produced all sort of information to try to really lean forward,” Wray said.

Congress typically has greater leverage than the media in obtaining documents from federal agencies.

Some lawmakers have indicated that they want information related to the dossier source.

Graham is seeking all documents and communications related to the FBI’s interviews with the source, including FBI reports written about the individual.

Steele revealed in court testimony in March that he no longer has documents related to the source. He said his computers were “wiped” in December 2016 and January 2017.

The FBI did not respond to a request for comment for this story.