Federal law enforcement officers have arrested the “ringleader” behind the attempted takedown of President Andrew Jackson’s statue in Lafayette Park late in June, according to a report from Fox News.

The Federal Bureau of Investigations, in conjunction with the U.S. Park Police, arrested Jason Charter on Thursday morning and charged him with the destruction of federal property, according to Fox News.

Unnamed law enforcement sources tell Fox he was responsible for the June 22 attack on Jackson’s statue in front of the White House and the June 19 destruction of the Albert Pike statue. (RELATED: Antifa Group Plans To March Alongside Pro-Gun Protesters In Virginia)

“They were very organized,” a federal law enforcement official told Fox News. “Charter was on top of the statue and directing people … they had acid, chisels, straps and a human chain preventing police from getting to the statue.”

According to Fox News, a criminal complaint against Charter states he is “plainly visible in footage from the destruction of both the Pike Statue and the Jackson Statue, carrying the same Swiss Gear logo backpack, bicycle helmet, walking cane, and armband.”

“At the Jackson Statue incident, Charter is additionally seen wearing a red set of ski goggles and a yellow ventilator mask. Charter’s face is clearly visible at different times during each incident,” the FBI states in a filing, according to Fox. 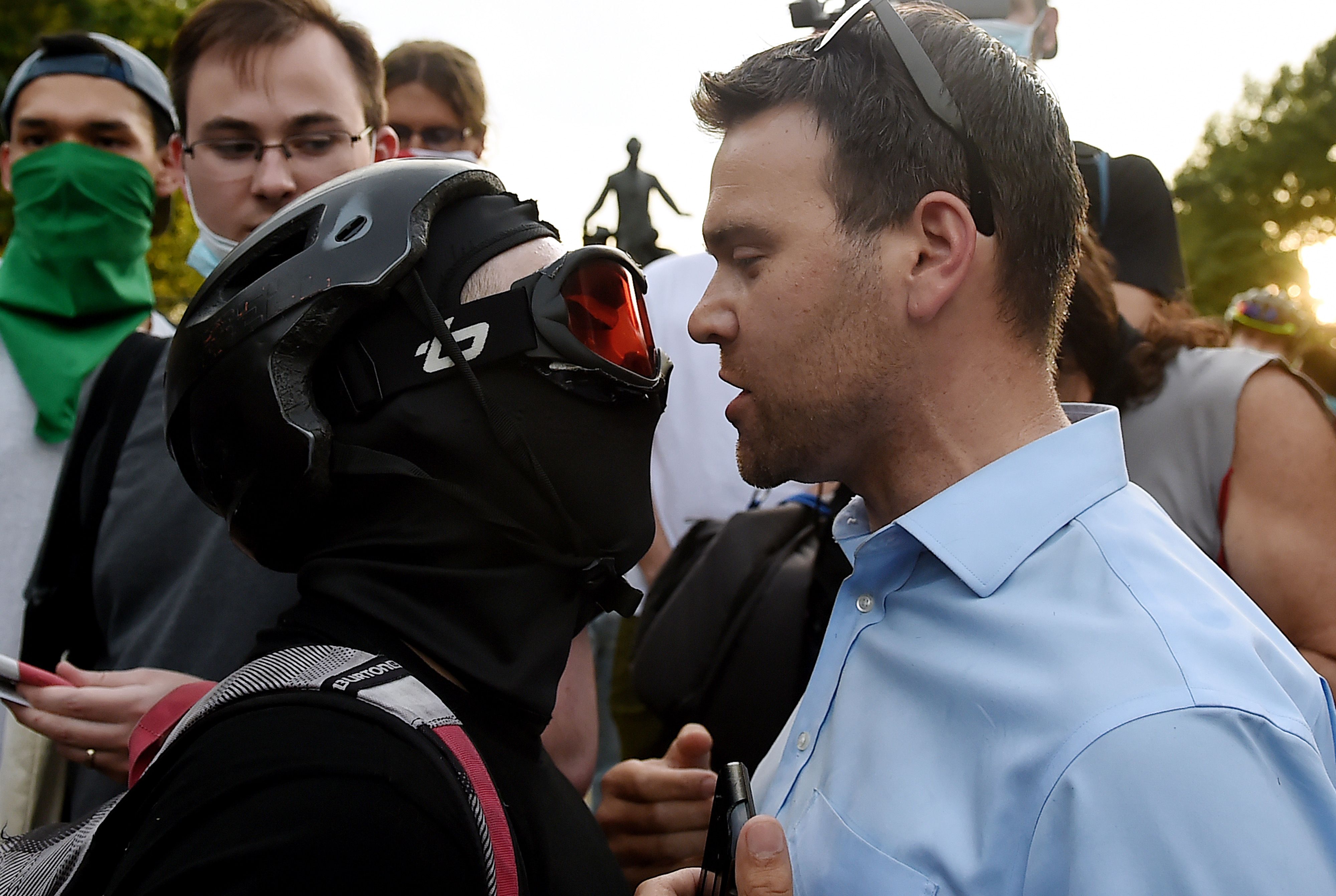 Conservative activist and Trump supporter Jack Posobiec (R) gets into an argument with anti-racism protesters in front of the Emancipation Memorial at Lincoln Park in Washington, DC on June 26, 2020. – US President Donald Trump today signed an executive order pledging to enforce prosecution for protesters who vandalize public memorials, as he announced he was skipping a weekend at his New Jersey golf resort to ensure “LAW & ORDER” in Washington. (Photo by OLIVIER DOULIERY/AFP via Getty Images)

Charter was identified on Twitter as the masked protester who confronted One America News host Jack Posobiec at the recent Lincoln Park protests.

ANTIFA gets in the face of @DailyCaller ‘s @VincentShkreli. Vince was filming infront of the #emancipationstatue and then ANTIFA tried to intimidate him out of the park. pic.twitter.com/LUaAFwemNA

Fox News reports that Charter is expected to appear virtually on Thursday before a U.S. District Court in Washington, D.C.

The Caller has reached out to the FBI for comment, and will update the article if we receive a response.