In this Steyr Pro THB review, see why the new tactical Steyr rifles are giving competitors a run for their money. This test looks at a new model set in a McMillan stock.

In a crowded field of factory sub-$2,000 long-range rifles that can pound tiny groups, Steyr rifles seem — at least in the U.S. — to be an afterthought. Given Steyr’s long history of producing military rifles and the adoption by several militaries and special forces groups of the Steyr SSG-08 sniper rifle, coupled with some of the most accurate cold hammer-forged barrels made anywhere, that lack of popularity is baffling, to say the least.

The new Steyr Pro THB (Tactical Heavy Barrel) variants could change perceptions in the long-range shooting world. The THB lineup deserves a place among other affordable precision rifles such as the Tikka T3x, Bergara B-14 HMR, Howa KRG Bravo, and Ruger Precision Rifle, among others.

Now Steyr has debuted two new variants of the THB that should appeal to the U.S. market — a 6.5 Creedmoor version with a camo Manners stock, and a .308 Win. version with a black McMillan stock. I tested the McMillan version.

A black McMillan fiberglass stock specially designed for the new line of Steyr rifles, provides adjustability and gives it a hefty, custom feel. The McMillan stock looks like the company’s long-favored A5, only with — how can I put this? — German styling. An adjustable cheek riser and spacers for varying lengths of pull are standard. It has quick-detach cups to use modern slings and the forend is a wide benchrest type. 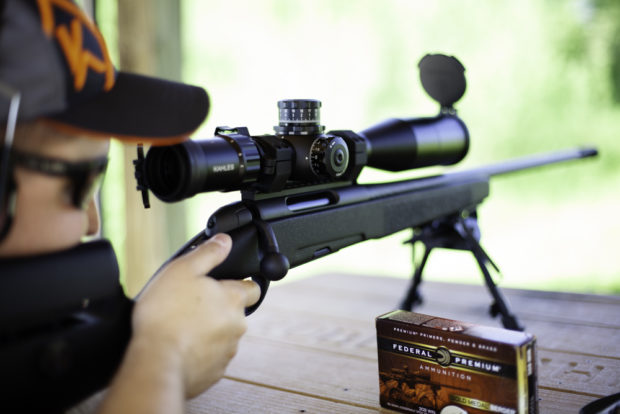 Everything about the Steyr Pro THB rifle, from its cold hammer-forged barrel to its match-grade trigger, lived up to the reputation of Steyr for building best-class rifles.

The SBS action (Safe Bolt System) uses a smartly designed 2+1 safety with three settings that are thumb-operated by a wheel switch on the tang of the stock. Fire is indicated by a red dot, while level one Safe disables the firing mechanism; level two Safe locks the bolt down completely. But none of this overengineering hindered the delicateness of the single-stage trigger. It is match-grade smooth and measured on my Lyman trigger-pull gauge at just a tad over 2 pounds.

The bolt used on these Steyr rifles is a little marvel of German engineering: It sports four lugs, double deep, with a plunger-style ejector. Steyr even thought to cut channels into the bolt body, which are designed to direct gas away from the shooter in the event of a case rupture or other catastrophic failure. The Germans aren’t playing games when it comes to safety.

For years shooters have recognized the smoothness of the Tikka (Sako) bolt-action, but I have to say that Steyr rifles are right up there in terms of glass-smoothness. It seemed no matter how fast or hard I jacked the bolt on the THB I couldn’t get the thing to hiccup. It sliced cases off of the 5-round magazine like warm butter and slid them into place as if on greased rails.

The McMillan THB uses the same 5-round, double-stack polymer magazines of the entire THB series. These snap into place in the stock with dual spring-loaded catches on either side of the mag (a full grip of the mag is needed to release it). There is also a second stage, where you can leave the mag in a semi-seated position. This allows you to close the bolt without chambering a round.

The thing about the mag that really left me feeling euphoric was its extra length. That provides plenty of room for handloaders to seat bullets out as far as possible to tweak accuracy, while not affecting feeding.

A short Pic rail under the forend comes standard for attachment of Atlas-style bipods, but I replaced it with a sling swivel button and mounted the new Harris Model SBR2 bipod. The SBR2 sports spring-loaded legs and knurled knobs with which to lock each leg at different heights — making it easy to keep your rifle level on sloped terrain. Look for the new Harris SBR2 (and Model 1ASBR2) to be a versatile tool for the “practical sniper rifle” or PRS match shooter. 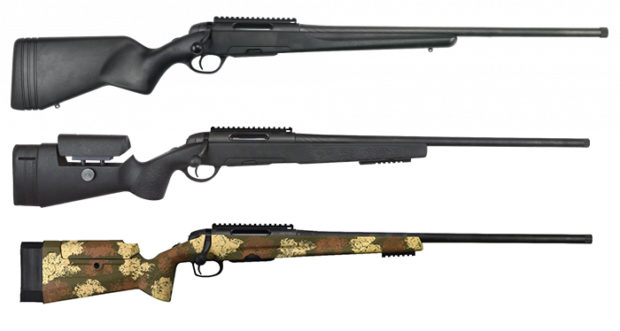 The standard Steyr Pro THB (top) has a utilitarian black polymer stock that should appeal to police agencies and long-range shooters seeking a budget sniper rifle. The black McMillan stock upgrade (middle) is available in the .308 Win. chambering and gives you a beefier, stiffer fiberglass option with adjustable length of pull and cheek riser height — plus built-in quick-detach sling swivel cups. The Manners camo stock (bottom) is available in 6.5 Creedmoor.

Of course, to upgrade the bipod I added a KMW Pod-Loc to replace the tiny knurled tension knob that comes on the Harris. The Pod-Loc makes lightning-fast bipod adjustments a snap and can be located without taking your eyes from the scope. It’s a must-have for your long-range shooting kit.

The test rifle sported a long 26-inch barrel, which was threaded 5/8×24 right-hand for a muzzle brake or suppressor. I added a .30-cal. Terminator TT muzzle brake, which slashed recoil on the .308 rifle down into .223 Rem. territory. That’s no joke. I’ve never had an issue with the .308 Winchester’s recoil, but nothing promotes accuracy like less kick. The Terminator TT brake is user-timed: simply screw it on and secure the lock nut with a crescent wrench.

Barrel and receiver metal are finished in Steyr’s Mannox finish, which might be described as a “smooth matte” bluing. Of course, the barrel has Steyr’s distinctive cold hammer-forged twist. And boy did this rifle shoot, easily meeting and exceeding Steyr’s 1 MOA out-of-the-box accuracy guarantee.

With the Steyr Pro THB Scharfschützengewehr being touted as a sub-MOA rifle, I focused on securing a best-in-class riflescope and contacted Kahles, of Austria. Kahles has long been among the leaders in the Precision Rifle Series (PRS) and similar matches and has equipped countless long-range shooters and professional snipers for decades. For years I’ve used a Kahles hunting scope and the glass quality in that optic always impressed me. However, the Kahles 525i 5-25x56i tactical riflescope is in an entirely different class. 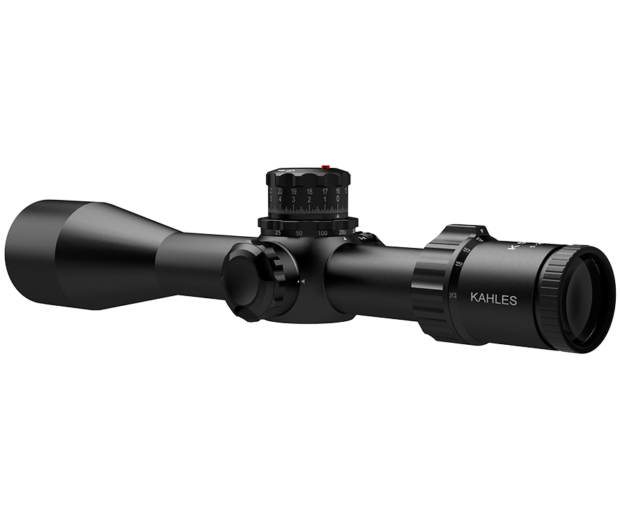 The Kahles 525i 5-25x56i first focal plane riflescope gives you stunning resolution, spot-on tracking and every tactical advantage you would expect from tier-one Austrian glass. Parallax adjustment was easy thanks to the large knob below the elevation turret. Clicks were solid and the illuminated reticle was simple to activate using the left-side knob. Windage was on the right, a configuration you can order reversed. A cavernous 34mm tube sucks in light and provides a spectacular level of detail on distant targets.

Its glass provides astounding resolution at all magnification levels, so much so that I could spot hits — as in, actually see the holes — on a cardboard IDPA target at nearly 600 yards. With that kind of sharpness, you can count a whitetail’s whiskers and watch your bullet’s vapor trail as it slices air.

The Kahles 525i I tested used the excellent MSR, or Multipurpose Sniper Reticle, and had the windage turrets on the right, illumination on the left (you can order this reversed). Parallax adjustment is via the big horizontal wheel, which is coaxial to the elevation turret, a distinctive and very smart design feature by Kahles. The scope’s .1 Mil clicks were solid and tracked like a laser. The scope was secured to the Steyr THB rifle’s Picatinny rail with 34mm rings from Seekins Precision, which were spot on and required no scope ring lapping. 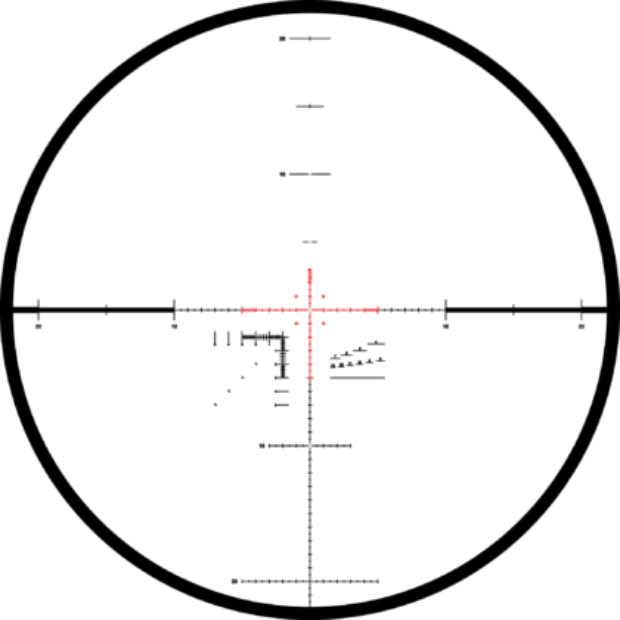 The MSR reticle, or Multipurpose Sniper Reticle, was developed by FinnAccuracy and is licensed only to Kahles, Steiner and Schmidt & Bender. It’s based on the milliradian system and gives you three ranging options: a main reticle, a fine milling scale and a rapid-ranging scale. Visit finnaccuracy.com for a detailed explanation of the reticle’s rich feature set.

As is customary with my precision rifle builds, I added a 34mm bubble level from Accuracy 1st International. It’s a small piece of gear that yields big results downrange and is essential to making long-range hits. It doesn’t matter how accurate your rifle is if you’re shooting off-level at distance.

How Accurate Are Steyr Rifles?

For range testing the THB I relied on my confidence loads from Federal — the 168- and 175-grain Gold Medal Match, and the 185-grain Berger Juggernaut.

Using the Redding National Match Die Set (NM-C), I loaded up some rounds using Federal’s new .308 brass, the 175-grain Federal TLR Edge bullet and 47-48.7 grains (max) load of the new Alliant Power Pro 2000-MR powder. The data on that reload caught my attention because Federal is touting 2,800 fps velocity with a 175-grain bullet. In the .308 world that’s a game-changer.

I expected the Steyr Pro THB and Kahles 525i combination to shoot the eyebrows off a gnat. That’s what it did. The rifle printed small groups with all three Federal factory loads, including the heavy 185-grain Berger missile. All groups averaged better than 1 MOA at 100 yards, with the best loads from the 168-, 175- and 185-grainers printing at .48, .38 and .36 inch, respectively … all under ½ MOA.

Whether lying in prone, seated at the bench or standing for off-hand shots, the McMillan stock was comfortable and as stable as an Oak. During one evening shoot, the rifle printed a 1.91-inch 3-shot group on an IDPA target. That might not sound like impressive accuracy, until you pace off the distance: At 567 yards — that’s .37 MOA. A mere chip shot for the Steyr Pro THB.

The article originally appeared in the December 2019 issue of Gun Digest the Magazine.

For more information on the Kahles 525i 5-25x56i, please visit www.kahles.at.