President Donald Trump’s June 20 rally in Tulsa, Oklahoma did not lead to the subsequent spike in COVID-19 cases many were predicting, according to one study.

Although several thousand Trump supporters attended the rally at the indoor Bank of Oklahoma arena in Tulsa last month, attendance was well short of filling the 19,000 seat facility. Most of the attendees, however, were packed together and many did not appear to wearing masks, leading many to predict a spike in COVID-19 cases arising from the event. 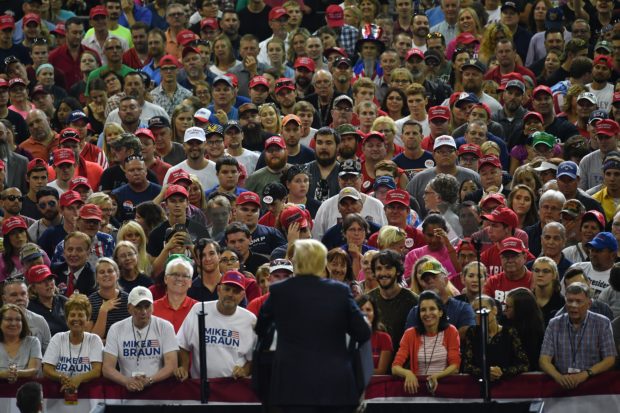 US President Donald Trump speaks during a campaign rally at Ford Center in Evansville, Indiana on August 30, 2018. (Photo by MANDEL NGAN / AFP via Getty Images)

The study, conducted by the National Bureau of Economic Research, analyzed Centers for Disease Control and Prevention (CDC) data on coronavirus cases and a synthetic control design, finding “no evidence that COVID-19 case growth grew more rapidly in Tulsa County, its border counties, or in the state of Oklahoma than each’s estimated counterfactual in the weeks following the campaign rally.”

The study claimed to be “the first to explore the impact of this event on the spread of COVID-19.”

“Difference-in-differences estimates also provide no evidence that short-run COVID-19 case rates grew faster in counties that drew relatively larger shares of residents to the event,” the summary read. “We conclude that offsetting behavioral responses to the rally — including voluntary closures of restaurants and bars in downtown Tulsa, increases in stay-at-home behavior and displacement of usual activities of weekend inflows, and smaller-than-expected crowd attendance — may be important mechanisms.”

The National Bureau of Economic Research study comes after Dr. Bruce Dart, director of Tulsa’s public health department, suggested last week that 500 new cases could have at least partially been caused by the event. (RELATED: Adm. Brett Giroir: Dr. Fauci ‘Not 100% Right,’ Doesn’t ‘Have The Whole National Interest In Mind’)

“The past two days we’ve had almost 500 cases, and we know we had several large events a little over two weeks ago, which is about right,” Dart told reporters last Wednesday, claiming that the gatherings “more than likely contributed to that.”