Two members of a House subcommittee, including its Democratic vice chair, own stocks in one or more of the pharmaceutical companies set to testify before the subcommittee on Tuesday about the development of coronavirus vaccines.

Massachusetts Democratic Rep. Joe Kennedy III, the vice chair of the House Energy and Commerce Oversight and Investigations Subcommittee, reported in his latest available financial disclosure that he owned up to $1.7 million in stocks of Merck, Johnson & Johnson and Pfizer, three of the five vaccine manufacturers scheduled to testify before his committee on Tuesday.

A Republican member of the subcommittee, Texas Rep. Michael Burgess, also reported in his latest financial disclosure owning between $1,000 and $15,000 of stock in Pfizer and Merck.

Stat News first reported Kennedy and Burgess’s ownership of stocks in the pharmaceutical companies that they will be questioning in Tuesday’s hearing.

Members of Congress can legally own shares in companies, but Kennedy and Burgess’s ownership in the vaccine manufacturers does create the image of a potential conflict of interest, Washington University in St. Louis government ethics professor Kathleen Clark told Stat News.

“What this hearing raises is the ongoing problem that we can’t tell whether members of Congress are taking action out of their view of what is in the public interest, or whether they’re taking action in order to line their pockets,” Clark told the outlet, noting that if one of the companies is granted government approval for a coronavirus vaccine it could prove to be a windfall for its shareholders. 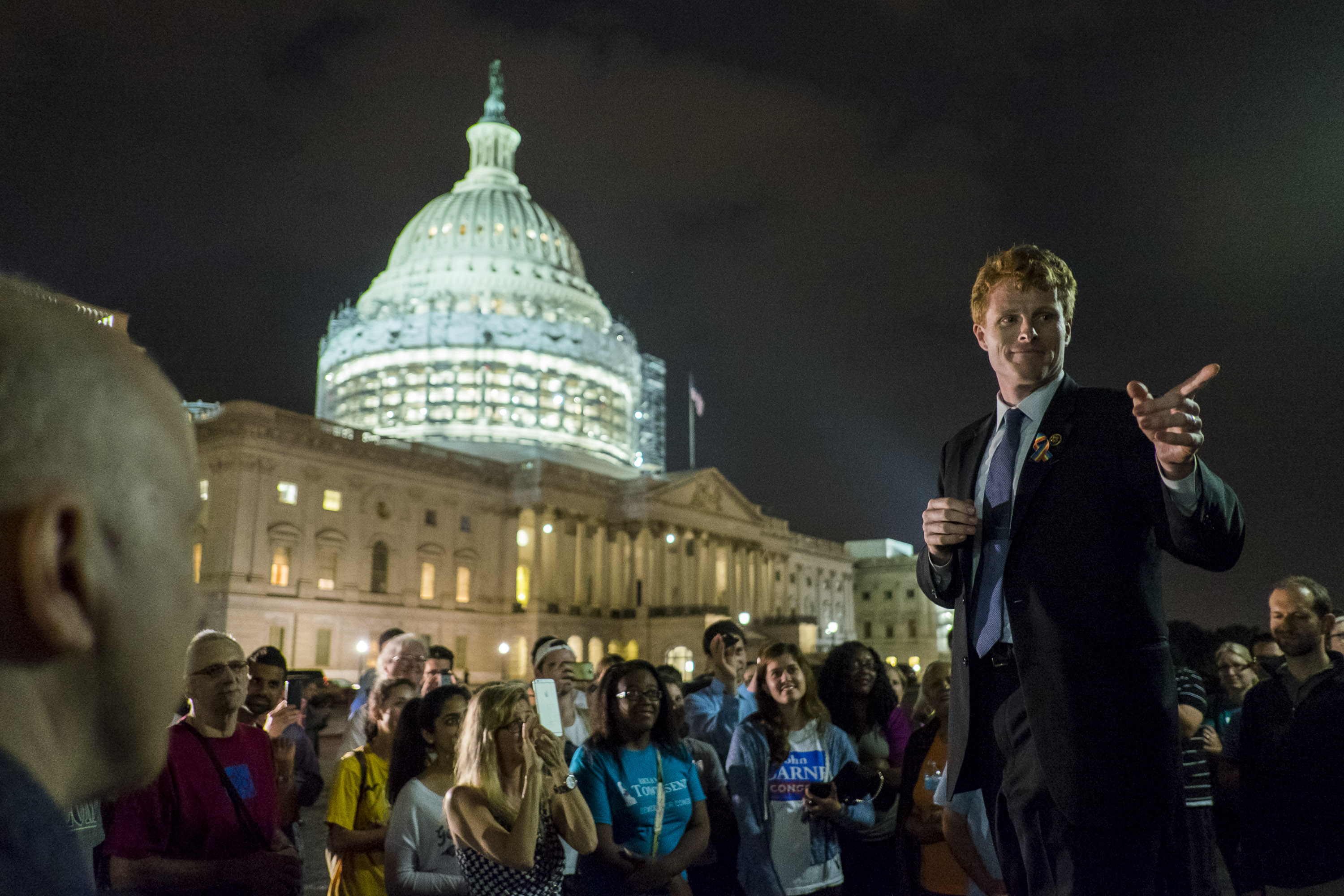 Rep. Joe Kennedy III (D-MA) speaks to supporters of House Democrats taking part in a sit-in on the House Chamber outside the U.S. Capitol on June 23, 2016 in Washington, DC. (Pete Marovich/Getty Images)

Stat News also reported that West Virginia Republican Rep. David McKinley owned between $5,000 to $15,000 in Pfizer stock, but a spokesman for McKinley’s office said that his 2018 financial disclosure showed that he had sold his Pfizer stock in December 2018 and would be seeking an update from the outlet.

It’s unclear exactly how much stock Kennedy owns in the vaccine manufacturers. He reported in his 2019 financial disclosure owning between $500,000 and $1 million in Merck stock, between $300,000 and $600,000 of Johnson & Johnson stock, and between $16,000 and $75,000 of stock in Pfizer. A spokesman for Kennedy told Stat News that the shares are held in a family trust that Kennedy has no control over.

Kennedy, who is challenging Sen. Ed Markey in the Massachusetts Senate Democratic primary, has previously divested from politically inconvenient investments. His family trusts divested from hundreds of thousands of dollars of stocks in fossil fuel companies in May after he was questioned on the campaign trail about whether his ownership in the industry ran counter to his pledge to fight climate change.

Kennedy’s office did not return a request for comment by the DCNF asking if Kennedy had any intentions of divesting from his positions in the pharmaceutical companies.

Following the publication of this article, Burgess spokeswoman Sarah-Anne Voyles told the DCNF: “These trades are disclosed routinely and publicly in reports to the House of Representatives Ethics Committee, in full compliance with transparency laws. The accounts in question were purchased prior to Congressman Burgess coming to Congress. He does not do any direct trading or advisement with any of his financial investment accounts. Further the Pfizer stock belongs to Congressman Burgess’ wife, who does not interact with his official or political offices.”