Neil Bush, a relative of two former presidents, is the co-chairman of a Beijing-based real estate firm that partnered last year with China’s main producer of space and military equipment, which the Pentagon recently deemed an arm of China’s military.

Bush and Wang Tianyi, his co-chairman at the real estate developer CIIC, organized a symposium in November that hosted Chinese and Russian space officials as well as managers from the China Aerospace Science and Technology Corporation (CASC), which produces China’s space equipment and much of its military arsenal.

CIIC signed a “strategic cooperation framework agreement” with CASC in May 2019 that included hosting the symposium, according to a brochure of the event.

While there is no indication that Bush has done anything improper, his work with CIIC and CASC comes amid increased scrutiny in the U.S. of China’s geopolitical endeavors.

Bush, who is a shareholder in CIIC, has drawn attention in the past over his business dealings in China.

In 2002, while his brother was in office, Bush signed a $400,000-per-year contract to advise China’s Grace Semiconductor Manufacturing Co., the Los Angeles Times  reported. In 2009, he represented the China Petroleum & Chemical Corp., known as Sinopec, in a deal to buy a stake in an oil field in Ghana, according to The Wall Street Journal.

U.S. government officials and space analysts have expressed growing concerns about China’s space endeavors, as well as increased collaboration between Beijing and Moscow on their space programs.

The Defense Intelligence Agency warned in a report in January 2019 that “Chinese and Russian military doctrines indicate that they view space as important to modern warfare and view counterspace capabilities as a means to reduce U.S. and allied military effectiveness.”

The report said that China and Russia “have taken steps to challenge the United States” by coordinating their space programs.

The Defense Department on June 24 designated CASC and 19 other Chinese companies as military-controlled organizations because of their ties to the People’s Liberation Army.

Several Russian government officials were invited to the November event, and at least one spoke at the seminar, according to an agenda for the event.

“As it stands, China is maybe on average 5-7 years behind the U.S. in space — and they are gaining in the strategic high ground of space,” Weichert told the Daily Caller News Foundation. “Should the U.S. not respond adequately, then the Chinese will rule the cosmos and whoever rules space rules the Earth below.”

CIIC’s space goals are not entirely clear. Speeches from Bush and Tianyi posted on CIIC’s website show that they advocate for using space exploration to develop technologies for the health care sector. The company’s interest in space appears to have started in late 2017 with the group hosting its first symposium in 2018, according to CIIC’s website. (RELATED: William Barr Warns US Executives Against Acting As Foreign Agents) 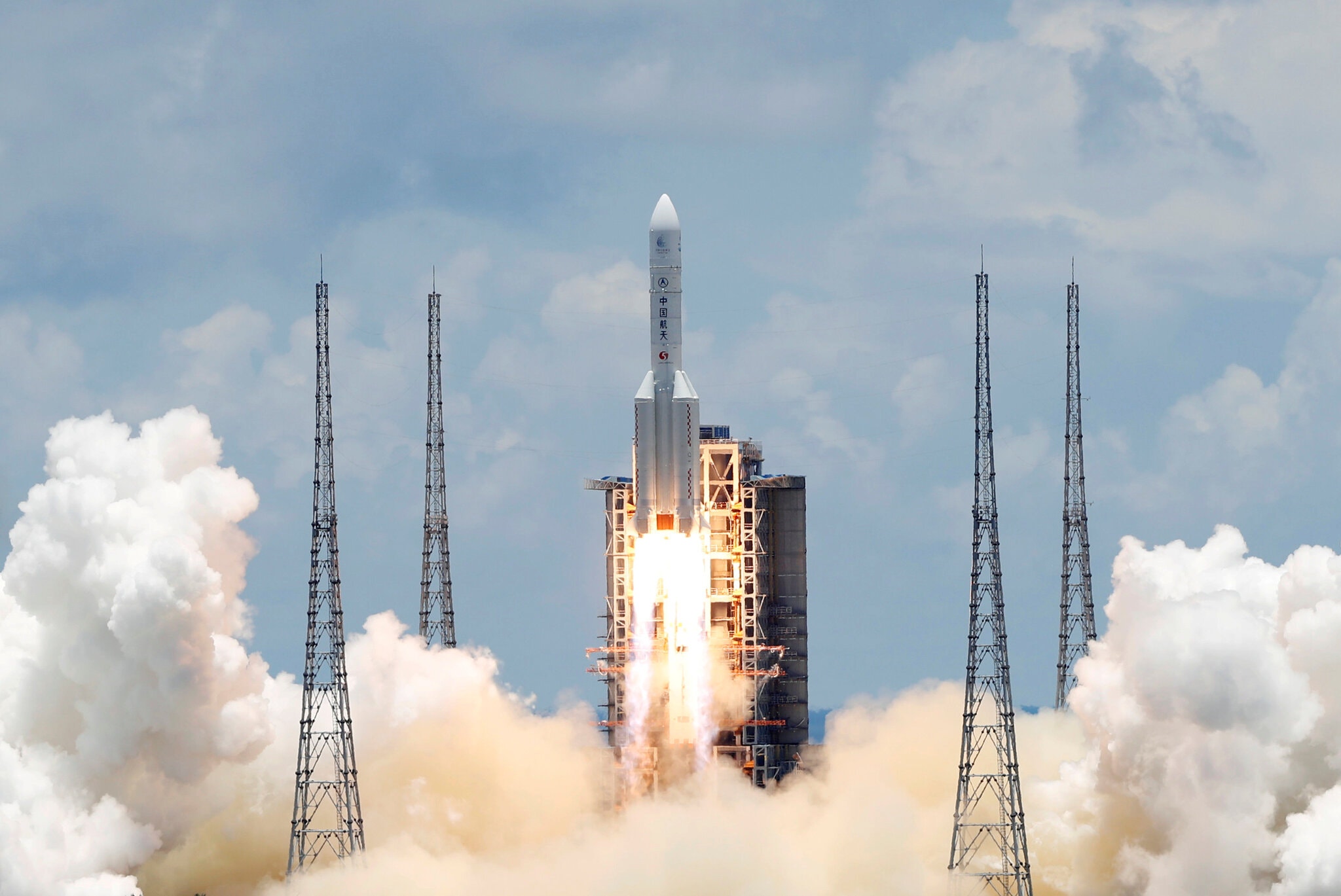 China launches a to Mars, July 23, 2020. The Long March 5 rocket was developed by China Academy of Launch Vehicle Technology, a subsidiary of CASC. (Carlos Garcia Rawlins/Reuters)

In June 2019, an affiliate of CIIC signed a contract with the China Remote Sensing Application Smart Industry Innovation Alliance (RADI), which describes itself as the “backbone for China’s remote sensing.”

CIIC’s website includes numerous photos of Tianyi meeting with Bush in China and the U.S. It also includes photos from the conference last year.

Bush is listed on a schedule of the event as giving opening remarks alongside Zhang Keijan, the director the China National Space Administration, and two local officials in the Communist party, Ma Xingrui and Guo Yonghang.

Xingrui, the governor of the Guangdong province, is a former general manager of CASC.

Bao Weimin, a senior official at CASC, also attended the symposium. He is a member of the National Committee of the Chinese People’s Political Consultative Conference, a political advisory group for the Communist Party of China.

The CIIC website shows he signed a business partnership with David Rothschild, the French banker, on March 26, 2014, with Chinese President Xi Jinping overseeing the event. An agenda for the space symposium lists Tianyi as the executive chairman of the International Peace Alliance. The organization was created under the direction of the National Development and Reform Commission, which oversees all of China’s major economic initiatives.

Russian space officials, including Lev Zeleny, the director of the Space Research Institute of the Russian Academy of Sciences, also attended the event Bush helped organize. Zeleny spoke on a panel with Yang Baohua, a vice president of CASC, and Steve Eisenhart, the chairman of the Space Foundation, according to the event brochure. (RELATED: Like Clintons, Bush Family Has Ties To Visa Program For Wealthy Foreign Investors)

A spokesman for the Space Foundation said that Eisenhart was on vacation and unavailable for comment.

CIIC’s relationship with CASC appears to be ongoing. CIIC’s website published photos of both Weimin and Baohua, the CASC executives, meeting with Tianyi last week to inspect a space center project in Hainan.

A spokesperson for the Bush China Foundation said that while the organization was not involved in the planning of the symposium, it has no objection to being cited as a supporting institution.

CASC is a central player in China’s space race. A subsidiary of the company called the China Academy of Launch Technology (CALT) built the Long March 5 rocket that launched China’s first mission to Mars last Thursday.

The Australian Strategic Policy Institute, an Australian think tank, considers CASC to be a “high risk” organization because of its work with ballistic missiles and espionage activities.

An April 2012 report from USCC, the congressional commission, said that China’s military had ramped up investments “in a wide range of passive and active means to deny a potential adversary’s ability to leverage space-based assets.”

“R&D investments include foreign satellite communications monitoring systems, electronic countermeasure systems to disrupt an opponent’s use of space-based systems, and developing the capability for physical destruction of satellites in orbit,” the report said.

The New York Times reported in April 2014 that Chinese authorities deployed CASC to use drones to track Uighurs following unrest in Xinjiang that left more than 100 people dead. The Chinese government has cracked down on the minority Uyghur population.

Weichert, the space analyst, was not aware of Bush’s space-related endeavor, but he said that the Chinese have in the past used the guise of a peaceful world space policy as a means to gain access to other nations’ technology.

He said that more than a trillion dollars is at stake through mining minerals in space.

“A lot of American businessmen are aware of what’s going on up there and they want to tap into that. That’s a huge amount of money, and if the American government isn’t going to lay the infrastructure to that they’ll happily partner with the Chinese,” Weichert told the DCNF.

He also criticized what he said was a “utopian ethic” among some businessmen and space analysts who believe that China plans to operate in concert with the U.S. in space.

“They plan to use space stalkers as an offensive weapon should conflict ever arise with the U.S.” by targeting early warning missile and surveillance satellites, Weichert said.

He also warned about the burgeoning alliance between China and Russia.

“That would be a killer combo, sort of like Batman and Superman working together,” Weichert told the DCNF. “American businesspeople would happy get on board with that.”

A top Russian space official said earlier this month that the Russian government now prefers to work with China over the United States on space issues.

Dmitry Rogozin, the head of Roscosmos, said in an interview with a Russian outlet this month, that he recently spoke with Keijan, who he described as “a very influential person and my good friend.”

“We agreed to begin the first steps towards each other precisely by defining the contours and significance of the lunar scientific base,” Rogozin said. “And I do not exclude the possibility that this project will, of course, be open to all comers, including Americans. But the initiative here may be with Russia and China.”

“China’s activities are in many ways aggressive in space,” Bridenstine told the Nikkei Asian Review. “When we think about the future of space, we want it to be peaceful.”

Russia and China each reached a milestone in their space programs this week.

China’s giant leap came Thursday with the launch of its first mission to Mars.

#Tianwen1, #China‘s first #Mars probe mission, if successful, would also mark a first in human history as it aims to achieve orbiting, landing and roving all in one go. pic.twitter.com/kzCBMIpJqx

The U.S. Space Force announced on Thursday that Russia conducted an anti-satellite test on July 15.

Axios has reported that the Bush China Foundation works closely with the U.S.-China Exchange Foundation, a group operated by Tung Chee Hwa, a Hong Kong billionaire with ties to the communist regime.

Bush has been an outspoken defender of Beijing’s policies, including to its controversial response to protesters in Hong Kong.

In one interview, Bush questioned whether “outside forces” were behind the protesters and questioned what freedoms they had lost to warrant their demonstrations.

“My first question would be, what freedoms are you seeking that you don’t already enjoy? What setbacks have you incurred,” Bush said in a Dec. 6, 2019, interview with CGTN, another Beijing-controlled news agency.

China Daily, a Beijing-controlled propaganda outlet, described Bush in December as being the co-chairman of a symposium promoting the peaceful use of space technology.

Fiona Murchake contributed to this story.