“Oneil was instrumental in supporting my own work as a community organizer early in my life, and without his help my life would have taken a very different path,” Bass said in her eulogy, which she inserted into the Congressional Record.

Bass, a California Democrat, also described Cannon as her “friend and mentor” in the eulogy, which was first unearthed by Politico on Tuesday. 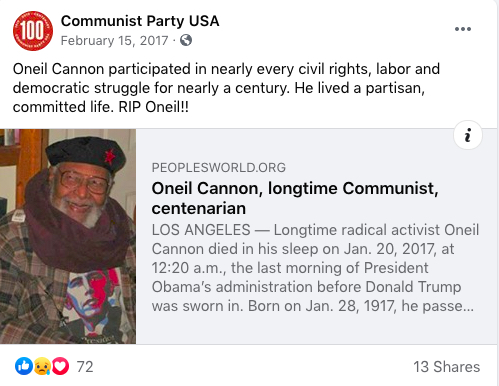 “Karen Bass has always been a Democrat and only a Democrat. The Congresswoman is friends with Kevin McCarthy and is not a Republican. She knew Oneil Cannon but never shared the political ideology he may have had at one time in his life,” Bass spokesman Zach Seidl told Politico.

Bass’s political past has come under closer scrutiny while undergoing vetting as a possible vice presidential candidate.

A spokesman for Bass told the DCNF that the congresswoman has no ties to the Nation of Islam, but wouldn’t address a question of whether Bass is willing to denounce the radical group.

Bass also praised the scandal-ridden Church of Scientology at a ribbon-cutting ceremony for a Scientology church in 2010, as the DCNF first reported on July 31.

“This day and this new Church of Scientology is an exciting moment because I know your goal and your commitment is truly to make a difference,” Bass told attendees at the ceremony.

“The Church of Scientology I know has made a difference, because your creed is a universal creed and one that speaks to all people everywhere,” she added, going on to praise Scientology founder L. Ron Hubbard.

Bass responded to the DCNF’s story on Saturday. “Ten years ago, I attended a new building opening in my district and spoke to what I think all of us believe in — respect for one another’s views, to treat all people with respect, and to fight against oppression wherever we find it,” she said in a statement posted to Twitter.

“I found an area of agreement in their beliefs — where all people, of whatever race, color, or creed are created with equal rights, which is what my remarks were about,” she added.