Principal William Miron sent an email to parents apologizing for the “appalling” appearance of the flag at the football game after a picture of the event appeared in the high school yearbook, according to Fox News’ “Tucker Carlson Tonight.” (RELATED: Gay Bar Apologizes For Flying ‘Blue Lives Matter’ Flag For Cops’ Meeting)

Nashel responded with a letter to Miron.

“As a parent and an American, I find your letter to not only be condescending and offensive but also spurious, misguided, and ironically intolerant of anyone holding views which do not confirm to the currently prescribed and carefully constructed language of wokeness,” the letter said.

Nashel said what “really seemed appalling” to him was that the principal was implicating the students in a racist act.

“So he is calling the flag that these boys are holding, these football players, he’s calling the flag racist so essentially he’s saying the boys are out there waving a racist flag around without any regard to what that might mean to the boys’ images or the boys’ futures now to be branded in such a way that clearly wasn’t their intention.”

Nashel said he was a that game and cannot remember anyone objecting to the flag being flown, only that the “there seemed to be lots of town and school unity that night.” (RELATED: San Francisco Police Banned From Wearing Thin Blue Line Face Masks) 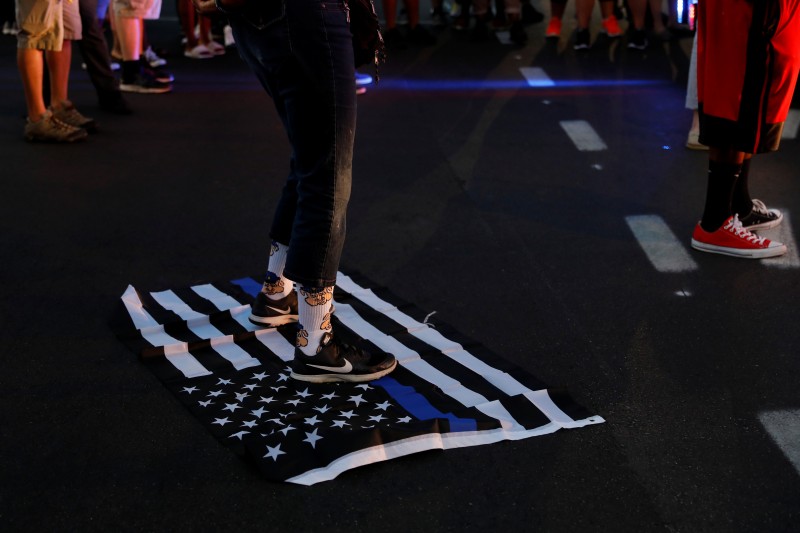 A protester stands on a “Blue Lives Matter” flag after the not guilty verdict in the murder trial of Jason Stockley, September 15, 2017. REUTERS/Whitney Curtis

The parent said he “had no intention” of appearing on national television to talk about the principal’s apology but considered it his “duty as a father and as a citizen to actually stand up and say what I’m saying.”

“I’m just talking about free speech, I’m talking about the idea that we should not be so quick to judge one another based on what the current culture is telling us is so.”

Those who protest the Blue Lives Matter movement and its thin blue line flag see it as contrary to the aims of Black Lives Matter.

A poll released in late July indicated that 49% of Americans believe that cancel culture has gone too far. The poll used the dictionary definition of cancel culture, which describes it as “the practice of withdrawing support for (or canceling) public figures and companies after they have done or said something considered objectionable or offensive.”