“Wow” came to mind in each and every stage of shooting a matched pair of titanium 20-bore Kemens. When I first opened the case and saw them like a mirror image of each other with their brilliant Baco engraving, when I shouldered the gun, when I swung at a hard crosser, the perfectly supple trigger, when I opened it to reload – every touch point and shooting experience with these surprisingly affordable exotic shotguns evoked superlatives.

To be clear, titanium shotguns do feel magical between the hands – and I’m perfectly willing to admit that perhaps I succumbed to the placebo effect from handling a shotgun made with such an exotic metal. It’s sort of like having dinner with Charlize Theron: you sure feel great doing it, but ultimately, you’re still the same slob who crawled out of bed that morning. 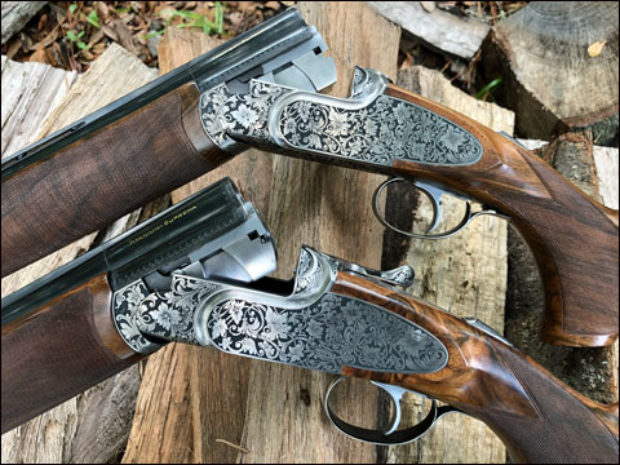 The matched pair of 20-bore Kemen Suprema Titaniums.
–
For the 32-year-old Spanish gunmaker Kemen, their titanium-receiver shotguns possess a lithe essence in the field that opens your eyes to the full potential of break-open shotguns priced south of exemplars such as the spectacular 20-bore Boss over/under.

If you ask Nagore Alverez, Kemen’s North American Sales Manager, about the differences between their steel and titanium shotguns, you’ll probably receive a response like the one in this recent email: “It is hard to understand for someone who hasn’t tried the titanium Kemen yet, the difference between the steel and titanium version is not a just question of less weight for the gun but to gain the finest balance and handling and thus better performance ever.” 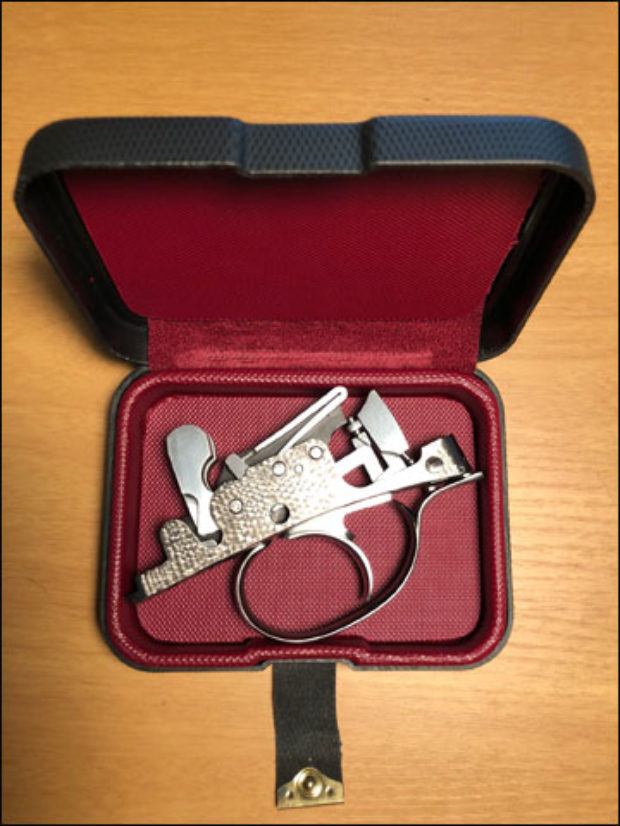 The drop-out trigger group of the Kemen Suprema Titaniums.
–
Although titanium is lighter and more corrosive resistant than steel, Ms. Alverez is asserting that titanium delivers a superior shooting experience.

That’s one of the reasons Griffin & Howe of Andover, New Jersey became Kemen’s new American distributor as well as a Premier dealer and Kemen’s American Warranty & Repair Facility. It was through Griffin & Howe that I received a Suprema Titanium matched pair.

The over/unders came with 29⅞-inch monobloc barrels and 3-inch chambers. The barrels were choked improved cylinder/modified. The barrels were fitted with vented ribs and a single brass bead at the muzzles. As demonstration models, the Turkish walnut was described as “medium grade” by Mr. Bignell, although he explained that the bespoke shotguns can be ordered with any wood grade. The pair featured a leaf-spring drop-out trigger group that is standard on all Kemen side by sides and over/unders. The safety was manual. 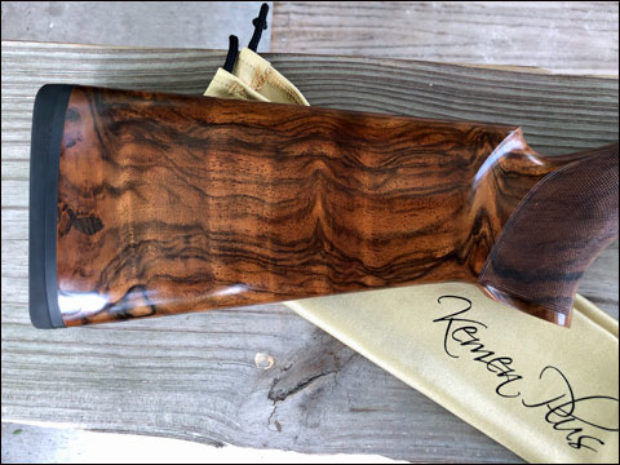 In discussing the Kemen Suprema Titanium’s weight, Mr. Bignel mentioned that Griffin & Howe also had in inventory a matched pair of 28-bore over/unders also with 29⅞-inch barrels that tipped the scales at 6 pounds, 3 ounces.

Understandably, the market for titanium shotguns is tiny. Bosis and Fabbri, among the world’s most rarified, are perhaps the only other fine gunmakers working in it. However, Mr. Bignell stressed that the Kemen receivers are pure titanium versus the others, which use titanium alloys that could be combined with materials such as aluminum, iron, molybdenum or vanadium for easier manufacturing, especially as it pertains to welding, fabrication and engraving. 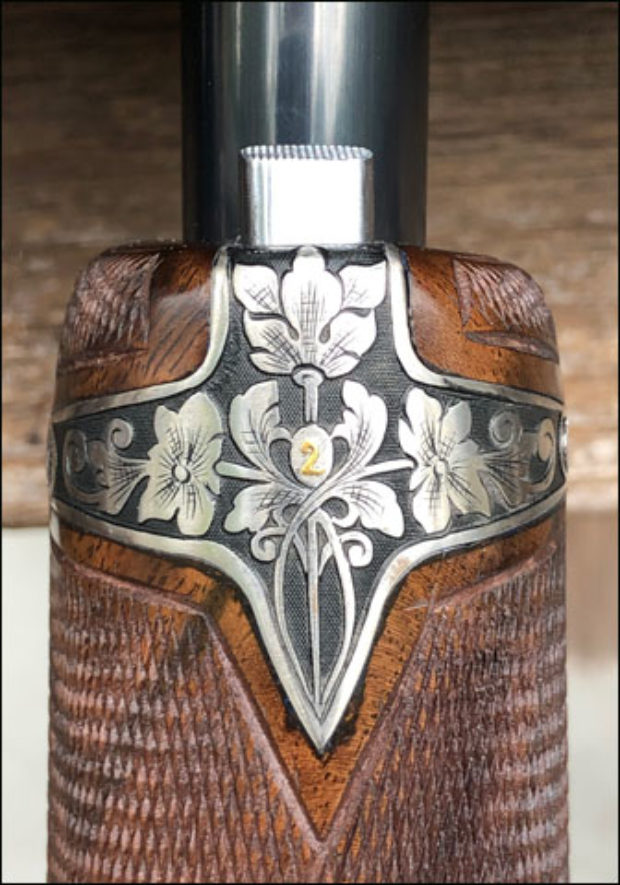 The forend finial of the Suprema Titanium matched pair illustrates the detail of Kemen’s Baco engraving pattern.
–
Titanium’s virtues make the metal a staple in aerospace, industrial processes that involve highly caustic chemicals, medical prostheses, dental implants, golf clubs and jewelry. Titanium has the highest strength-to-weight ratio of all known metals. In an unalloyed condition as applied by Kemen, titanium is as robust as steel, but less dense and naturally lighter by approximately 40 percent. Kemen says it’s been working with titanium for about 30 years – allowing the company to build a substantial knowledge base for shotgun applications.

Still, even for the most experienced manufacturers, titanium is difficult to manage chiefly for two reasons. The first is the metal’s hardness. And the second is treating the friction points with steel, since the two metals are naturally incompatible.

For manufacturers, the high pressure and speed of a drill press can cause titanium’s temperature to rise with dire consequences before it’s possible to even cut into the material. CNC machines require different speeds and feeds than steel. In some instances, entirely new equipment may be required to accommodate titanium. Even welding is more complicated, since titanium needs to be handled in a specific way during preparation. 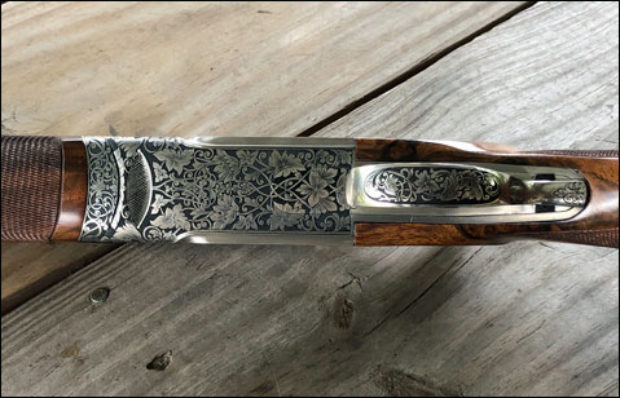 The receiver bottom of Kemen’s Suprema Titanium matched pair.
–
Kemen reports that their titanium pieces go through very expensive proprietary treatments in order to mitigate the friction between the titanium and the steel components, and consequently increase durability.

Regardless, Kemen committed to make its over/unders and side by sides both in steel and titanium in two grades, the Kemen Suprema and the Imperial field models.

Therefore, more time and hours are invested in this type of engraving versus steel. It is most evident in the sketch style of the Baco engraving on Kemen’s Suprema Titaniums. The pattern is inspired by the vineyards of Spain with intricate and artful interpretations of the leaves and grapes. It’s evocative of someone on a sunny hillside of a Spanish vineyard with pencil and sketchbook drawing the view. The name Baco pays tribute to the Roman god of the wine, Bacchus. 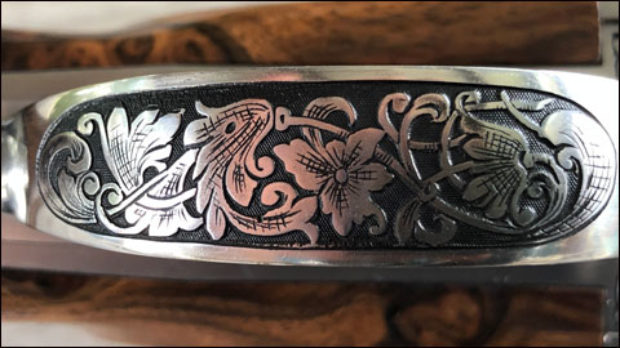 A lovely engraving pattern on a trigger guard of the Kemen Suprema Titanium matched pair.
–
The Baco engraving is rendered by three Kemen in-house engravers who have been with Kemen since the beginning and are experienced working in titanium: Asier Goitiandia, Aitor Aranburu and Ion Azkarate. Ms. Alvevrez described, the Baco process as “arduous,” adding that “It takes many hours and it is our master engravers’ own creation.”

The shotguns were certainly beautiful. But how did they shoot? I managed to find out at Southwind Sporting Clays and Quail Hunting in Quitman, Georgia.

First impression was that for a brand, new shotgun it cracked opened silky smooth. Forget all that mumbo-jumbo about waiting for your shotgun to become easier to open with use. The pinions, center lug and the Boss trusses were perfectly CNC machined. 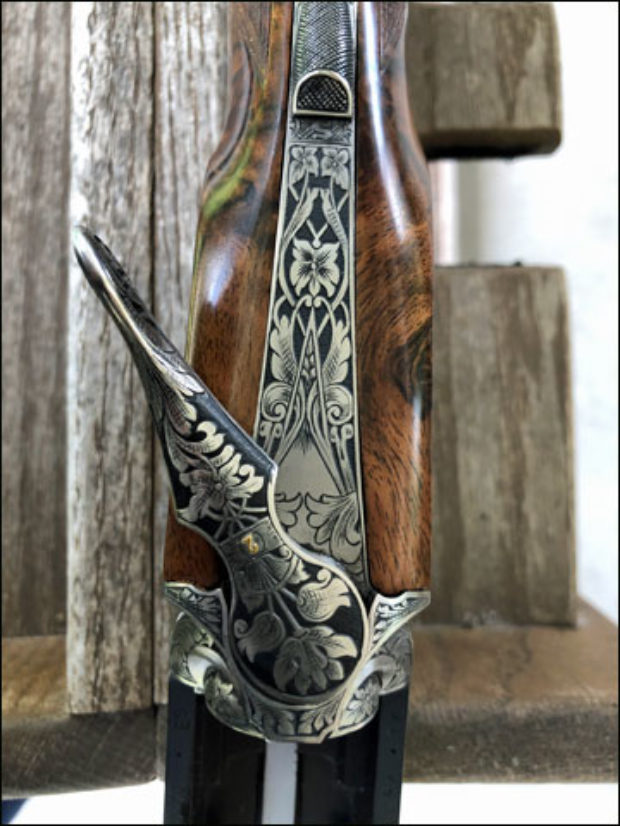 A beautiful top tang and lever on the Kemen Suprema Titanium matched pair.
–
Upland purists might cringe, but I really liked the palm swell on the pistol grip, and personally believe that more field guns should offer it. For a fast-rising covey, the palm swell provides that extra incremental control during that sudden burst of wings and feathers.

Kemen achieved perfect balance with the Suprema Titanium. Both shotguns in the pair rose to the line of the target with ease and shouldered comfortably – allowing me to smoothly merge right into the break point and continue with the swing-through.

There was zero recoil. Kemen attributes that, in part, to their “progressive forcing cones,” which reduce back pressure (while delivering better shot patterns). I’m sure that was the case, but recoil is also a function of the shotgun’s fit, balance and sight picture (not having to lift your head). The shots culminated with a smooth trigger pull devoid of creep.

Whether or not you buy into the titanium’s pragmatism of corrosion resistance and lower weight, or the bragging rights intrinsic to owning a titanium shotgun, the Kemen Suprema Titanium matched pair certainly possessed an enchanted quality that manifested itself in a pair of beautifully shooting field guns.

Irwin Greenstein is the publisher of Shotgun Life. You can reach him at  contact@shotgunlife.com.