FBI agents in 2015 sought authorization to surveil foreign government operatives who sought to influence Hillary Clinton, but ultimately settled for a defensive briefing given to lawyers for the Democratic presidential candidate, according to documents released on Sunday.

One FBI agent involved in the investigation asked then-FBI Director James Comey in an April 2015 email for a Foreign Intelligence Surveillance Act (FISA) warrant, according to the documents, published by Senate Judiciary Committee Chairman Lindsey Graham.

A FISA order was not granted in the investigation. Instead, an FBI special agent provided a defensive briefing to Clinton’s personal lawyers in October 2015.

Graham, a Republican, said that the documents are evidence of a double standard in how the FBI conducted investigations of foreign meddling regarding the Clinton and Trump campaigns.

The FBI obtained FISA orders against former Trump campaign aide Carter Page in October 2016 as part of its investigation into Russia’s meddling in the election. The FISA Court has been highly critical of the FBI over its surveillance of Page, citing numerous errors and omissions found in applications for the spy warrants.

The FBI provided defensive briefings to Donald Trump and Hillary Clinton regarding general foreign threats in August 2016. But unlike during its briefing for Clinton, the FBI used an agent in the Trump briefing to collect information as part of Crossfire Hurricane, the FBI’s counterintelligence probe of the Trump campaign. (RELATED: FBI Planted A Crossfire Hurricane Agent In Trump, Flynn Briefing)

“There was a clear double standard by the Department of Justice and FBI when it came to the Trump and Clinton campaigns in 2016,” Graham said in a statement releasing the documents, which the Justice Department declassified on Saturday.

A Senate Intelligence Committee report released on Tuesday laid out a broad effort by Russian government operatives to cozy up to members of the Trump campaign. The most troubling contacts were between Paul Manafort, a Trump campaign chairman, and Konstantin Kilimnik, who is believed to be a Russian intelligence officer.

The Senate report showed no evidence that Trump or others on the campaign sanctioned Manafort’s contacts with Kiliminik.

The Clinton campaign had fewer apparent foreign contacts than did the Trump campaign, though federal investigators uncovered at least one multi-million dollar scheme aimed at influencing the Democrat.

A federal grand jury indicted Lebanese-American businessman George Nader in December 2019 on charges that he funneled $3.5 million in foreign money to the Clinton campaign and super PACs that supported the Democrat.

Nader, who was a longtime adviser to the crown prince of Abu Dhabi, referred to Clinton as “Big Lady” in text messages in 2016 with his alleged co-conspirator, Andy Khawaja. Nader also sought access to Trump campaign officials. He was sentenced to 10 years in prison in June for a series of child sex crimes uncovered during the special counsel’s investigation.

The FBI documents released Sunday are heavily redacted and do not identify the foreign government that targeted Clinton.

“These newly released documents indicate that a foreign government was trying to influence the Clinton campaign through a campaign associate and the FBI was seeking a FISA warrant,” Graham said in a statement.

A personal attorney for Clinton did not respond to requests for comment on Sunday regarding the defensive briefing.

The records released Sunday say that the FBI opened its investigation of the foreign operation on Nov. 25, 2014, and first applied for a FISA warrant on Dec. 15, 2014.

Clinton did not declare her candidacy until April 2015, though she had been rumored for months by that time to be considering a White House run. 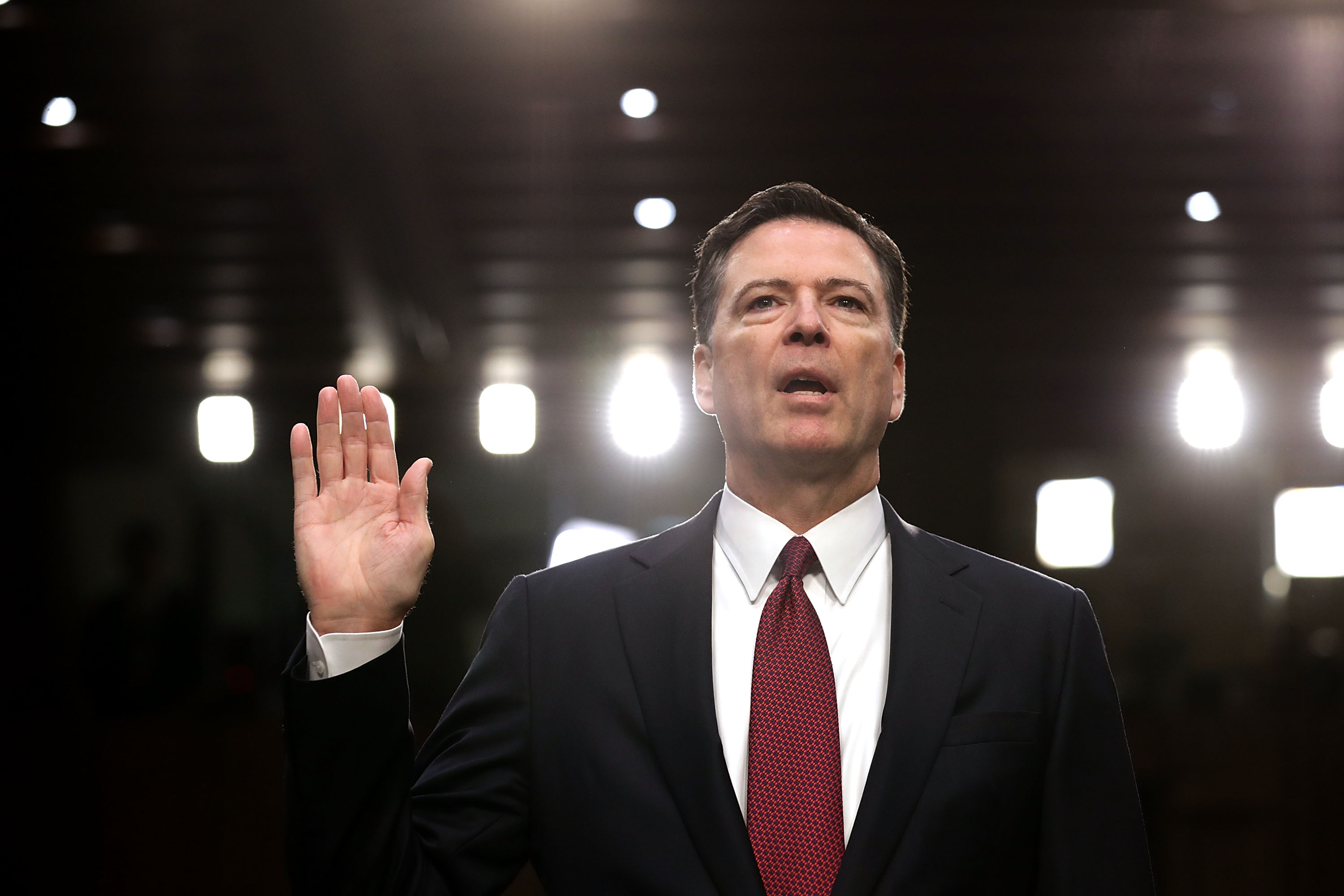 Graham released multiple emails from March and April 2015 showing internal deliberations at the FBI about the investigation of the foreign operation and the need for FISA coverage. Notes from an FBI briefing provided to Clinton’s personal lawyers on Oct. 15, 2015, are also included in the document batch.

That memo says FBI special agent David Archey advised Clinton’s lawyers that “the FBI has information that the [foreign government] is attempting to influence Hillary Clinton through lobbying efforts and campaign contributions.”

Archey would later serve as the FBI’s liaison to the special counsel’s investigation into possible links between the Trump campaign and Russia.

The memo says that the FBI provided the briefing to raise Clinton’s awareness about the foreign donations and so she “could take appropriate action to protect herself.”

According to the memo, Archey “stated the FBI felt the information was sufficiently reliable and serious that the FBI had a duty to warn.”

The declassified documents include a March 2, 2015, email, seemingly from an FBI official, noting that Clinton was preparing to announce her candidacy.

“To me, this underscores the need for us to push this FISA. By the time we get it signed and go up, we
would only be up a few weeks before she announces, at best,” reads the email.

The unidentified FBI employee said that waiting to obtain a FISA until after Clinton began her campaign “puts us even further behind the curve on the intel necessary for this operation.”

An FBI special-agent-in-charge emailed Comey on April 14, 2015, to make him aware of the foreign government’s activities.

“In short, [redacted] has identified attempts by the [foreign government] to influence the U.S. presidential election, U.S. presidential candidates, and U.S. politicians through illegal campaign contributions,” the agent wrote.

“The FISA application has remained in limbo for the last four months, even though subsequent investigative activity by [field office] provided additional probable cause for the FISA application,” the agent wrote.

The agent said they were told that the decision to put a hold on the FISA application originated “on the seventh floor,” a reference to the FBI’s executive offices.

The agent lamented that investigators “have not received a clear answer as to why we are not being allowed to use one of the only tools available against a target — FISA collection — in spite of clear legal justification.”

The agent lobbied for the FISA warrant, saying that the investigation was “superficially connected to political candidates” and that the surveillance order “does not target the candidate(s).”

Other declassified documents show that FBI officials sent a top investigator, Joseph Pientka, into a routine defensive briefing on Aug. 16, 2016 attended by Donald Trump and Flynn. FBI officials wanted to use Pientka to collect any useful information he could on Flynn.

Pientka also took part in a briefing of Hillary Clinton on Aug. 27, 2016, though the newly released documents do not show that he was tasked with collecting evidence for any investigation of the Democrat.