While Democrats and some in media have sought to tamp down concerns over incompetence and fraud hampering the vote, reports of serious flaws with mail in ballots continue to trickle out of the media. A report from the New York Times (NYT) in 2012 also recently got attention, in which the paper sounded an alarm over absentee ballots in the month leading up to the election.

“The more people you force to vote by mail, the more invalid ballots you will generate,” Ion Sancho, the election supervisor in Tallahassee, Fla., told the NYT.

Election experts say the challenges created by mailed ballots could affect the outcome in the 2012 fall election, noting elections that are too close to call could fall within what election lawyers call the ‘margin of litigation’, the grounds on which each ballot cast by mail-in voting will be scrutinized, per the report.

The problems back then have not only remained unchanged, but have been likely exacerbated since, several newer reports show.

In most cases, absentee or mail-in ballots are rejected because required signatures are missing or don’t match the one on record, or simply because the ballot arrives too late.

“If something goes wrong with any of this, that’s a problem writ large, but it’s also going to be one that hits some populations of the United States a bit harder than others, potentially disenfranchises different groups of folks at higher rates,” said Rob Griffin of the Democracy Fund, according to NPR.

Now, evidence is mounting showing the structural issues associated with mass mail-in voting ahead of this year’s presidential election.

In Nevada, 6,700 mail in ballots were uncounted in the primary after officials failed to match signatures on the ballots, according to the Associated Press. Originally more than 12,000 allots were rejected because of missing signatures or mismatched signatures, however just under half were counted after election officials contacted voters to confirm the ballots.

Another concern is administrative issues seen in local elections with fear the issue will be seen on a national scale. In New York it took more than a month to declare the winner of New York’s 12th Congressional District primary due to a delay in counting nearly half a million mail-in ballots, per the New York Times. Election lawyers said the Postal Service had issues processing some of the mail-in ballots correctly due to prepaid return envelopes, and as a result, some ballots-perhaps thousands-were wrongly disqualified, per the same report.

The New York Post reported more than 80,000 mail in ballots were disqualified from the June presidential primary I New York race because of postage or other issues. A federal judge ruled thousands of voters were disenfranchised because of the procession of the ballots.

In Maryland, where all registered voters were automatically supposed to get mail-in ballots, about 160,000 ballots weren’t delivered, according to CNN.

In Wisconsin, where President Donald Trump won by about 22,000 votes, about 14,000 absentee voters never received a ballot, per CNN. In their April primary, about 23,000 votes cast by mail were tossed out because they arrived late or were filled out incorrectly, according ABC News. Missing or uncounted ballots could make all the difference in key swing states. 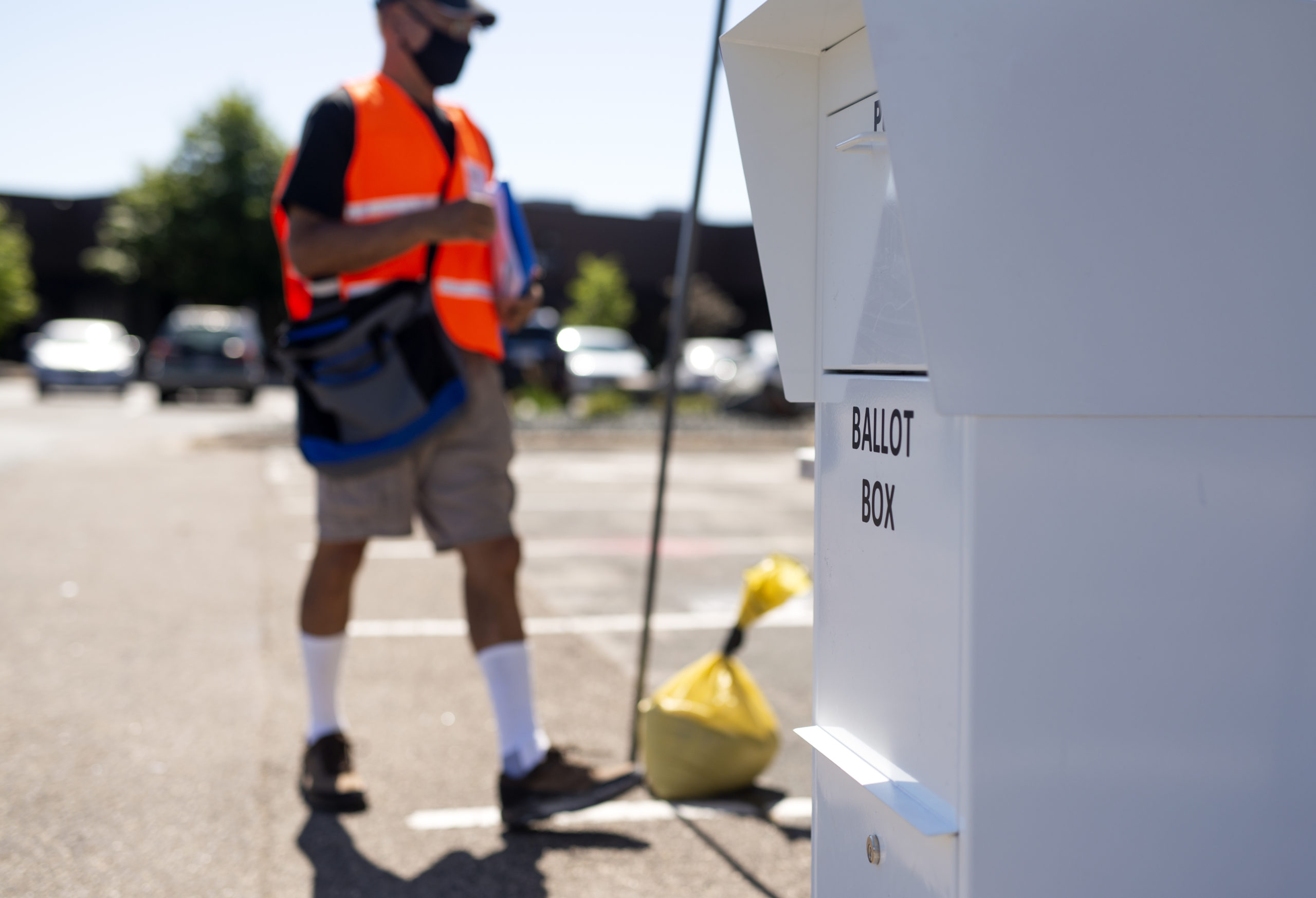 MINNEAPOLIS, MN – AUGUST 11: A ballot box stands at a drive through drop-off for absentee ballots on August 11, 2020 in Minneapolis, Minnesota. (Photo by Stephen Maturen/Getty Images)

More than 100,000 mail-in ballots were rejected in California’s March presidential primary, according to the AP. Around 70,000 ballots were disqualified for missing the deadline for the ballot to be mailed and arrived, Another 27,525 didn’t have a signature or the signature didn’t match the one on record for the voter, per the same report. While California, which Trump lost by over 4 million votes in 2016, might not be an issue for the presidential race, U.S house races could be at stake. In 2018, Democrat TJ Cox beat Republican David Valadao by less than 1,000 votes. They have a rematch this November.

In Montclair, New Jersey, Sean Spiller was sworn in as mayor, beating his opponent by only 195 votes. But local voting rights activists protested his swearing in, as more than 1,100 mail in ballots were uncounted in the election due to mismatched signatures, ballots never making it to the post office, and the inability for voters to know whether their vote had been counted. (RELATED: Trump Campaign Sues New Jersey Over Mail-In Ballots)

More than 15,000 mail-in ballots were rejected in Kentucky’s primary due to lack of or mismatched signatures. Others were disqualified because the envelope was unsealed.