Two police union executives from different areas of the country told the Daily Caller News Foundation that some district attorneys in riot hotbeds are allowing unrest to continue through lenient policies and reduced charges.

Vice president of the Sergeants Benevolent Association (SBA) Vincent Vallelong and vice president emeritus of the International Union of Police Associations (IUPA) Dennis Slocumb concurred in separate phone interviews with the DCNF that some DAs are doing more harm than good amid nationwide unrest. Both claimed that local prosecutors are freeing individuals at alarming rates, reducing their charges and sending them back onto the street for seemingly never ending spells of rioting in some areas.

Riots and protests have occurred in cities across the country since the death of George Floyd, who died after a police officer knelt on his neck for over eight minutes, video shows. Civil unrest surged in recent weeks following the police shooting of Jacob Blake, who was shot several times in the  back after when police attempted to arrest him, video showed.

“We can do our job if we’re allowed to, the problem is the district attorneys are not doing theirs, they’re dropping the charges on these people and making them lesser charges,” Vallelong told the DCNF. “It creates exactly what you have in Portland, you have night after night of rioting that just doesn’t end.”

“If you’re letting the leaders of these groups out — what they would call their captains or their generals — just to fight the next day, what’s the point of locking them up? Just let them run amuck through the streets and destroy everything if that’s the case,” he continued.

Slocumb said, “One of the things that’s occurring is we have district attorneys who no longer view themselves as prosecutors.”

“If you don’t have prosecutors willing to prosecute, then the police can make all the arrests they want and it’s not going to matter, they’re going to walk right back out and do the same thing tomorrow,” he continued.

The city of Portland marked its 100th day of protests and demonstrations Saturday, according to Fox News, with unrest that police declared a riot. Both Vallelong and Slocumb used the city as a reference point for a perceived lack of prosecutorial willingness.

Multnomah County District Attorney Mike Schmidt, whose jurisdiction includes Portland, has said he would decline to bring charges against protesters for lesser offenses like interfering with police or ignored directives to clear the streets, according to KGW 8. Schmidt told the news source that his office was primarily focused on violent crimes and the city’s increase in gun offenses.

“We continue to prioritize public safety resources in Multnomah County by focusing on the violent crimes occurring at protests and in our community, including the recent and alarming increase in gun violence this summer,” Schmidt told the local outlet.

Schmidt’s office did not immediately respond to a request for comment from the DCNF.

The federal government decided to step in on Wednesday with the Department of Justice deputizing Oregon State Patrol officers in order to bypass Schmidt’s charging decisions for federal charges, KGW 8 reported.

The pair of police union bosses applauded the decision and said similar policies can be used to quell unrest throughout the nation.

“One of the things in Oregon is that they have now deputized the state police as federal agents, so the arrests they make will bypass the district attorney in Portland and seek federal prosecution,” Slocumb said.

“What was just done, which I applaud the DOJ for, is they deputized the sheriffs in Portland,” Vallelong said. “Now they took away the ability for the district attorney, who is a far-left liberal that won’t even try some of these cases, and now put it in the hands of the federal government, where now they can try these people. So now, that district attorney has been neutered — that is the best thing that can happen across the board for this country right now.” 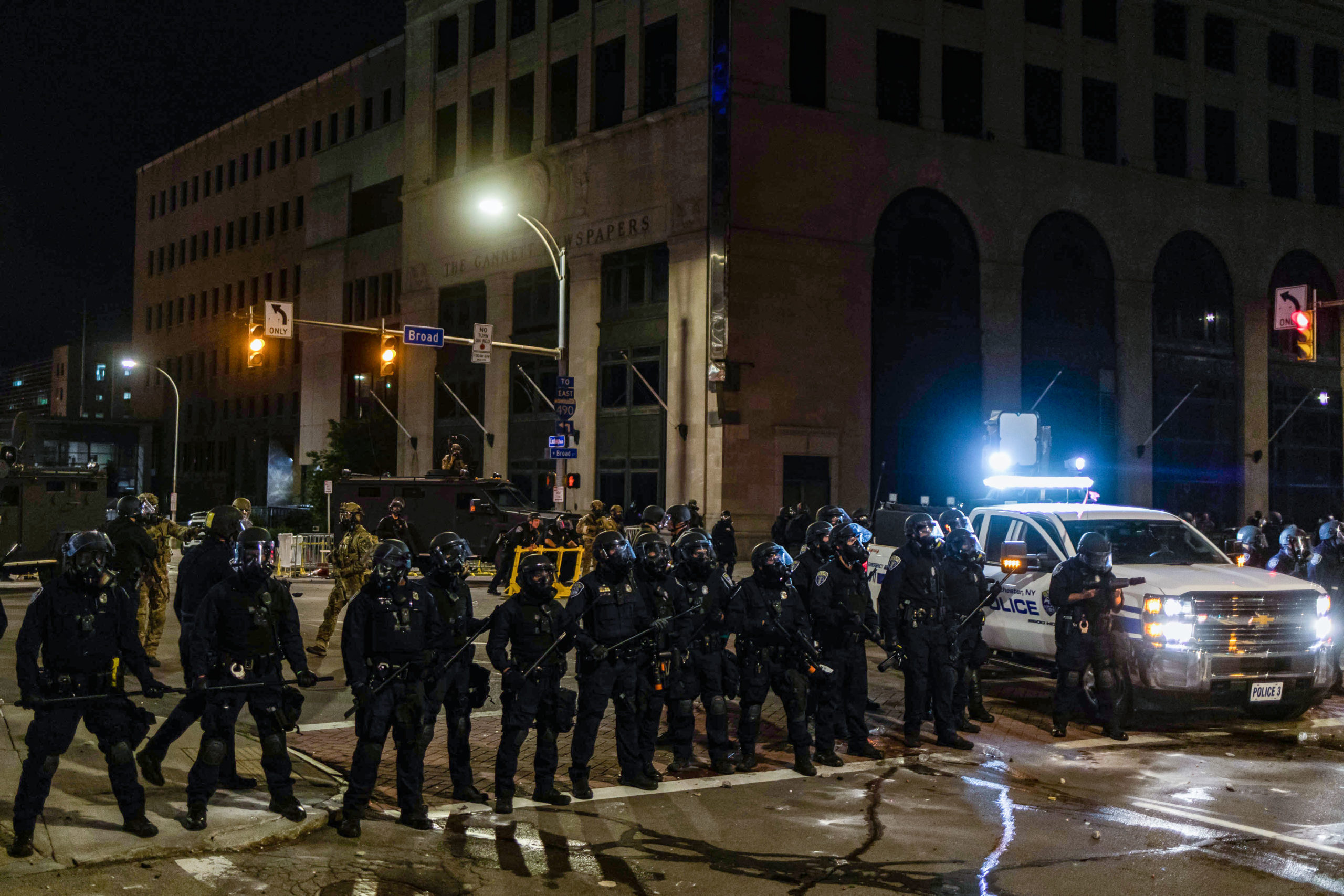 Rochester Police in riot gear stand in Rochester, New York, on September 5, 2020, on the fourth night of protest following the release of video showing the death of Daniel Prude (MARANIE R. STAAB/AFP via Getty Images).

The two police union officials also took issue with some independent bail programs, like the Minnesota Freedom Fund (MFF), that provide bail money for the potential release of inmates pending a judge’s decision.

MFF was accused in August of using their $35 million in funding to aid in the release of a suspect who allegedly fired a gun at police, a woman accused of murdering her friend and a sex offender with two prior convictions, according to Fox 9.

According to Slocumb and Vallelong, organizations like MFF have contributed to the continuation of unrest.

“It’s not helpful,” Slocumb said. “It’s disheartening to arrest the same people over and over.”

Vallelong said the MFF “should be investigated and they should lose their non-profit status if what it is they’re doing is aiding and abetting criminality.”

Slocumb told the DCNF that an effective way to curb these non-profit release programs is for DAs to advocate for raising bail further in order to persuade judges to make adjustments. (RELATED: ‘A Gut Punch,’ ‘We Just Feel Abandoned’: Police Union Execs Sound Off About Lack Of Morale That They Say Is Resulting From Politicians)

“Somebody’s going to run out of money posting those bails if those bails are significant.”

The COVID-19 pandemic has led jails throughout the country to lower bail, release inmates early and decline to lock up offenders for minor crimes, according to the Prison Policy initiative. Washington County, Oregon, in April made efforts to halve the prison population by releasing inmates early for “low-level” offenses, the advocacy organization reported.

The Prison Policy Initiative has not indicated any such reformative changes in Multnomah County, Oregon, where Portland is located, but the county sheriff’s webpage indicated that those behind bars may be released two weeks early due to the virus.

Vallelong and Slocumb also proposed another measure to reduce civil unrest, suggesting officers should make an effort to not allow rioters to be anonymous once arrested.

“They get in, do what they have to do, feel like a hero or feel like they took some sort of action and then they run and they cower to their little apartments or to their little online jobs and they don’t have to worry about anything else in life at that point,” Vallelong said.

The SBA vice president said departments should compile data on these people and make efforts to release mugshots as frequently as possible to strip away anonymity in order to discourage violent behavior.

“All of these people should be put into a central database and if they all want to be Antifa, classify them as a Antifa,” Vallelong said.

Slocumb largely agreed with Vallelong and said reducing anonymity may have an effect on criminals by exposing their behavior to family and friends.

“If their friends and relatives see that they were out looting or committing acts of arson or attacking people on the street there would be social pressures on them to get their act together,” he said.