A museum in the U.K. has removed its famous collection of shrunken heads, along with other human remains like an Egyptian mummy, as part of its effort to “decolonize” its collection after accusations of racism, the AP reported.

Oxford University’s Pitt Rivers Museum decided to remove 120 human remains including the shrunken heads after it began an ethical review of the collection in 2017, and received charges of racism and cultural insensitivity for continuing to display the remains. The museum is known as one of the world’s leading institutions for anthropology, ethnography and archaeology.

“Our audience research has shown that visitors often saw the museum’s displays of human remains as a testament to other cultures being ‘savage’, ‘primitive’ or ‘gruesome’,’’ museum director Laura Van Broekhoven said according to the AP.

“Rather than enabling our visitors to reach a deeper understanding of each other’s ways of being, the displays reinforced racist and stereotypical thinking that goes against the museum’s values today.’’

Part of the ethical review included discussions with Universidad de San Francisco in Quito, Peru, and representatives of the Shuar indigenous community about the shrunken heads, known as tsantsa by the Shuar. 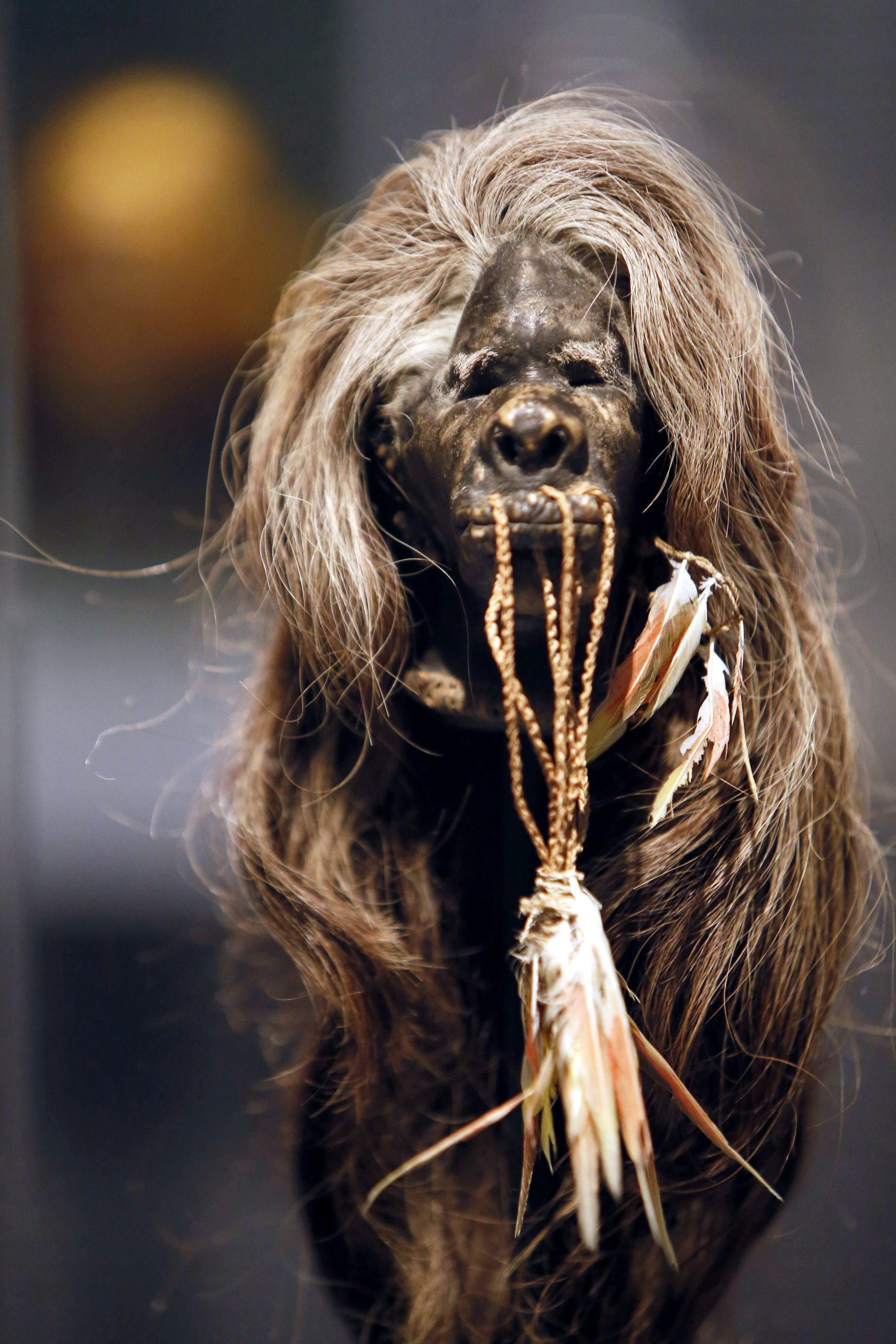 A picture taken on September 17, 2012 at the Quai Branly Museum in Paris, shows a Shrunken head Tsantsa from the Shuar tribe in Equator (19th century)displayed during the exhibition entitled “The art of Hair frivolities and trophies” (Cheveux Chéris, frivolités et trophées). The event takes place until July 14, 2013. The head is made with human tissue, hair, vegetal fiber and feathers. (KENZO TRIBOUILLARD/AFP/GettyImages)

A shrunken head is created by separating skin and hair from the skull, then sewing the eyelids shut and using a peg to close the mouth. The heads would then be put in a big pot and boiled for a period of time, according to Smithsonian Magazine. In the Shuar culture, shrunken heads are extremely important religious symbols.

Naga trophy heads and an Egyptian mummy of a child were also removed from the museum. The decision to remove items brought to Britain from conquered lands comes amid protests in the U.S. and U.K. following the death of George Floyd in May after a Minneapolis police officer knelt on his neck for more than 8 minutes.

The Pitt Rivers museum closure during the pandemic also gave staff the opportunity to make the changes before the Sept. 22 reopening, which will include interpretive displays explaining why the items were removed and new labels on many artifacts, according to the AP. 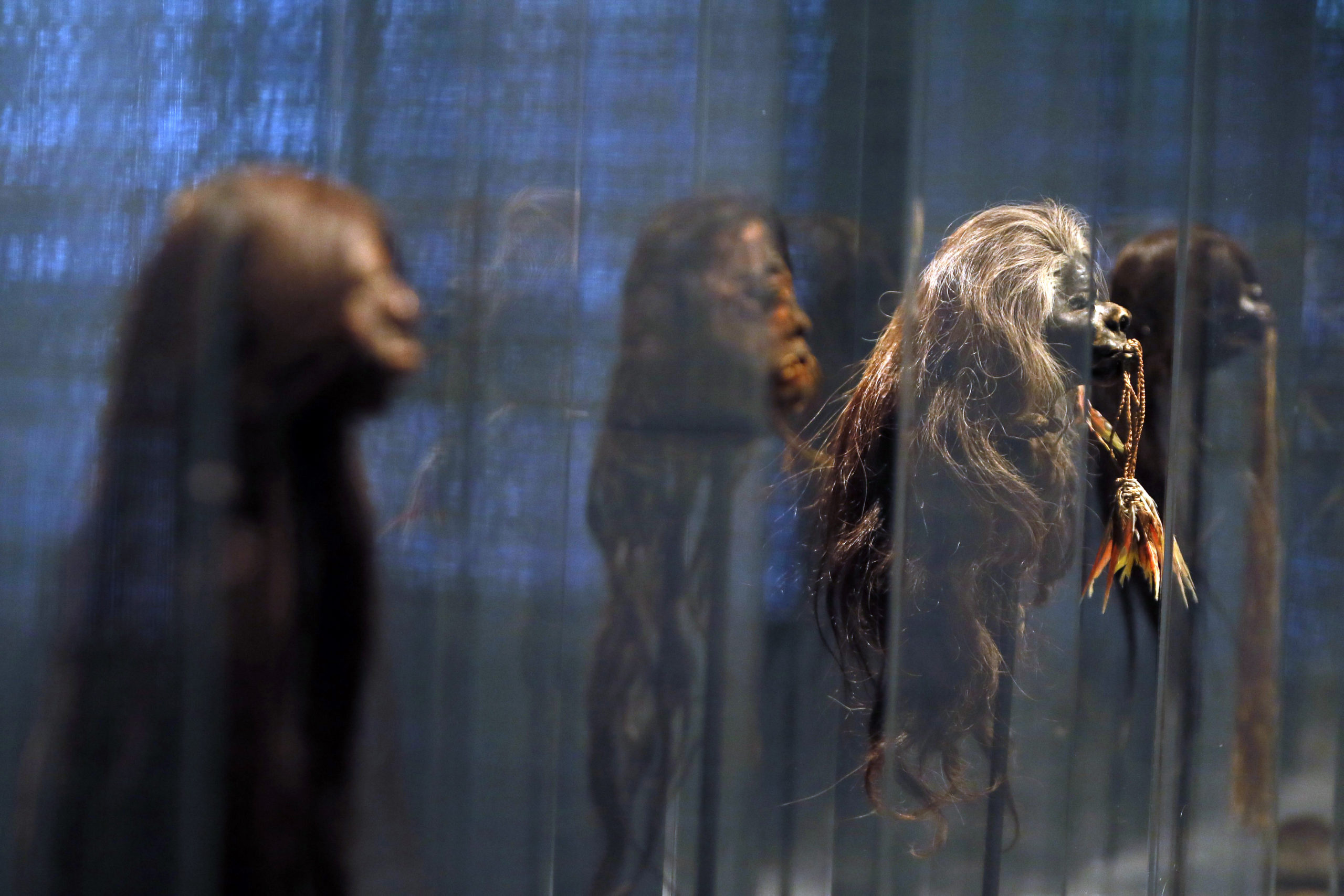 A picture taken on September 17, 2012 at the Quai Branly Museum in Paris, shows Shrunken heads Tsantsa from the Shuar tribe in Equator (19th century)displayed during the exhibition entitled “The art of Hair frivolities and trophies” (KENZO TRIBOUILLARD/AFP/GettyImages)

“A lot of people might think about the removal of certain objects or the idea of restitution as a loss, but what we are trying to show is that we aren’t losing anything but creating space for more expansive stories,” said Marenka Thompson-Odlum, a research associate who curated several of the new displays, said according to the AP. “That is at the heart of decolonization.”

The human remains will be moved into storage as the museum plans to reach out to descendant communities about how to care for the roughly 2,800 human remains that remain in the museum’s care.

Museums in the U.S. have also responded to the national argument over racism and police brutality. The taxpayer-funded Smithsonian Institute’s National Museum of African American History & Culture (NMAAHC) published on its website a guide explaining aspects of whiteness and the normalization of white racial identity in America. (RELATED: Smithsonian Museum Says Objective Thinking Is A Sign Of ‘Whiteness’)

Aspects of whiteness and white culture include an “emphasis on the scientific method,” which involves “objective, rational linear thinking,” “cause and effect relationships,” and “quantitative emphasis,” according to a graphic created by the museum. The museum warned that the dominance of white culture in America “leads to an internalized racial superiority for those who adhere to it,”

The chief curator of the San Francisco Museum of Modern Art also resigned in July after a petition demanded his departure for allegedly using the phrase “reverse discrimination” and saying he wouldn’t exclude white male artists from contributing to art collections.