President Donald Trump’s businesses have profited at least $8 million since he took office as Trump uses his private businesses to host presidential dealings, per a Washington Post report published Tuesday.

Despite stepping down from all businesses prior to assuming the office of the presidency, the businesses that bear his family name have played host to a number of formal government functions. In February 2017, Trump hosted Japanese Prime Minister Shinzo Abe at his private Mar-a-Lago club. Trump’s aides also needed lodging for the duration of the trip, leaving taxpayers responsible for shouldering the costs. While federal policy dictated the per diem rate for rooming was $182, Mar-a-Lago charged well above that, according to The Washington Post.

“[There’s] a five bedroom house that three of the senior staff are staying in at $2,600 per night,” State Department employee Michael Dobbs wrote to colleagues, per the report. “The other two Senior staffers (Bannon and Walsh) are expected to be charged $546 for their rooms.”

Policy allows the State Department to pay up to three times the normal limit – $546 in this instance – with authorization, which the White House gave, per the same report. Mar-a-Lago later lowered the rate charged to the State Department and provided partial refunds for some earlier charges, The Washington Post reported. 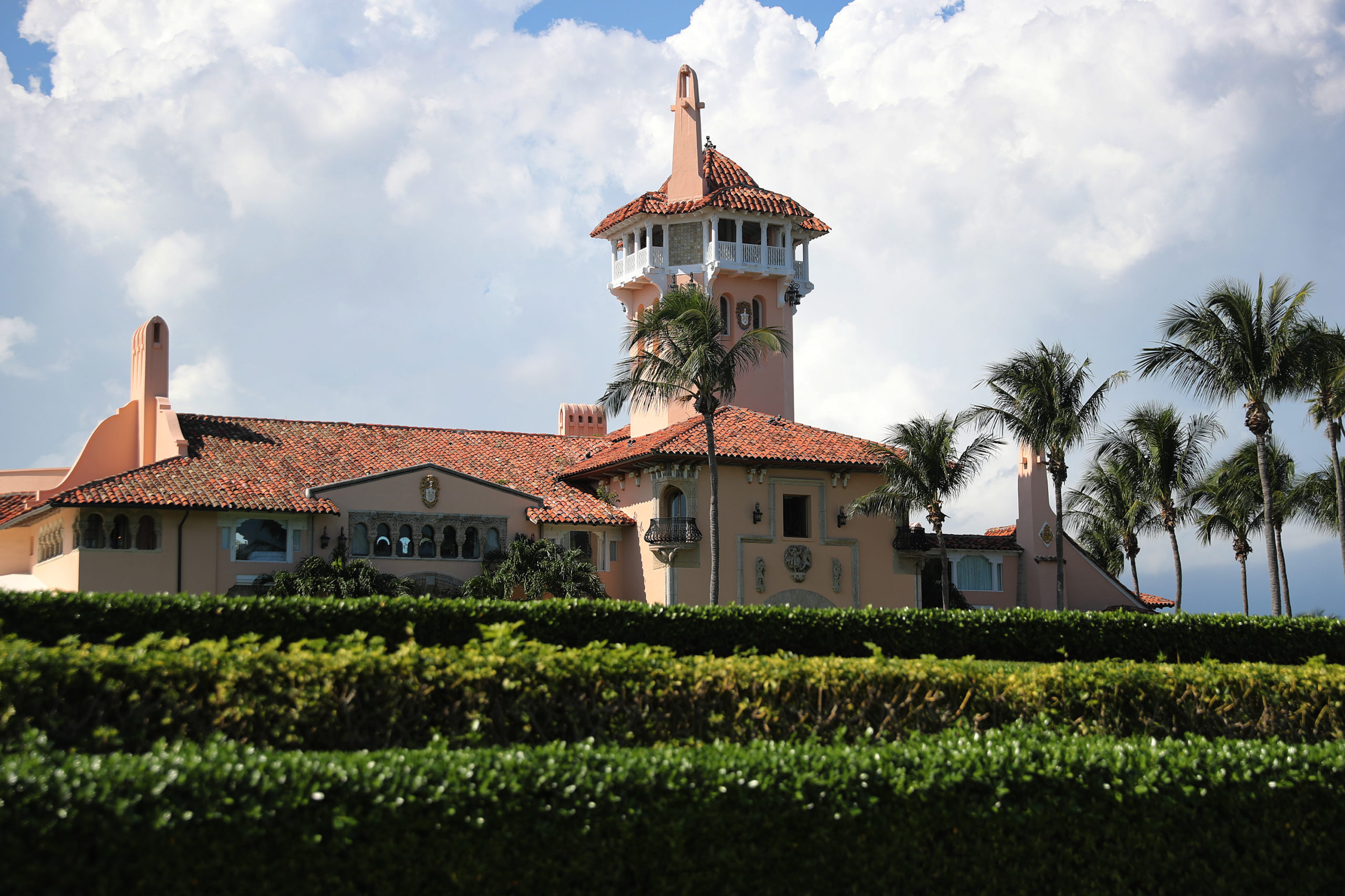 Trump hosted Abe at his private Mar-A-Lago again in 2018, opting out of hosting the leader at the White House. His Palm Beach, Florida, club charged the State Department $13,700 for guest rooms, $16,500 for food and wine and $6,000 for roses and floral arrangements, according to documents obtained by The Washington Post. The club also reportedly billed the government $3 for water.

Trump has reportedly visited his own hotels and clubs more than 280 times, turning them into hosting sites for GOP events and fundraisers for his reelection campaign. Trump said he hosts events there because “people like my product, what can I tell you, can’t help it,” per the Post. 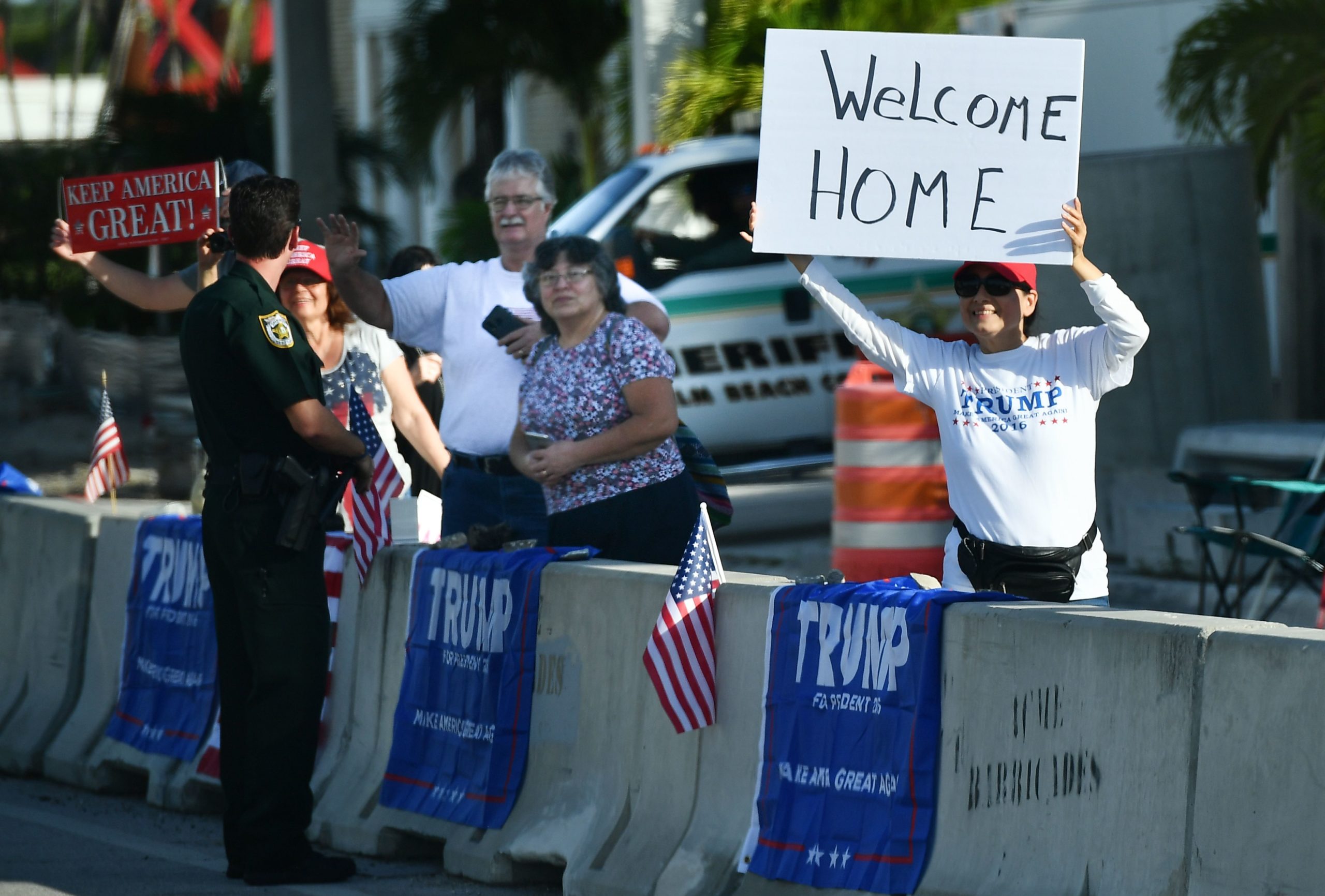 A supporter of US President Donald Trump holds up a placard in West Palm Beach, Florida near his Mar-a-Lago resort on Nov. 27, 2019. (Photo by MANDEL NGAN/AFP via Getty Images)

Since 2017, the companies have charged for hotel rooms, ballrooms, cottages, rental houses, golf carts, candles, furniture, resort fees, cakes, $88 bottles of wine and $1,000 worth of liquor for White House aides, per The Washington Post. Trump’s Bedminster, New Jersey, club has reportedly charged the Secret Service $17,000 per month to rent a cottage from May to November in case Trump had suddenly decided to visit. The Secret Service was reportedly charged $32,400 for guest rooms for a two-week stay at Christmas in 2019. (RELATED: DHS To Release Mar-a-Lago Visitor Records As Part Of Ethics Lawsuit)

Trump’s campaign and fundraising committee paid $5.6 million to his companies since he took office, per the same report. His frequent visits to his Palm Beach residence prompted Democrats in 2017 to get a watchdog group to examine the costs of Trump’s visits.

“Americans elect a president to serve the people, not profit off them. Yet President Trump exploits his office to line his pockets with taxpayer dollars,” Ryan Shapiro of Property of the People, whose lawsuits and public-records requests explore the details of the spending, said per the report. Some records are reportedly unavailable, with the State Department and White House refusing to release the records. “The amounts we’re seeing are just the tip of the iceberg,” Shapiro said.

White House spokesman Judd Deere called the claims that Trump used taxpayers to make a profit a “lie” in an official statement to the Daily Caller.

“This is nothing more than a politically-motivated hit piece against the President and The Trump Organization,” Deere said. “President Trump turned over the day-to-day responsibilities of the business before he took office and any suggestion that the President has used his own official travel or the federal government as a way to profit off of taxpayers is an absolute disgrace and lie.”

“This President is fighting for the American people, not the business that bears his name,” Deere told the Caller.