Democratic Georgia Senate candidate Raphael Warnock has criticized the second amendment multiple times in his sermons, something that has caused gun owners in the state to worry about the upcoming runoff election in January.

Warnock, who is running against Republican Georgia Sen. Kelly Loeffler, has openly voiced his concern with guns in multiple videos reviewed by the Daily Caller and has said he believes Georgia needs stricter gun laws. Warnock also has been supported by a number of groups who support a ban on assault weapons. Gun groups in Georgia, who work to defend gun rights, shared their concerns with Warnock’s stance on the second amendment when contacted by the Caller.

In a 2014 sermon, Warnock criticized politicians who attend church on Sundays and then write “the dumbest” gun legislation “you can ever imagine.”

“And that’s why you’ve got politicians who go to church every Sunday morning, and then walk into that capitol, stand under that gold dome, and come up with the dumbest legislation you can ever imagine. ‘What we need is more guns, in more places, by more people.’ Think about all the crazy people you bump into just on the routine, every week. On your job, on the street, some of them in church – don’t look at ‘em. Imagine all them people with guns,” Warnock said in the sermon.

During another 2014 sermon, Warnock labeled Georgia’s gun laws as being “some of the most lax” in the country.

“Just yesterday I testified before the State Legislators at the Georgia capital. Georgia has some of the most lax gun laws in the country. Georgia’s idea of gun control is whether you can hold your rifle straight. With all of the lax gun laws in Georgia, they’ve decided that they aren’t lax enough. We’ve got the fifth-highest population of uninsured individuals, and with all of the issues, we’re almost last in education, we haven’t figured out how to provide healthcare to all of these uninsured people, Governor will not expand Medicaid, and in the midst of all that’s going on I had to go to the capital yesterday because they’ve decided that what we really need is more guns, and more access to guns by more people in more places…,” Warnock said. 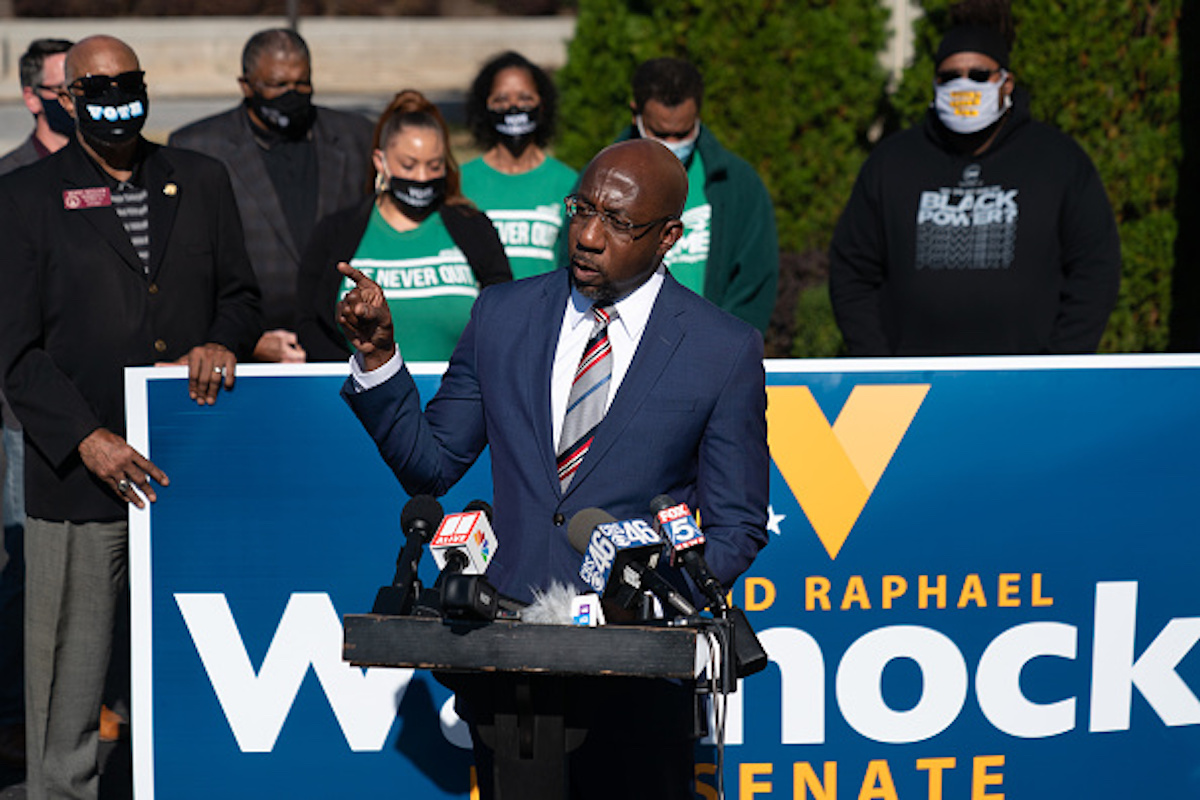 Warnock also criticized pro-gun politicians in a December 2015 sermon, stating, “I didn’t elect you to pray.”

“The politicians, who don’t even go to church, or who go to church but the church ain’t in them, talking about they’re praying for us. I didn’t elect you to pray. You oughta leave the praying to me. Now, that might seem like a strange statement from a preacher, but I will tell you this morning, some prayers I don’t need,” he said during the sermon. 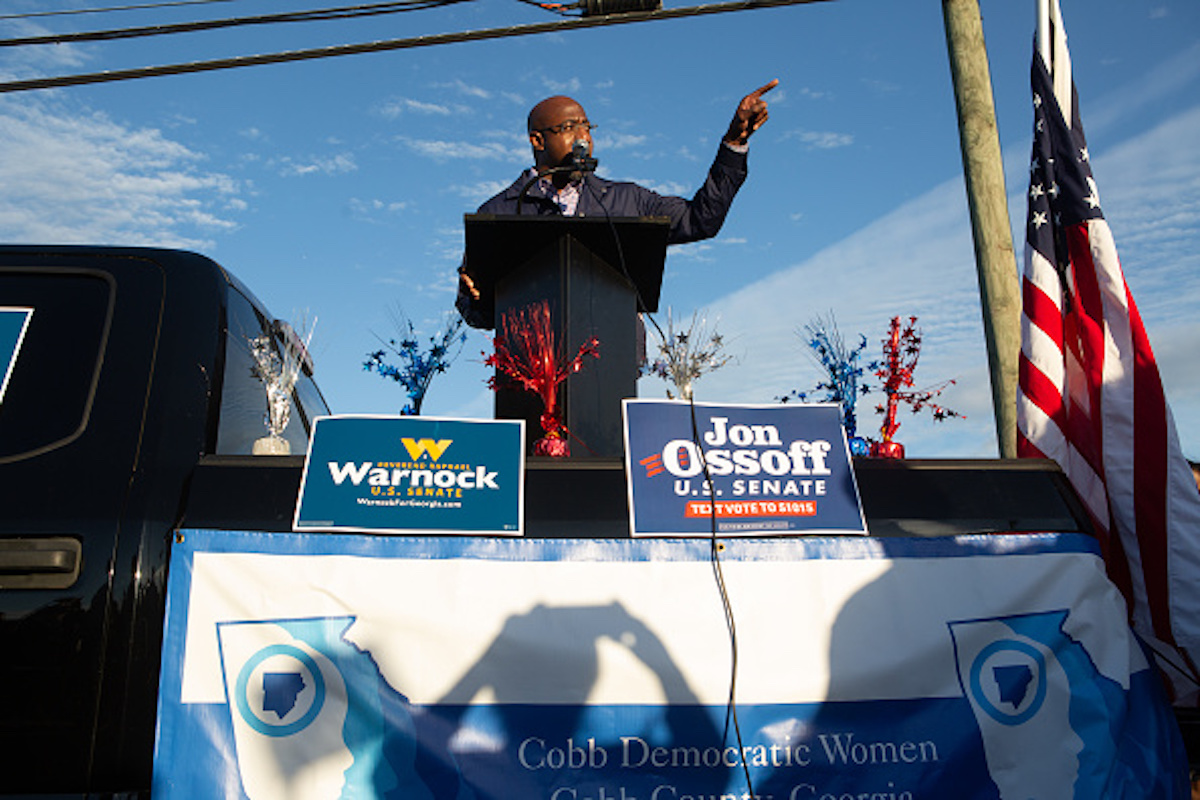 Democratic U.S. Senate candidate Raphael Warnock of Georgia speaks to supporters during a rally on November 15, 2020 in Marietta, Georgia.(Photo by Jessica McGowan/Getty Images)

The Daily Caller contacted a few gun groups in Georgia, who both slammed Warnock’s comments and voiced their concerns with the possibility of him being elected to the Senate. Jerry Henry, who is the executive director of a Georgia gun group called GeorigaCarry.org, explained his disdain for Warnock, saying he believes his views on the second amendment would hurt gun owners in the state.

“Well, they can stack the Supreme Court, but they’ve got to change the Constitution in order to take my rights away from me. And plus the fact that it’s not the government who gives me my rights. So I guess if they want another civil war, we can probably have another one of those. But I don’t think that he (Warnock), even though they will try to do everything they can to infringe and curb our rights, I don’t think that they will be the final answer on it,” Henry told the Caller. (RELATED: Warnock Said America Should ‘Repent’ For Supporting Donald Trump In 2016 Speech)

“I do not look forward to having to fight Democrats over gun control and that would be what we would have to do if he (Warnock) were to get elected. The question is how far could they really go? You know, it’ll take more than one bill or it’ll take more than an executive order to strip us of our rights, but that doesn’t mean they won’t try. Don’t get me wrong,” Henry continued. (RELATED: Raphael Warnock Dodges Question From CNN’s Jake Tapper About Whether He Attended Fidel Castro Speech)

Patrick Parsons, the Executive Director of Georgia Gun Owners, slammed Warnock when asked by the Caller about his views on the second amendment.

“Warnock is the most radical anti-gunner ever on the ballot in Georgia history. Even more radical than his top supporter, Socialist Stacey Abrams. If he gets his way, Georgians can expect a tyrannical federal government gun control scheme hell-bent on banning, confiscating, and destroying their firearms. Warnock would be nothing more than a rubber stamp for the Harris-Biden administration,” Parsons told the Caller.

Warnock’s campaign did not immediately respond to the Caller when asked about his comments on guns.