Who introduced you to hunting/the shooting sports and at what age?

My father introduced me to hunting and the shooting sports at a very young age. He started by stressing gun safety. My brother and I learned to shoot at first with a 1924 German-made bolt action single shot .22 caliber rifle. I have since taught my three boys to shoot with the same gun. After taking my first hunter safety course as a teenager, I began to use a shotgun and shot a lot of clay pigeons with it. Ever since, each year I have almost exclusively hunted deer. 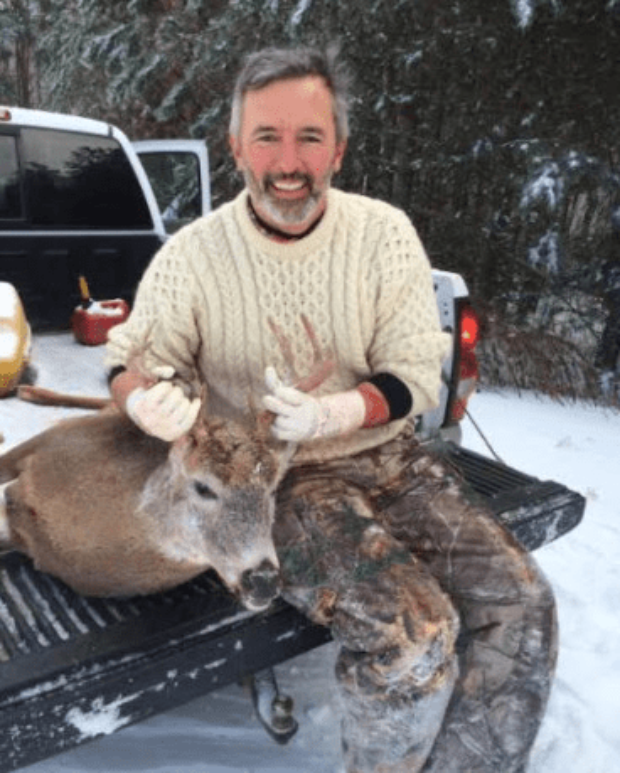 Describe your most recent hunting/shooting sports activity? With whom?

Opening Day for deer season in Upstate New York is always the weekend before Thanksgiving. My oldest son Sean and I hunted this year on opening day, as we always do, on my in-law’s farm. We both got deer that morning. It is always a special time to go hunting with my son and to hang out at the family farmhouse. We met up with some locals whom we have hunted with for years in the afternoon and did a few drives and got another deer. It was a great time.

As you may have gathered, I love deer hunting! I have been doing it for 40 years. The best thing about it is the beautiful sounds of the woods. I always start and end my hunting day in my cherished tree stand sitting halfway up a ridge with a beautiful view of the woods and surrounding area. To hear the tranquil sounds of the breeze on the trees and the various animals running around, chipmunks, minks, fox and even some coyotes is awesome. Of course, the excitement of seeing a deer and deciding whether to take it is the ultimate hunting rush.

Which piece of pending legislation related to the firearm industry is particularly important to you and why?

Since coming to Congress, I have consistently heard from sports enthusiasts and firearm owners in Central New York about the patchwork of laws they have to navigate when traveling across state lines. With this in mind, I look forward to continuing to work with my colleagues to advance the bipartisan Concealed Carry Reciprocity Act (H.R. 38). Congress must continue working to provide certainty to law-abiding firearm owners and ensure the fair recognition of concealed carry permits across the country.

What do you see as the challenges and opportunities for hunters and shooting sports enthusiasts in the upcoming congressional session?

In addition to advocating for sensible legislation to protect the rights of sportsmen and sportswomen, I believe Congress has a responsibility to encourage conservation and preserve the American outdoors for future generations of sportsmen and sportswomen. I was proud to support the introduction and enactment of the Great American Outdoors Act, which will significantly increase the availability of federal resources for conservation projects in my district and across the country. For sports enthusiasts, it is critical that lawmakers work with federal agencies to fully implement the Great American Outdoors Act and continue to prioritize other federal conservation programs such as the North American Wetlands Conservation Act and Great Lakes Restoration Initiative.

This interview was conducted by the National Shooting Sports Foundation.