In America, you would be hard-pressed to find a more magnificent collection of fine shotguns than at the Safari Club International Convention, held this year during the first week of February at the Mandalay Bay Convention Center in Las Vegas. One of our perennial favorites there is Austrian, Peter Hofer. Mr. Hofer specializes in drilling shotguns that include rifle barrels in a brilliant display of artisanal workmanship befitting royalty. At the 2017 SCI convention, he unveiled his latest creation, “The Peter Hofer Special Double Shotgun with Hidden 17 Hornet Rifle Barrel.” We asked him to explain the intricacies of designing and building it.

Concentrated technology in the smallest of spaces is an extreme example of the greatest art of gunmaking. I have been making the Peter Hofer Special Double Shotgun drilling in 12, 20 and 28 bore with hidden rifle barrel in caliber in 17 HMR or 17 Hornet caliber. Now my newest model in .410 bore represents an extreme example of diminution.

The Peter Hofer Special Double Shotgun in .410/17 Hornet/HMR, with a weight of 2.5 kg (5½ pounds) I believe represents a world record in light weight which will be difficult for anyone else to beat.

An action had to be developed that was smaller and lighter than a standard .410 shotgun. This reduced action is packed with a huge amount of additional technology, such as a third interior lock, single trigger and separated ejectors for the shotgun barrels, set trigger and separate extractor for the hidden rifle barrel, and last but not least the additional rifle barrel hidden under the rib between the shotgun barrels. 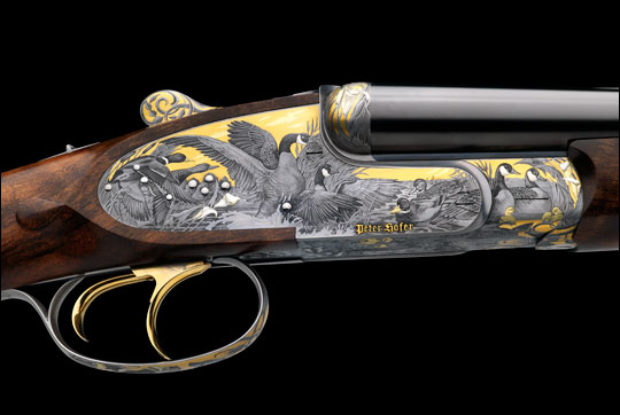 The additional technology and that of the double shotgun with side lock had to be assembled perfectly like clockwork in a very reduced action and the smallest of spaces to guarantee a perfect functioning over several generations.

Thanks to this breathtaking weight reduction with a total weight of 2.5 kg, I was able to achieve the handling characteristics of a pure side-by-side .410 shotgun, but in fact, the magic of the gun is that it is a drilling .410/17 Hornet/HMR.

It is not possible to suspend the laws of physics and mechanics. What I find is that the limits of the technically feasible do not lie in big and bigger but in small and smaller. I believe that I have proved that The Peter Hofer Special Double Shotgun in .410/17 Hornet/HMR proves how far the limits can go in sophistication and technical inventiveness for drilling guns.

With the advent of the powerful 17 HMR bullet it was possible to build this extraordinary double shotgun. The advantage of this fast, high-performance caliber is that it requires an external barrel diameter of only 6.5mm (0.255906 inches). Due to the fact that I placed the rifle barrel under the shotgun rib, this special shotgun, with regard to its weight, balance and measurement, does not differ from a pure shotgun despite the third barrel and additional technology. This is precisely what makes this newly developed shotgun model so sensational.

The main challenge consisted in building the rifle barrel. Nobody in the world had ever built a rifle barrel with a barrel wall of 1mm (0.0393701 inches). I feel that I have exhausted the limits of the technically feasible to an extent that the small rifle barrel with an outer diameter of 6.5mm required as little space as possible. 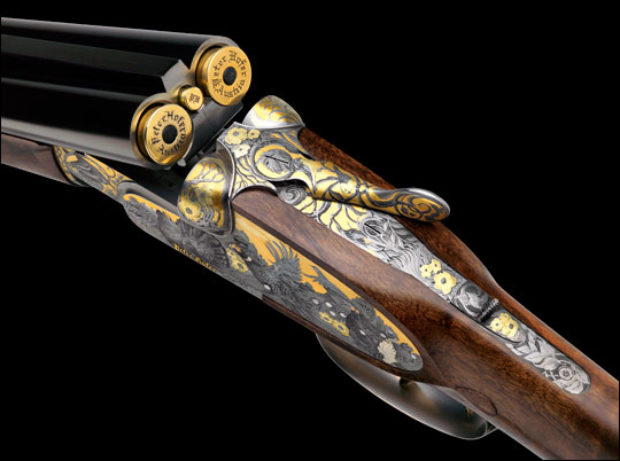 The limits of the technically feasible nearly were surpassed considering the fact that the rifle barrel with a groove depth of 1mm needed to be absolutely straight. With a resting wall thickness of 1mm and a barrel length of 760mm (29.9 inches) one easily recognizes the technical challenges that had to be overcome.

We are talking about dimensions that remind us of a drinking straw. This type of barrel cannot be machined in a lathe as the centrifugal force would easily bend and destroy the barrel in less than one second. In other words, I had to invest a lot of development work in the production of this small barrel in order to obtain a barrel that would meet this high-quality criteria.

As an enthusiastic wildfowl hunter myself, I understand the conditions in the field and understand the range of the typical shotgun. So I know that we may often encounter a fox, a marten, large bird or a cat that are out of our shotgun range.

I tested the 17 HMR at 120 steps from a deer, which I was able to shoot with a neck shot. So I can personally recommend this unique firearm for shooting precisely aimed bullets at 150 meters (492 feet). But the 17 HMR was extended with the introduction of the 17 Hornet, which achieved extraordinary ballistic values. Thanks to V0 =1113 m/s, V200 =865 m/s and a very stretched trajectory this caliber is ideal for predators even at 300 meters (984 feet).

This best-in-class predator bullet is convincing with an aerodynamic design of its polymer tip resulting in an extremely long trajectory. It provides assured accuracy at longest distances and explosive effect against the target, even with an impact speed down to 488m/sec.

The Hornady Superformance Varmint 17 Hornet rifle ammunition delivers bullet velocity that increases of 60 m/s over the 17 HMR. Accuracy, increased range, flatter trajectory, less wind drift and devastating terminal results are all realized with the Hornady Superformance Varmint ammunition. Improved ballistic coefficient and explosive energy transmission are due to the polymer tip, even at low velocities down to 488 m/sec. This caliber is ideal for small predators. 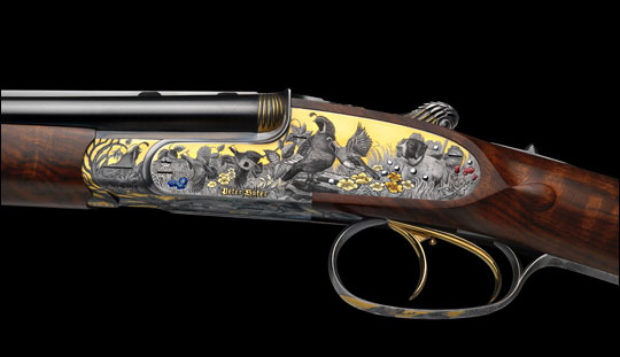 My double trigger system is able to combine the 17 Hornet/HMR with the .410 shotgun barrels. The shotgun barrels are shot with the single front trigger. The rear trigger is equipped with a set trigger for precise rifle shots. The ejectors function perfectly by ejecting only spent shells.

The Peter Hofer Special Double Shotgun in .410/17 Hornet/HMR is built as a shotgun with two sidelocks. In addition there is a third sidelock inside the action which I developed especially for this shotgun. 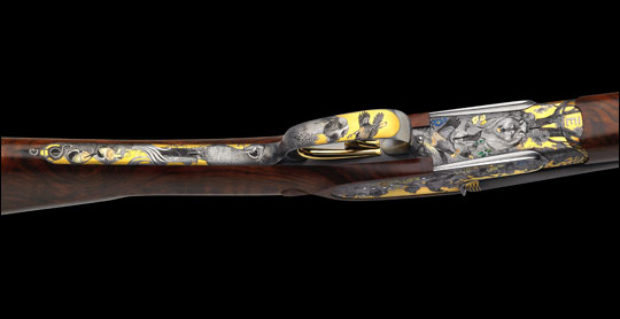 The shotgun barrels each have an ejector. In addition to the two perfectly integrated ejectors there is a separate extractor for the rifle barrel. When a traditional shotgun with sidelocks is built to be slender, there is very little space left inside. This new sidelock drilling is so stuffed inside with technical parts that there is absolutely no space left. You would have to try out this technical wonder to see for yourself how perfectly it functions.

The Peter Hofer Special Double Shotgun drilling is available in 12, 16, 20 and 28 bores and the new .410. A self-opener mechanism is optional.

Peter Hofer, born in 1958, studied at the Institute for Higher Technical Studies in Metalwork and Weapons Manufacturing. In 1986 he founded his own company. International success and prominent clients provided great scope for artistic creativity in the design of exclusive sporting guns. Awards and exhibitions all over Europe, Asia, the Middle East, the USA and Russia and the Ukraine have led to rapid development, continuous expansion and new company locations. The unique creations that leave the workshop are all handcrafted by Peter Hofer, some even taking up to 12 years.