The Cold War saw many interesting firearms designs, but few are as unique as the Polish PM-63, now available in the semi-auto Pioneer Arms PM-63C pistol.

Some firearms have a utilitarian look; some can be classified as beautiful; some look plain vanilla; and some firearms are flat out odd-looking. The PM-63 falls right into this last category of very odd-looking firearms.

Nevertheless, although it might look pretty weird, it’s a very well-thought-out design, and it reflects solid build quality for that era, especially for a Combloc weapon. But the select-fire PM-63 has been out of the reach of most Americans … until now. Thanks to Pioneer Arms, it’s been redesigned as the PM-63C—a civilian-legal, semi-auto pistol.

The original PM-63 is a Polish-designed submachine gun (SMG) that’s blowback operated, hammer-fired and select-fire, with a full-auto rate of fire of 650 rounds per minute. It’s chambered in 9x18mm Makarov.

Officially named the “Pistolet Maszynowy wzor 1963” (PM Model 1963), it’s often referred to as the PM-63 RAK. It’s one of the first SMGs to incorporate the magazine well into the pistol grip, following in the footsteps of the Czechoslovakian Sa Vz 48 (aka Sa 23/24/25/26 Series) and the Israeli Uzi. 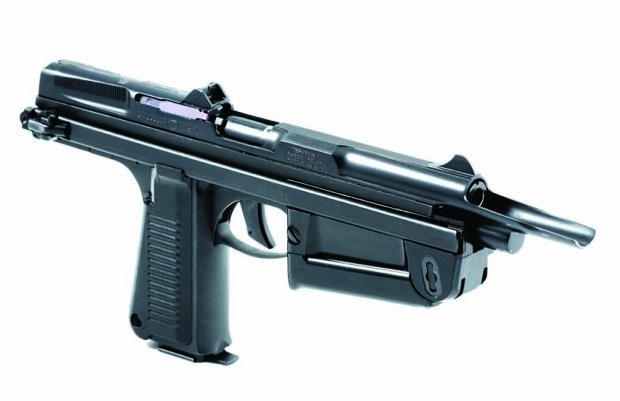 To retain pistol status with the ATF, the folding stock has been spot-welded in place, and the foregrip is permanently fixed and cannot be opened to a vertical grip.

Development started in the late 1950s by Piotr Wilniewczyc, who died in 1960, before development was complete. A team from the state-owned factory completed development, and the PM-63 was adopted into Polish military and police service in 1965. Around 80,000 were made until production stopped in 1977. It would continue on in service until it was replaced in 1984 by the PM-84 Glauberyt. During its service life, the PM-63 was adopted for use by 13 different countries and fought in 12 different wars or conflicts.

The PM-63 is unique. It’s essentially a pistol/SMG hybrid. Where most SMGs are distinctly different designs than handguns, the PM-63 looks as if it started life as a handgun and was then half morphed into an SMG. What makes it so different is that SMGs typically have an upper receiver and a reciprocating internal bolt. The PM-63 doesn’t; it uses a traditional pistol slide assembly (slide, barrel, recoil spring, guide rod).

Another unique feature is the shovel-looking protrusion in front of the barrel. It’s a muzzle compensator that directs gasses up, forcing the muzzle down, thus helping make the gun more controllable in full auto. It also makes for a great, one-handed cocking mechanism—although I don’t recommend using it unless it’s for an emergency, because using it would mean pressing the muzzle of a loaded gun into an object you could potentially destroy.

Then, there’s the monstrosity in front of the trigger guard, which is a front grip. It can be used as a grip when folded or can be opened to be used as a vertical grip. Cleverly tucked away is a folding shoulder stock made of stamped steel. It closes by sliding forward, with the arm resting firmly against the receiver and the butt folded up, nestled in a cut in the rear of the receiver.

The relatively heavy weight of the gun, the compensator and the shoulder stock—combined with the mild-recoiling 9x18mm Makarov cartridge—make the PM-63 easy to shoot, even on full auto. To further enhance shooting, there’s an inertia buffer inside the rear of the slide that reduces the rate of fire from around 850 rounds per minute to 650. 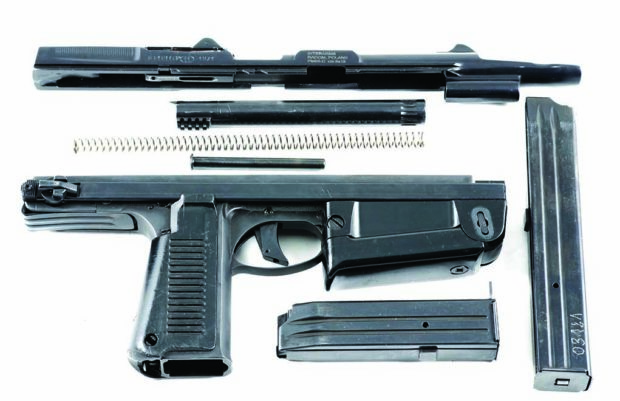 The mag release is located in the customary position used by European handguns of this era (the bottom of the grip/mag well). However, it’s better than most grip-bottom designs, because the release lever is thumbed toward the magazine instead of away from it, which is more awkward.

The rear sight incorporates an L-shaped flip sight with one side marked for 75 meters and the other for 150 meters. The front sight is blade-styled and machined into the slide. Despite the long overall length of the gun, the sight radius is only 6 inches (about the same as a Glock G19 compact pistol). The sights are pretty good for circa 1959, but by modern standards, they’re not very functional.

What do you do when you find in your inventory guns that were produced for the military market, but they’re now obsolete? You do what Pioneer Arms Corp. did: You remanufacture them into a civilian-legal version for the U.S. civilian market.

U.S. gun owners and collectors can now purchase a semi-auto-only version called the PM-63C. The only downside? There will only ever be 650 of them – because only 650 are in existence. 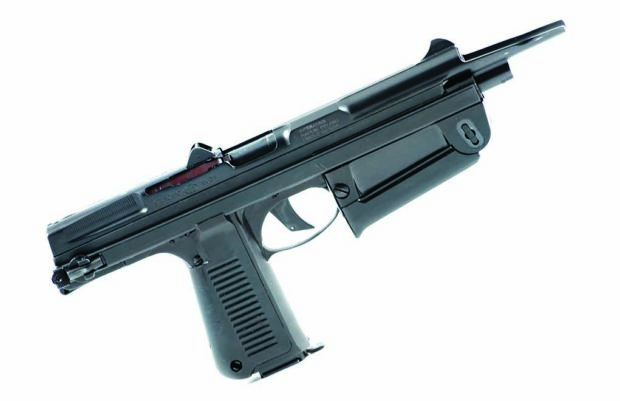 The PM-63C looks odd, thanks, in part, to this large monstrosity in front of the trigger well. It’s a forward grip that has been permanently fixed into the folded position, per ATF rules. In the original select-fire version, the grip can be opened into a vertical grip.

There are four key differences between the original PM-63 and the civilian-legal PM-63C. First, and most obviously, it’s been remanufactured to shoot semi-auto-only. Second, to meet ATF requirements to qualify as “not a machine gun,” it fires from a “closed bolt”—or, in this instance, a closed slide. Third, to meet the ATF requirements for a pistol and not a short-barreled rifle (SBR), the folding shoulder stock has been bead-welded in the “closed” position so that it can’t be extended. Fourth—also to meet ATF requirements—the front grip is fixed in place so it can’t be unfolded into the vertical grip.

Markings include the original PM-63 stamping (on the right side of the slide) of the serial number: the circle-11 logo and “1971,” for the year of manufacture. Forward of that is the marking of the remanufacturing company (“INTERARMS, RADOM, POLAND, PM63-C cal 9×18”). On top of the slide and behind the rear sight is the mark of the importer, PAC’s U.S. subsidiary (“PIONEER ARMS CORP., FORT ORANGE, FL”). Just behind that is PAC’s archer (“Łucznik”) logo and “RADOM”, “POLAND” and an “11.”

PM-63C pistols can be purchased from PAC’s distributer, Classic Firearms, and includes the original-issue canvas holster, two magazines (one 15-round, one 25-round) and cleaning kit.

The PM-63C is an interesting gun, but the biggest question I had was about reliability: It’s a difficult task to take a gun designed to be fired open-bolt and convert it to reliably fire from a closed bolt. It’s one thing to design a semi-auto version from the ground up, as with many MAC-11-style guns, but to convert an actual “already-made” military surplus gun is something different. 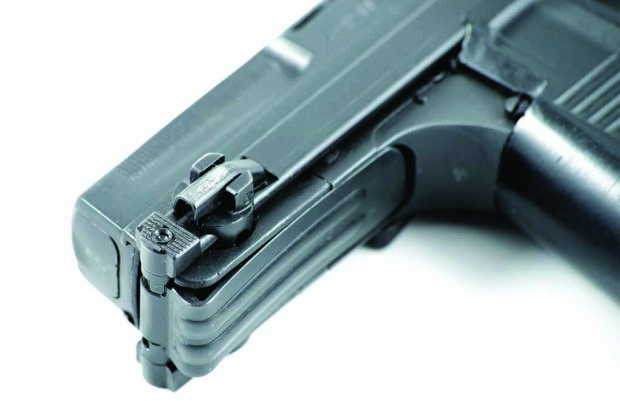 If this were the original select-fire PM-63, pressing the lever would allow the shooter to pull the shoulder stock to the rear. On this PM-63C, the lever still works. However, the stock bar has been welded in place.

If you’ve ever pulled the trigger on a Combloc handgun, it’s like pulling a brick through a garden hose! However, my PM-63C is very different from that; it’s good … maybe even very good. It’s long, but grit-free and surprisingly light, and it averages a pull rate between 4.0 and 4.3 pounds. It’s pretty smooth, with a clean break and a short reset.

For me, reliability isn’t a big concern with a gun such as this. I’m not buying it to perform flawlessly, and it will never be used for self-defense. I have other guns for that. I’m buying it because it’s unique, and it’s a piece of Cold War history.

With that said, reliability was … okay. I didn’t put a ton of lead downrange (again, I’m not testing it in order to use it as a carry gun). In total, out of the 60 rounds I fired, I had 11 feed malfunctions. In all cases, the fresh round was about halfway into the chamber, and the slide just couldn’t push it in all the way. I believe a stouter recoil spring would resolve the issue.

The PM-63C ranks pretty high in the “most-interesting” firearms category. Because I’m a history buff and gun collector, one of the genres/topics I’m most interested in is the Combloc/Eastern Europe. When both history and guns are combined, it’s tough for me to say “no.” And for the PM-63C, I wasn’t able to!

I paid $1,300 through Pioneer Arms’ distributer, Classic Firearms. Some might scoff at the price (“I can get a nice AR for that price!” is the popular refrain), but all my gun-purchase regrets are the guns I didn’t purchase (usually, because I thought the price was too high). For me, $1,300 is higher than I want to pay, but with only 650 of these PM-63Cs in existence, it’s likely the value will go up. I can’t guarantee that it will, but I can guarantee that either way, I’ll probably never get another chance to purchase one.

The article originally appeared in Gun Digest the Magazine.