An image shared on Facebook purportedly shows a CNN article reporting President Joe Biden threatened to cancel “all U.S. visas to be issued in the Philippines.” 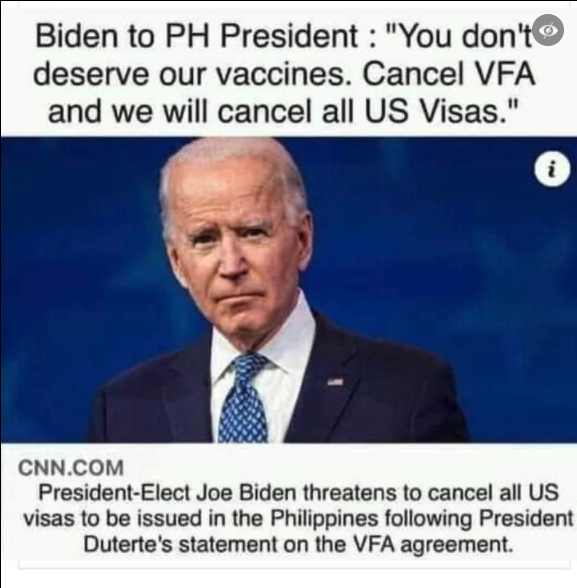 CNN has not published an article reporting Biden threatened to “cancel all US visas to be issued in the Philippines.” There is no evidence that Biden said the quote attributed to him in the post.

Multiple Facebook users have shared screen grabs of what appears to be a CNN article that puts up the headline: “President-Elect Joe Biden threatens to cancel all US visas to be issued in the Philippines following President Duterte’s statement on the VFA agreement.” It also quotes Biden as saying, “You don’t deserve our vaccines. Cancel VFA and we will cancel all US Visas.”

Philippine President Rodrigo Duterte in February 2020 announced the termination of the Visiting Forces Agreement (VFA) with the U.S., though the withdrawal has been extended twice, Reuters reported. The VFA “governs the legal status of U.S. military forces operating in the Philippines and establishes rules by which U.S. troops, vessels and aircraft may enter the country,” according to a Congressional Research Service report. Last month, Duterte said the U.S. has “to pay” to keep the VFA, Reuters reported.

There is no record of CNN publishing the pictured article. Nor is there any evidence Biden made the statement or threat attributed to him in the Facebook post.

Check Your Fact didn’t find the alleged quote or threat about visas in presidential actions, press releases or transcripts published on the White House website. They also do not appear in Biden’s social media posts or in Factba.se’s collection of his public statements.

A keyword search of CNN’s website, as well as its Facebook and Twitter accounts, turned up no matches for the supposed article. Other major media outlets likewise do not appear to have reported that Biden threatened to “cancel all US visas to be issued in the Philippines.” CNN spokesperson Bridget Leininger confirmed in an email to Check Your Fact that the image is “all fake.”

The fabricated CNN article appears to be a doctored screen grab of a real CNN story posted on Facebook that has been altered to make it seem like the outlet reported such a thing. CNN has posted articles with the same featured image of Biden on at least two occasions.

The U.S. and the Philippines had discussions on the future of the VFA in February, according to Rappler.