The Washington Post corrected a 15-month-old headline that claimed the theory of COVID-19 originating from a lab in Wuhan was “already debunked.”

The correction appears to have been made over the weekend, shortly after the Daily Caller reached out to the Post seeking comment on the headline, given the increased interest in the possibility that COVID-19 had in fact originated from the Wuhan lab that was studying bat-borne coronaviruses.

The Post’s original headline from Feb. 17, 2020, read, “Tom Cotton keeps repeating a coronavirus conspiracy theory that was already debunked.” Republican Arkansas Sen. Tom Cotton had appeared on Fox News’s “Sunday Morning Futures” with Maria Bartiromo and pointed to the Wuhan Institute of Virology as a potential origin of the disease. 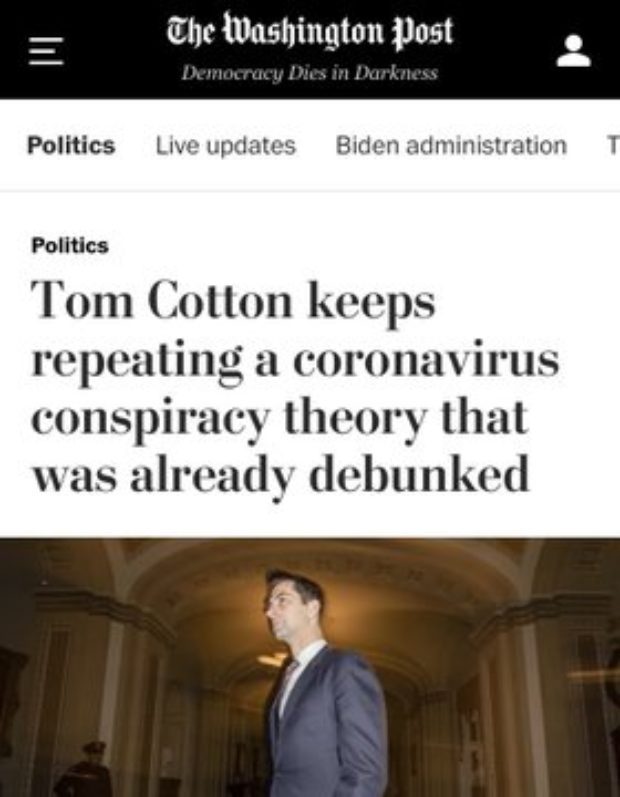 The original headline from February 2020 claiming the lab leak theory was “already debunked.”

The headline was updated to read, “Tom Cotton keeps repeating a coronavirus fringe theory that scientists have disputed,” along with a correction that said the Post’s use of the words “debunked” and “conspiracy theory” have “been removed because, then as now, there was no determination about the origins of the virus.” 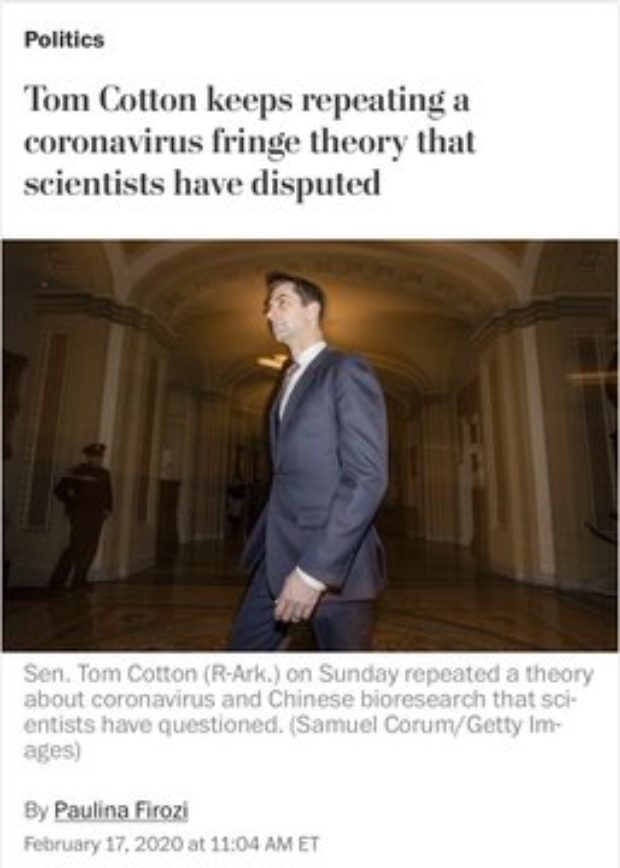 The move by The Washington Post is one of many corrections media outlets have made to stories from early in the pandemic that declared the COVID-19 lab leak theory to be a conspiracy theory.

Politifact also recently retracted a “pants on fire” fact check from September 2020 that called a Hong Kong virologist’s claim that COVID-19 was a lab-created virus a “debunked conspiracy theory.”

Several facts have pointed to the possibility of a COVID-19 lab leak since early 2020, but were either downplayed or outright ignored by media outlets. (‘Debunked Bunkum’: Poorly-Aging Highlight Reel Shows Trump Critics Mocking Lab-Leak Theory)

Prominent virologist and Rutgers University professor of chemical biology Richard H. Ebright also said publicly in February 2020 that the hypothesis “cannot – and should not –be dismissed.”

After having previously shut down a Trump-era State Department inquiry into whether the coronavirus could have originated in a lab, President Joe Biden recently gave his intelligence agencies 90 days to conduct a review into the origins of the disease.