Obama’s party is scheduled to have up to 500 guests and more than 200 staff and has faced criticism from some over COVID-19 concerns. The party will have a “COVID-coordinator” to mitigate risk of outbreaks from the large gathering, and all attendees are encouraged to be vaccinated and are required to get tested, according to Axios. (RELATED: Biden Says He Wants Mandates For Vaccines Throughout The Nation)

“While President Biden is unable to attend this weekend, he looks forward to catching up with former President Obama soon and properly welcoming him into the over-sixty club,” the White House told Axios in a statement. 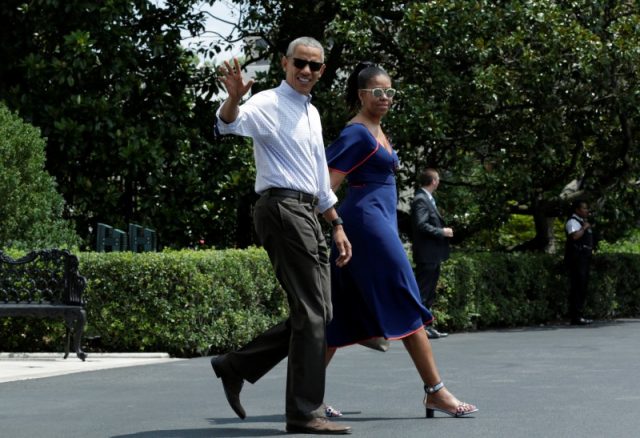 U.S. President Barack Obama waves to reporters as he walks out with First lady Michelle Obama from the White House in Washington, U.S. August 6, 2016 before departure for their summer vacation in Martha’s Vineyard, Massachusetts. (REUTERS/Yuri Gripas)

The Obamas will host their hundreds of guests at their oceanfront mansion, and Pearl Jam is scheduled to perform at the event.

The Centers for Disease Control and Prevention (CDC) announced in late July that even vaccinated Americans should wear masks while indoors in certain high risk areas, a reversal of its previous mask guidance. Martha’s Vineyard does not currently meet the criteria for “high risk” area, however.

The CDC based its updated guidance on a study finding that vaccinated people can contract and spread COVID-19 and the delta variant in some situations, though their cases are less severe than for those who have not been vaccinated. The study group came out of Provincetown, Massachusetts, which sits roughly 60 miles north of Martha’s Vineyard.

Some medical experts have warned against hosting large gatherings under current circumstances, with National Institutes of Health Director Francis Collins telling Americans to use “common sense.”

“If you’re talking about a small party like I might have at my house for six or eight people who are all fully vaccinated, I do not believe, at this point, we need to put masks on to be next to each other,” Collins told CNN on Sunday.

“But if there were 100 people, and, of course, how are you really going to be sure about people’s vaccination status?” he said. “Then the dynamic changes a little bit. There will be some need for common sense there.”