Deborah Rodriguez, cofounder of a beauty school in Afghanistan, is desperately trying to get her staff out of the country.

“The fear is that there’s going to be repercussions from people telling on them, ‘oh, you know she was at the beauty school’ or you know like if they ever had any enemies or ‘she was a hairdresser,'” Rodriguez told the Daily Caller News Foundation Friday.

The Taliban has put many vulnerable women and their families at risk, and the group has been hunting down women who worked in beauty shops, Rodriquez said.

“Basically, they never did like hairdressers,” Rodriguez said. “They just thought that you can doll yourself up for your husband, but that’s it, not for parties … So it kind of stands for something that they’re opposed to. That’s one big problem.”

Rodriguez’ beauty school has been a beacon of opportunity for hundreds of women in Afghanistan. The training Rodriguez provided to so many young women has given them their livelihoods, but now that’s all gone with the Taliban’s control of the country.

Rodriguez is currently working to get about 80 people, including her staff and their families, out of Afghanistan.

“You know, finger nail polish, that was always one big issue for the Taliban,” she added.

The women have lost their rights and their livelihoods and many of them are in hiding. (RELATED: Oklahoma Woman Aided In The Evacuation Of 10 Girls On The Afghanistan All-Girls Robotics Team)

The salon offered over 200 women the opportunity to start their own business and to provide for their families. 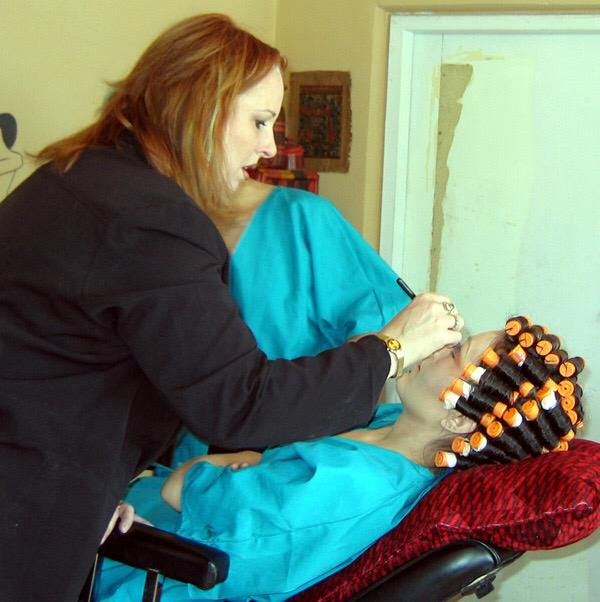 “It was so wonderful because we trained over 200 women and a lot of these girls went on to train their own children,” Rodriguez said. “So this is like families of hairdressers. It empowered them to be able to feed their family, to put their children through school, it gave them a way to always know that their family was going to be taken care of.”

Many of the women Rodriguez trained went on to open their own salons where they would do party hair and makeup.

“It’s huge money in Afghanistan … Back when I was there, I think the average wedding hair and makeup like for the bride was about $200. That is more than what was a monthly salary. It was good money,” Rodriguez said.

“It was a really good income and now it’s gone,” she added.

The women who were once proud to have their autonomy are now hiding in crippling fear, Rodriguez said. A woman whose husband was taken by the Taliban in recent months and later freed is in hiding and other families have gone to relatives’ homes to escape areas heavily controlled by the Taliban, according to Rodriguez.

“But they didn’t feel scared to be who they were and now they know that the Taliban know that they were hairdressers and who they are and know where their business was,” Rodriguez said. “So everybody is just not moving, nobody’s doing anything right now.”

Rodriguez has been working day and night from her home outside of the country that she now describes as a “war room” to get her staff and their families out of the country as the Taliban threatens their lives. She’s been able to get some of the women on evacuation lists “but nothing’s confirmed if they’ll actually get a flight out,” she said.

Some of the women have attempted to go to the Kabul Airport, where the U.S. and others are evacuating citizens and visa holders, but they’ve been met with dangerous Taliban checkpoints and chaotic crowds.

“The Taliban has secured the perimeter of the airport so you have to go through Taliban checkpoints,” Rodriguez said. “But just the whole checkpoint is full of people, there’s so many people there … Everybody’s trying to get a flight, whether they have papers or not, papers or whatever and so then there’s other security checkpoints.”

“Even if they’re on a list, it’s hard to get out,” she explained.

One woman that Rodriguez got on an evacuation list was able to get past the Taliban and the chaotic crowd, but couldn’t get past the U.S. military to make her flight. Rodriguez said that the woman had the proper documentation, including a visa to enter the airport, and was instructed by the U.S. Embassy to come to the airport.

“So it’s very very insane now,” she explained. “Even if they’re on a list, they all need to have a secured pickup because it’s so insane to get to the airport now.”

“The airport situation is very difficult right now,” she added.

Generic visas the U.S. State Department disseminated  to thousands of applicants have been copied and reprinted throughout Kabul, creating confusion for those trying to escape, including the woman Rodriguez knew on the evacuation list.

“But now they’re printing these up all over Kabul so now everybody has these because they didn’t have a name on them, they were a piece of paper. And so our military said, ‘ma’am, do you have a green card? Do you have a passport?’ she said, ‘No, I’m Afghan, I was told to come to the airport now as soon as possible, I’m here,’ and they said ‘nope sorry go home,'” Rodriguez said.

Later Friday, Rodriguez said that a family made it through their gate but their son did not and that the family was in a state of panic. The family had been at the airport for over 24 hours, she said.

“I can’t even feel discouraged because I gotta keep plugging forward,” Rodriguez said. “You know, and right now my big thing is I have a nonprofit and so we’re just raising as much money as we can so if we have to supplement some of these we can. The big thing is to help them with their resettlement because we don’t know where they’re gonna be.”

She concluded, “I have to just keep plugging away and not be discouraged and know that every two steps forward I might get four steps back and I just am waiting for that phone call to say, ‘Ok, there’s four out.’ I’ll breathe a sigh of relief … I’ve got to remain hopeful.”