Loudoun County Public Schools (LCPS) is requiring parents to sign a form comparable to a non-disclosure agreement (NDA) to view a portion of the district’s new curriculum inspired by critical race theory, according to documents reviewed by the Daily Caller.

As part of LCPS’ broader equity agenda, the district spent approximately $7,700 to become a “licensed user” of Second Step Programs, a branch of the left-leaning non-profit organization Committee for Children. According to a copy of the NDA-style form reviewed by the Daily Caller, “eligible parents” at LCPS must sign the document to view the Second Step curriculum.

Curriculum presentations can only be given in person and parents cannot broadcast, download, photograph, or record “in any manner whatsoever.” Downloadable files of part of the curriculum are available on LCPS’ website, per Second Step’s copyright policy.

“I understand that the Authorized Presentation of Second Step Materials I am about to view is not a public event, and that copying, broadcast or recording of any kind is not permitted,” the form reads. “I agree to comply with the terms of the above Special License.” 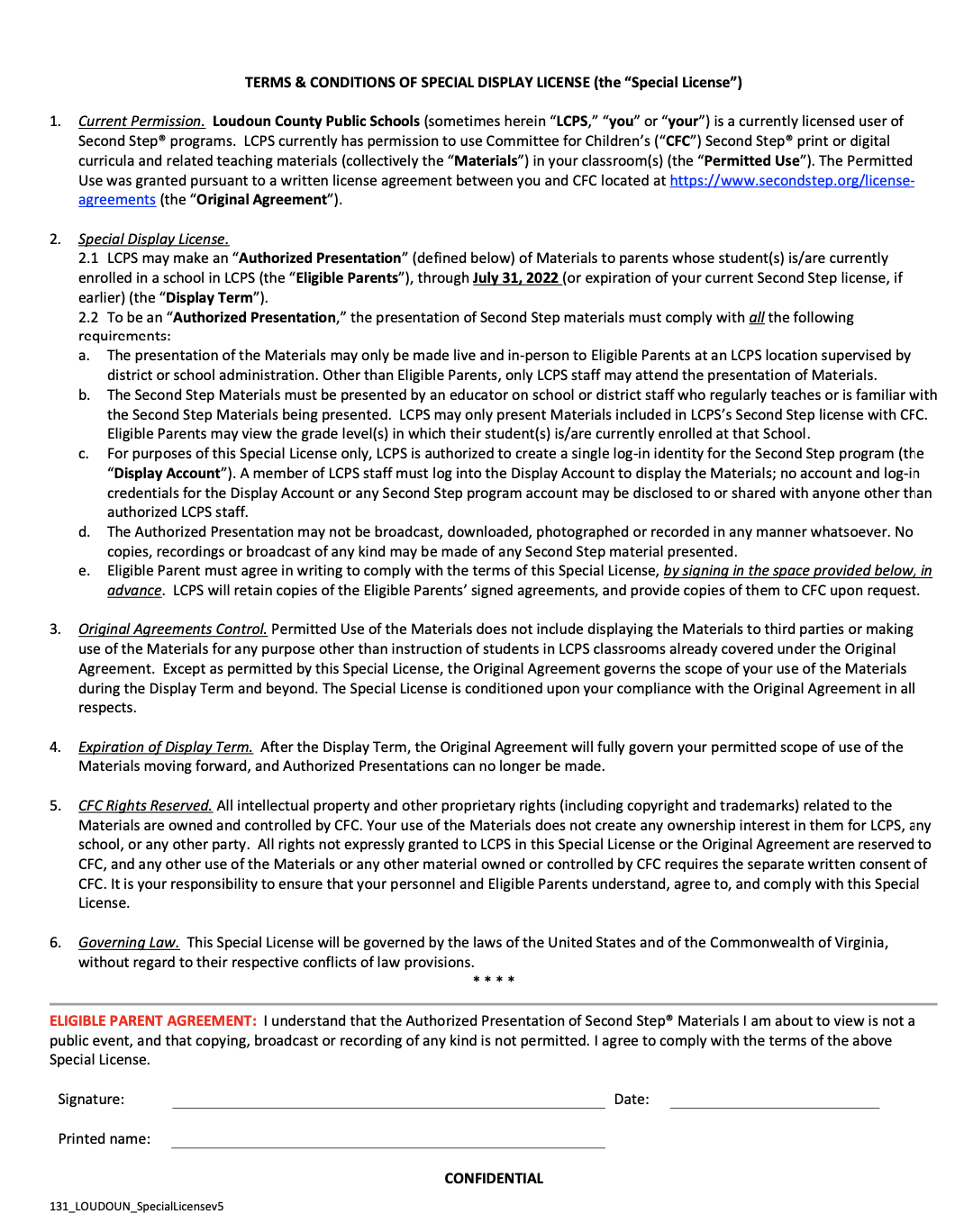 According to the district’s agreement with Second Step obtained by the Daily Caller, the curriculum is not subject to traditional Virginia Freedom of Information Act (FOIA) laws.

“LCPS is partners with Southern Poverty Law Center, Racial Equity Tools, and Learning for Justice (SPLC), all of which have copyrighted material, however, LCPS freely provides access to these materials,” Mineo said. “Why is there such a double standard when parents want to review Second Step SEL material in its entirety?”

Second Step’s programming revolves around the concept of “social-emotional learning,” which is linked to the core tenets of critical race theory. According to Committee for Children, the non-profit behind Second Step curriculum, SEL is “fundamental to achieving social justice.”

“When we all use the same words — for emotions, situations, and behavioral dynamics — it promotes empathy and understanding between students, teachers, staff, parents, and the community,” the curriculum reads. “Second Step provides a shared emotional vocabulary that can create lasting systemic change.”

Second Step curriculum borrows from Learning for Justice, the education arm of the left-wing Southern Poverty Law Center (SPLC) as well. In July 2020, an LCPS spokesman told the Washington Free Beacon that Learning for Justice resources would be “optional” in the district.

According to a newly released PowerPoint from LCPS, the district will require all elementary schools to implement SEL in the classroom by 2022. Images in the PowerPoint link directly to Second Step curriculum. The Virginia Department of Education (VDOE) has also been working to institute SEL into the curriculum state-wide. (RELATED: Virginia’s Department Of Education Wants To Institute ‘Social-Emotional Learning’ State-Wide)

Parents in Loudoun County are worried about the new curriculum as SEL emphasizes the moral, ethical and emotional development of students over their academic success. The push for such a curriculum led the VDOE to explore ending advanced degrees, according to Fox News.

A Utah music teacher, who resigned his position with Draper Park Middle School after being required to teach Second Step’s SEL programming, gives the public a brief insight into the curriculum. Teacher Sam Crowly said in his resignation that he could not “in good conscience” present material that “teaches students that their parents are ‘roadblocks’ to their goals; material which contains propaganda, and encourages students to become activists.”

Second Step Program did not respond to the Daily Caller’s request for comments.