In 1991 the Italian firm Benelli launched what was then, and arguably still is, the most advanced sporting shotgun ever made. The Super Black Eagle (SBE) was the first semi-automatic to cycle 2¾-, 3- and the then-new 3½-inch magnum 12-gauge shell in any order without adjustment. It did this via its revolutionary ARMI inertia action that basically uses the gun’s recoil to cycle the entire gun around its floating bolt. In addition to being simple and self-regulating, the system proved fast, efficient and reliable because the gun expelled carbon and grime out its barrel rather than cycling it back through gas ports. Added to the SBE’s stellar action, the gun around it was versatile, ergonomic, lightweight and intuitive to shoot. It quickly gained cult status.

Since then Benelli has launched multiple iterations of the SBE, SBEII and SBE3—all of which included tangible upgrades for hunters—but none of which were offered in anything other than 12-gauge. That changed in 2021.

Essentially Benelli’s new SBE3 20-gauge is a scaled-down clone of the 12. Where the 12 weighs just 6.9 pounds, the 20 weighs a feathery 5.8 pounds. The only difference is that its ejection port is smaller because there is no need for it to handle 3½-inch shells, because 20-gauge 3½-inch shells don’t exist.

At this point savvy readers might ask: “What’s the point if other great Benelli 20-gauges like the M2 Super 90 and Montefeltro models already exist?” It’s a reasonable question that I’ll attempt to answer.

Other than aesthetic differences, the SBE3 differs from the wood-stocked Montefeltro and the Super 90 in that it features Benelli’s most advanced recoil mitigation system, the Comfort Tech 3, which works by way of recoil impulse-slowing rubber chevrons and a leaf-spring-like cushion dubbed Combtech, under an already cushy cheekpiece. 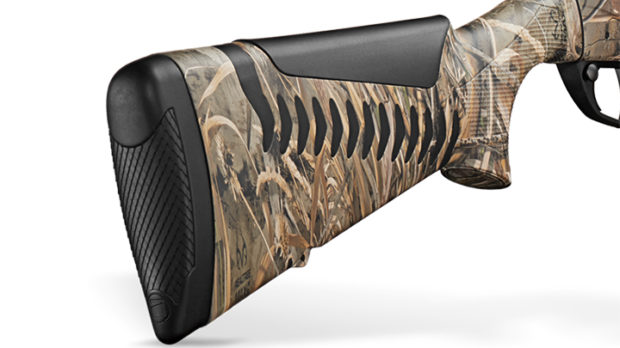 If you’re thinking, “Who needs recoil mitigation on a 20-gauge?” then you’ve just stumbled upon a second reason for this gun’s existence. You see, waterfowl and turkey ammunition has advanced so much in the last few years with the proliferation of Tungsten (Federal’s TSS, etc.) and other nontoxic, heavier-than-lead loads, that a 20-gauge is now a viable option—not just a stunt—for serious turkey and waterfowl hunting. And while these smaller-payload shells deliver less recoil than their 12-gauge counterparts, when fired in a lighter-weight 20-gauge gun, much of that recoil mitigation is lost. So Benelli countered by offering a 20-gauge SBE3 with all the kick-cushioning tricks in its bag so hunters can have an ultra-lightweight gun for upland bird hunting yet also use it for turkeys and ducks without unduly punishing the shooter.

But there’s more to this new SBE than recoil mitigation. Over the years, the SBE line has become a status symbol in duck blinds across the country. The 20-gauge offers that panache but does so in an all-around smaller package, and one that retains the reasons the SBE gained favor among serious hunters in the first place; namely, it performs in icy weather, a grimy dove field or after it’s been neglected for a year.

The 20-gauge SBE3 features a 26- or 28-inch Crio-treated, stepped vent-rib barrel with a fiber-optic front sight just like its daddy. It comes with five choke tubes including the basics—IC, M and F—along with two I use most: cylinder (it’s hell on quail) and an improved modified choke that’s ideal for long-range doves and ducks.

This gun features oversized controls for easy manipulation with winter gloves. A Benelli-trademark magazine cut-off/shell-release button allows swapping a chambered shell without having to cycle all of them through the action. Its stock is adjustable for drop-at-comb via an included shim kit, while three various-length recoil pads can be purchased separately to adjust length of pull. 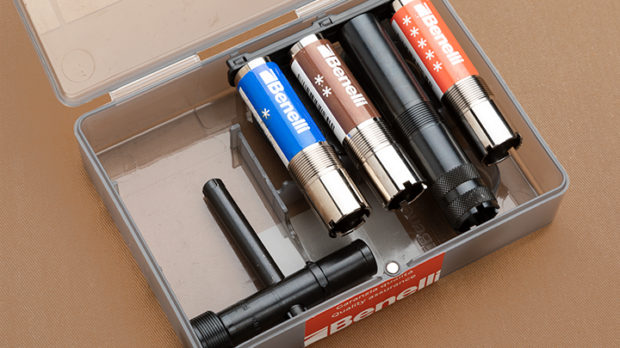 During testing it became readily apparent that this SBE3 20-gauge is among the lightest and softest-recoiling shotguns ever produced, perhaps only rivaled by a couple heavier gas-action 20-gauges and Benelli’s own 28-gauge Montefeltro. Thanks to its Comfort Tech 3 system, the gun, when fired with the lightest, ⅞-ounce target loads, is a wimp. I took the time to choose the shim kit best suited to me so that it fit me perfectly, a trait that allows me to relax, pull up the gun naturally and bust targets without much thought. In testing I experienced two malfunctions, but both were during the break-in period.

I noticed a couple of things about this sub-gauge SBE that would make it the perfect choice for high-volume wing shooting like that found in Argentina: It features a new beveled loading port and slightly redesigned gate that makes loading silkier and less likely to pinch the fingers. This was a flaw on the first SBE, and while this complaint may seem rather elitist, you’ll notice it if you ever shoot 1,000 rounds straight. For hunts more domestic, its new rotating bolt head locks into the barrel extension with less effort, so you’ll be less likely to hear the infamous Benelli click if you ride the bolt home in an attempt to load the gun silently while turkey hunting. 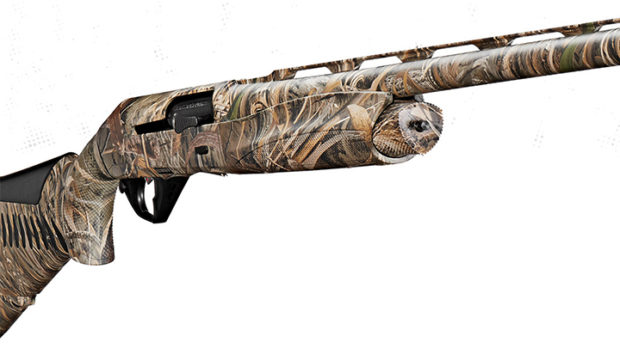 Frankly, I struggled to find a technical flaw with Benelli’s new 20, but for its price I think it should come standard with three or more various-sized recoil pads so your child could grow with the gun. While I realize a $1,600 shotgun may be rich for a young hunter, for those looking for the best and mildest-kicking shotgun for a protege, this is likely it. It’s also wonderful for females and smaller-statured hunters who may not love the bulk and bite of a 12-gauge. But just because this SBE is chambered in 20 doesn’t imply it’s not a man’s shotgun. When hunting doves, quail and Western game birds like chukar and huns, I prefer the best and lightest semi-auto I can carry. To that end, Benelli has done it again.