Two subordinates of Dr. Anthony Fauci raised concerns in May 2016 that a taxpayer-funded grant may include gain-of-function experiments on bat coronaviruses at a Wuhan lab, but dropped the issue after nonprofit group EcoHealth Alliance downplayed the concerns, documents obtained by the Daily Caller News Foundation show.

National Institute of Allergy and Infectious Diseases (NIAID) staffers Jenny Greer and Erik Stemmy told EcoHealth in a May 28, 2016, letter that a proposed grant “may include” gain of function research, according to documents obtained through a White Coat Waste Project information request.

The letter requested EcoHealth provide its own “determination” as to whether its proposed experiments in Wuhan included gain of function research.

EcoHealth President Peter Daszak submitted his “determination” to the NIAID in a June 8, 2016 letter that downplayed potential risks associated with his group’s proposed research in Wuhan, which involved the creation of lab-made chimeric coronavirus, and denied it involved gain of function.

The NIAID then gave Daszak the opportunity to submit an amended version of his letter on June 27, 2016, after discovering a factual error in the initial filing, emails show. The agency then used Daszak’s revised letter, which kept the original June 8 filing date, as the basis of its own determination on July 7 that EcoHealth’s research did not involve gain of function. 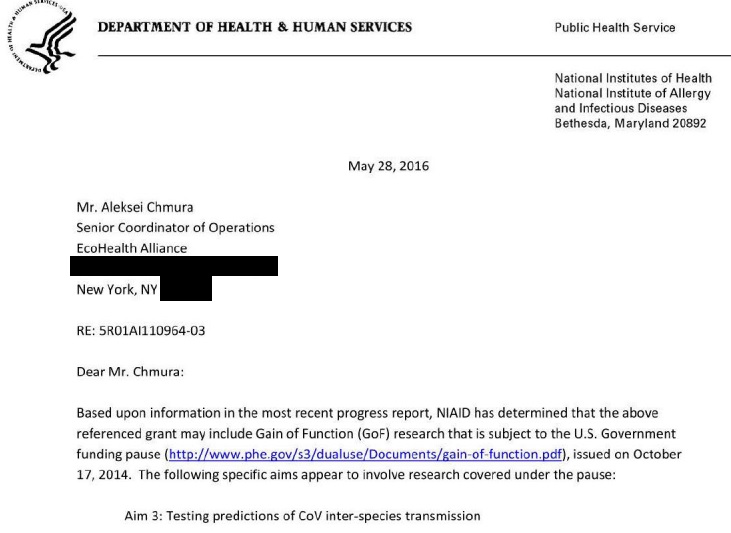 Excerpt of letter NIAID staffers sent to EcoHealth Alliance on May 28, 2016, expressing concern about potential gain-of-function research with the Wuhan Institute of Virology (Screenshot)

Rutgers University Professor Richard Ebright told the DCNF that the NIAID’s May 28, 2016, letter to EcoHealth proves that Fauci was “untruthful in his testimony to Congress” that NIH staff concluded up and down the line that the EcoHealth grant did not include gain of function research.

“The NIH, in effect, delegated to EcoHealth Alliance the authority to determine whether its research was, or was not gain of function research subject to the funding pause, the authority to set criteria for the determination, and the authority to over-ride federal policies implemented by the White House in 2014-2017 and by HHS in 2017-present,” Ebright added.

Daszak’s letter to the NIAID on June 8, 2016, argued that EcoHealth’s proposed experiments in Wuhan were not gain of function in part because the WIV1 bat coronavirus they planned to use as the basis of their lab-made viruses “has never been demonstrated to infect humans or cause human disease.”

But Daszak’s collaborator at UNC Chapel Hill, Ralph Baric, helped publish a study three months prior in March 2016 that found WIV1 had the ability to infect humans. Baric’s study found that the WIV1 virus posed an “ongoing threat” to humans because it “readily replicated efficiently in human airway cultures and in vivo, suggesting capability of direct transmission to humans.”

Daszak also said in his June 8, 2016, letter to the NIAID that he would cease experimentation and notify the agency immediately if EcoHealth’s lab-created viruses in Wuhan were enhanced by over one log, or ten times, compared to the natural strain used to construct it.

Daszak later informed the NIAID staffers in a June 28, 2016, email that he was reliant on Wuhan Institute of Virology researcher Shi Zhengli, who has known ties with the Chinese military, to notify him if their lab-created viruses exhibited enhanced replication.

“You are correct to identify a mistake in our letter,” Daszak said in his email to an NIAID staffer. “UNC has no oversight of the chimera work, all of which will be conducted at the Wuhan Institute of Virology.”

“We will clarify tonight with Prof. Zhengli Shi exactly who will be notified if we see enhanced replication, and then amend and re-send the letter to you so it is clear. I will also confirm with Zhengli the make-up of the Wuhan Institute of Virology’s Institutional Biosafety Committee,” Daszak added. “However, my understanding is that I will be notified straight away, as [Principal Investigator], and that I can then notify you at NIAID.” 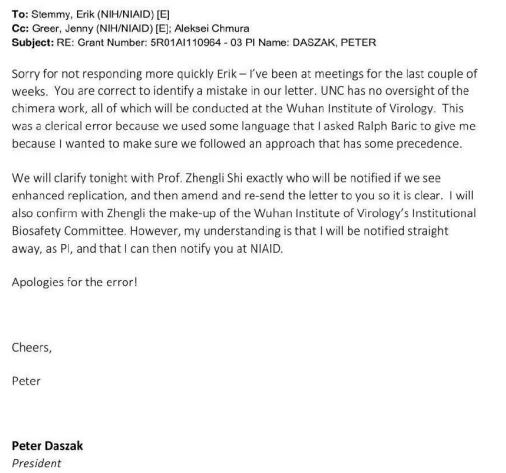 Fauci testified before the Senate in May that he has “no way of guaranteeing” that the Wuhan Institute of Virology did not use the $600,000 in taxpayer dollars it received from his agency to conduct gain of function experiments.

“I do not have any accounting of what the Chinese may have done, and I am fully in favor of any further investigation of what went on in China,” Fauci told the lawmakers. “However, I will repeat again, the NIH and NIAID categorically has not funded gain-of-function research to be conducted in the Wuhan Institute of Virology.”

The NIAID staffers eventually sided with Daszak and informed EcoHealth in a July 7, 2016, letter that their proposed experiments in Wuhan were not subject to the gain of function funding pause.

“NIAID is in agreement that the work proposed under Aim 3 to generate MERS-like or SARS-like chimeric coronaviruses (CoVs) is not subject to the GoF funding pause,” the two staffers wrote in their letter to EcoHealth. The NIAID staffers added that the agency did not expect EcoHealth’s chimeric lab-created viruses would exhibit enhanced pathogenicity in mammals and that Daszak had promised to immediately stop all experiments and notify the NIAID if EcoHealth created a virus in Wuhan with enhanced virus growth over one log.

“This is terrific!” Daszak emailed Greer on July 11, 2016. “We are very happy to hear that our Gain of Function research funding pause has been lifted.” 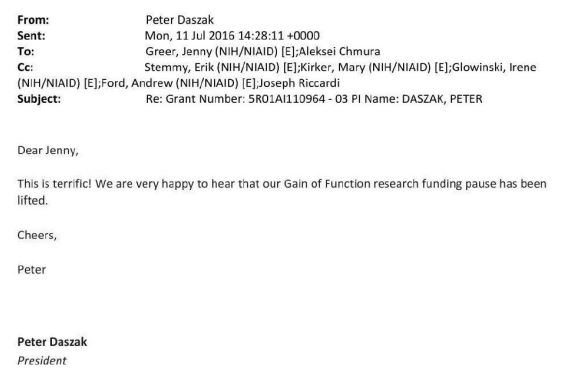 NIH Principal Deputy Director Lawrence Tabak informed lawmakers in late October that Daszak did not stay true to his promise, saying EcoHealth failed to report right away that it created a lab-made SARS coronavirus in Wuhan using the WIV1 backbone that was more deadly and pathogenetic towards mice with humanized cells.

Despite Tabak’s letter, Fauci and the NIH maintain that the research they funded at the Wuhan Institute of Virology did not involve gain of function research. (RELATED: ‘They Have No Shame’: NIH Doubles Down, Says It Didn’t Fund Gain Of Function Research After Releasing Documents That Suggest Otherwise)

Fauci and the NIH also maintain that it is “molecularly impossible” for the viruses that EcoHealth and the Wuhan Institute of Virology were tinkering with to have turned into the virus that causes COVID-19.

“When people talk about gain-of-function, they make that implication which I think is unconscionable to do, to say, ‘Well, maybe that research led to SARS-CoV-2’,” Fauci told ABC’s George Stephanopoulos in October. “You can ask any person of good faith who’s a virologist, and they will tell you, absolutely clearly, that that would be molecularly impossible.”

The letters between NIAID and EcoHealth discussing the potential gain of function research in Wuhan in 2016 were obtained by the White Coat Waste Project as the result of a Freedom of Information Act lawsuit.

The letters were first alluded to by House Energy and Commerce Committee ranking member Rep. Cathy McMorris Rodgers and other top Republican lawmakers in an Oct. 27 letter to NIH Director Francis Collins.

McMorris Rodgers said the NIH allowed committee staffers to review the communications during a private in-person inspection at the Department of Health and Human Services’ headquarters but refused to release copies of the letters to the committee.

“EcoHealth portrayed the risks of these experiments as if they were not of concern, and the NIH accepted EcoHealth’s assertions without a searching inquiry,” the Republican lawmakers told Collins. “However, the assessment of the risks by both EcoHealth and the NIH do not seem to square with the understanding of the research risks at that time.”

“Although the engineered viruses at the WIV were far from SARS CoV-2 on the coronavirus family tree, this research reflected a high tolerance for risk,” the lawmakers said, adding that there is no evidence that EcoHealth took action to notify the NIH that it created viruses that exhibited enhanced growth in humanized cells.

“If EcoHealth and NIH could not handle compliance and oversight of such a basic policy, it raises more concerns about the overall adequacy of the oversight of this research, which leaves the public vulnerable to a serious lab accident,” the lawmakers wrote.

The NIH did not immediately return the DCNF’s request for comment.