Some parents in suburban Houston told the Daily Caller that they are scared because the superintendent who implemented critical race theory-inspired lessons in Loudoun County Public Schools was hired by their district.

According to the email obtained by the Daily Caller, Williams admitted that some of the district’s plans “do align with the ideology of CRT.”

“While LCPS has not adopted CRT, some of the principles related to race as a social construct and the sharing of stories of racism, racialized oppression, etc. that we are encouraging through the action Plan to Combat Systemic Racism, in some of our professional learning modules, and our use of instructional resources on the Social Justice standards, do align with the ideology of CRT,” Williams said in an email dated Sept. 18, 2020. 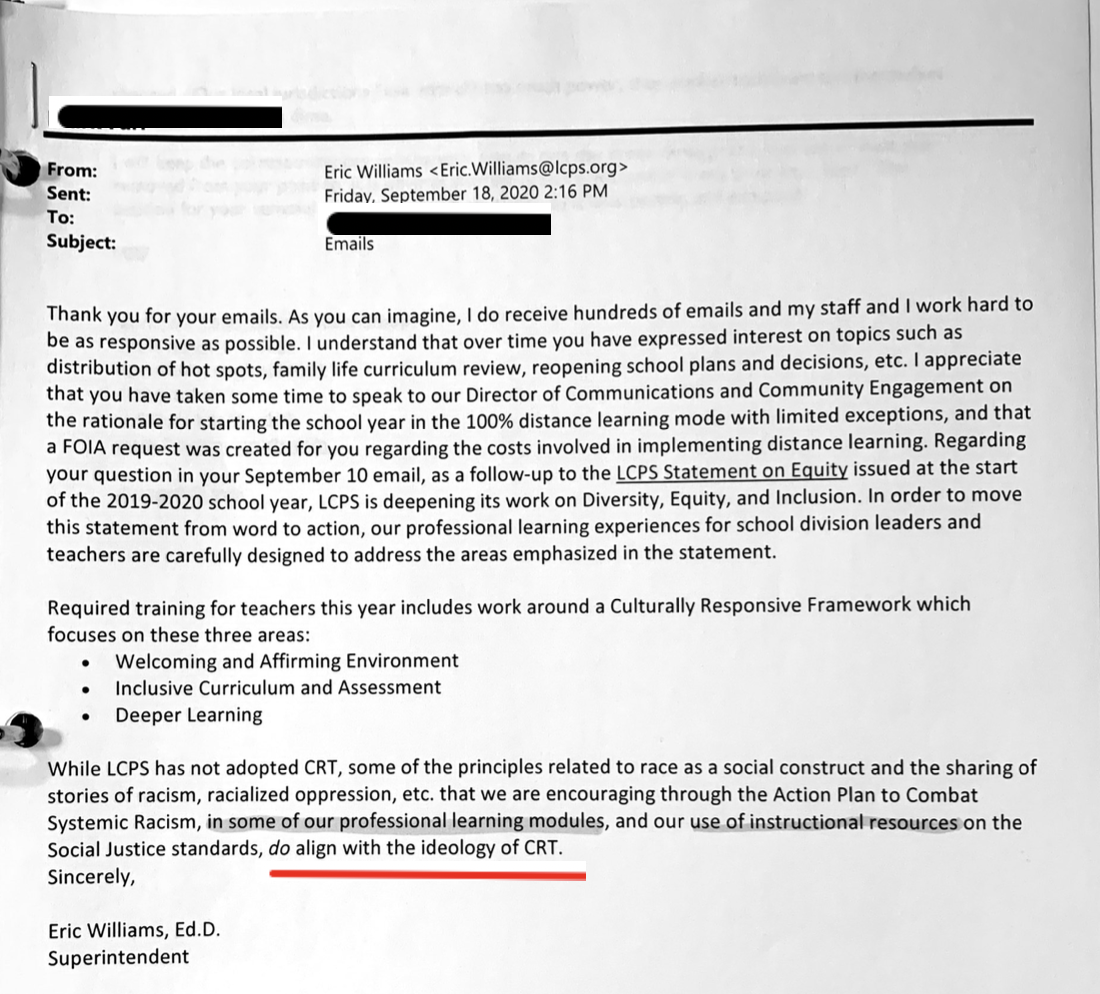 Under Williams’ supervision, LCPS spent $422,500 in taxpayer funds between 2018-2020 on diversity training inspired by critical race theory, according to the Washington Free Beacon. The district spent $314,000 in 2019 alone on coaching and training sessions hosted by The Equity Collaborative, a California-based racial equity consultancy group.

Following the uproar that followed the death of George Floyd at the hands of police, CCISD was undergoing a similar shift towards critical race theory-inspired principles. The district began implementing “social-emotional learning,” according to CCISD’s 2020-2025 Strategic Plan reviewed by the Daily Caller. “Social-emotional learning” is linked to the core tenets of critical race theory.

The Strategic Plan called for “trauma-sensitive professional learning for all employees to support the social and emotional needs of students and staff,” and for students, staff, parents and service learning opportunities to “support social and emotional learning.” The plan was created and approved in part by Board President Laura DuPont and former Superintendent Greg Smith.

Kari Larson, a mother with children enrolled in CCISD, told the Daily Caller that she believes Williams was selected as superintendent to help promote the district’s “social justice” agenda. Larson said that kids “need to know how to do math, not have ‘social-emotional learning.’”

Parents said they were frustrated with the school board’s decision to hire Williams and vocalized their fear that critical race theory would enter the district. The board updated its instructional resources to include language that would prohibit the explicit use of “critical race theory,” according to Community Impact Newspaper. Larson told the Daily Caller that “critical race theory” still exists at CCISD, it just goes by a different name.

Examples of programs that have been perpetuated under William’s supervision at CCISD include “Leader in Me” and “Character Strong.” According to some parents, the program lessons are about “character” and “less about reading, writing, math, etc,” which they feel is the true job of the public school system.

Scott Mineo, a parent activist in Loudoun County and founder of Parents Against Critical Theory (PACT), told the Daily Caller that his organization emailed “every CCISD school board member, the CCISD President, and the Houston Chronicle to warn them about their disastrous decision” to hire Williams. Mineo often dubs Williams as “Equity Man.”

Mineo said PACT teamed up with Houston parents, such as Larson, the organization feel it has “unfinished business” with the man who brought critical race theory to their district.

“We are working with the CCISD parents and will be providing them with our new service ‘Loudounize as a Service,’” Mineo said. “This will allow them to launch their own CCISD ‘Parent Warrior’ website with all the content, tactics, and information we’ve been gathering for over two years so that they can immediately begin their fight without starting from nothing.”

The Clear Creek Independent School District did not respond to the Daily Caller’s request for comment.