James Dowling is being targeted and threatened with expulsion at @SLU_Official for hanging up conservative posters OFF CAMPUS.

The student, James Dowling, was told in a Dec. 9 video conference with school administrators that he could face expulsion for his “inappropriate conduct” and “failure to comply,” according to YAF.

Dowling, a member of the SLU College Republicans group, was putting up flyers advertising Walsh’s off-campus event on Dec. 1 when nearby SLU administrators, uncomfortable with the presence of SLU’s name on the same flyer as the SLU College Republicans, told him to take them all down, according to YAF. Dowling reportedly offered to cross out the names on the flyers with a marker, but the administrators wouldn’t accept the compromise.

In a letter dated Dec. 9, the SLU Office of Student Responsibility and Community Standards sent Dowling a letter detailing his alleged breaches of SLU’s “Community Standards.” The letter also noted that Dowling would be required to attend a hearing for his “Suspendable Violations.” 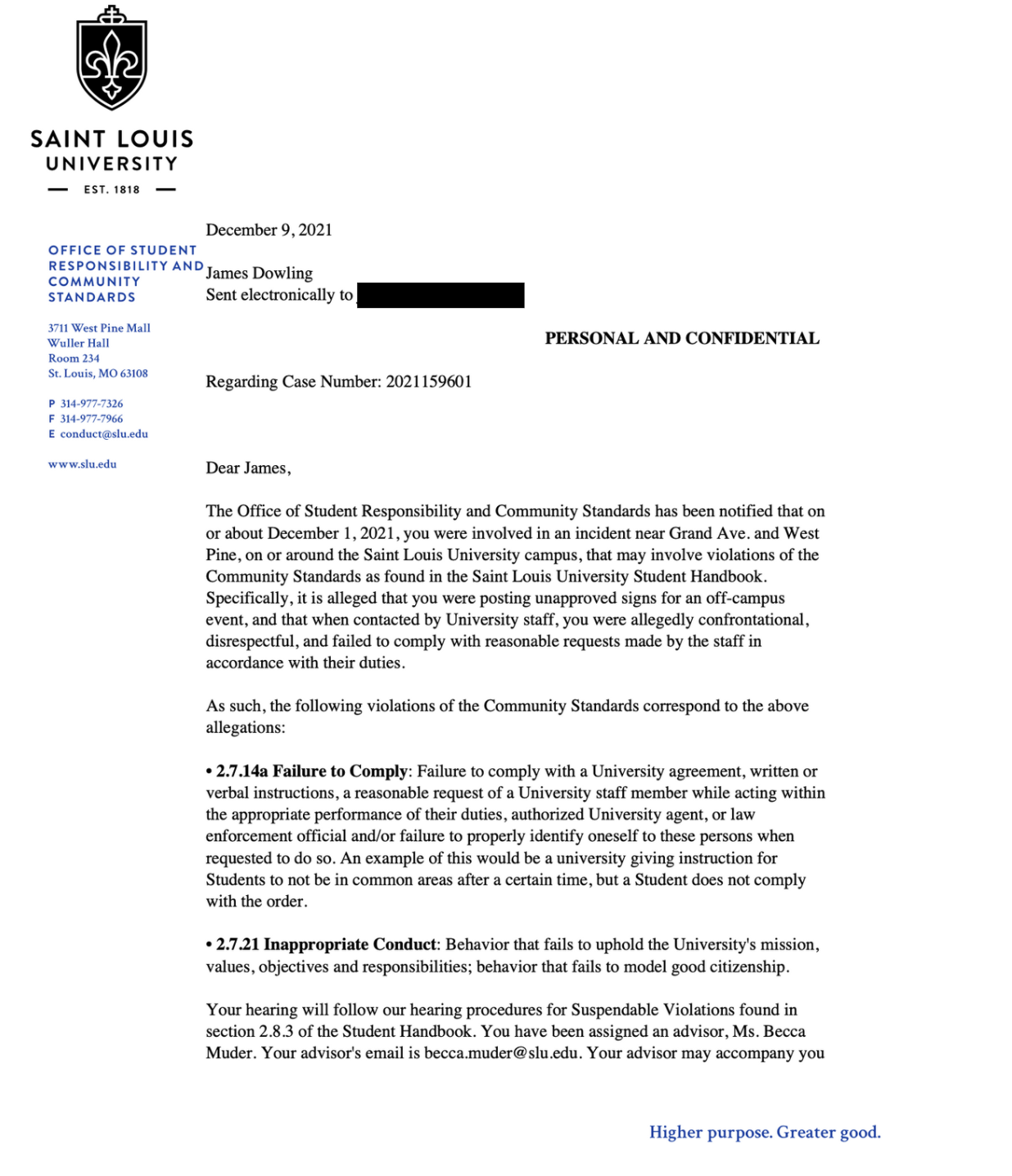 Courtesy of the Young America’s Foundation.

“This is yet another case of politically motivated prosecution by the Office of Student Responsibility and Community Standards,” SLU College Republicans President Nicholas Baker said in a statement shared with the Daily Caller News Foundation. “After dealing with them when they went after the club for asking another organization, the ‘SLU Sluts,’ to define the word ‘woman,’ and learning that the office’s director distributed copies of the ‘Genderbread Person’ to students a few years ago, I have no confidence in their ability to be fair and objective in their decisions.”

Walsh’s event, hosted by the SLU College Republicans and YAF at a Missouri hotel, focused on the Supreme Court case Dobbs v. Jackson Women’s Health Organization, the DCNF previously reported. Walsh confronted protestors outside the event to offer them an opportunity to answer his question, ‘what is a woman,’ but they declined, Walsh said on Twitter. (RELATED: Amazon Removes Matt Walsh’s Children’s Book ‘Johnny The Walrus’ From LGBT Book List)

Matt Walsh and the SLU Office of Student Responsibility and Community Standards did not immediately respond to the DCNF’s requests for comment.