The Biden administration is rewriting a key civil rights laws and using the power of federal bureaucracies to enforce its transgender agenda, legal experts told The Daily Caller News Foundation.

In June 2021, the Biden administration announced its intention to interpret Title IX of the Education Amendments of 1972, a landmark civil rights law barring sex-based discrimination in federally funded schools, to apply to gender identity in additon to sex. The administration also announced in May 2021 it would interpret Section 1557 of the Affordable Care Act (ACA) to expand its protections against discrimination to include gender identity.

“Because this Administration can’t push its LGBT agenda through elected representatives in Congress, it’s issuing lawless regulations that would require experimental transgender surgeries to be performed and paid for by insurance, including on minor children, in the name of non-discrimination,” Roger Severino, former director of the Health and Human Services (HHS) Department’s Office for Civil Rights, told TheDCNF. “President Biden is certainly paying back his radical base, but making a mockery of our civil rights laws and hurting our kids in the process.”

U.S. Secretary of the Department Of Health And Human Services (HHS) Xavier Becerra testifies before a Senate Appropriations Subcommittee, on Capitol Hill, May 04, 2022 in Washington, DC. (Photo by Kevin Dietsch/Getty Images)

By interpreting the prohibition on sex-based discrimination in Section 1557 of the ACA to include gender identity, the administration has made it so healthcare providers can’t treat patients who identify as transgender differently than other patients. The Equal Employment Opportunity Commission has used the policy to force employers to pay for sex changes against their religious beliefs and to force healthcare providers to perform those procedures.  (RELATED: POLL: Americans Overwhelmingly Reject Biden’s Stance On Sex Changes For Kids)

“The Biden administration has imposed an extreme rewriting of federal civil rights law to mandate bans on gender identity discrimination, and these bureaucratic requirements threaten the health and opportunities of women in areas as broad as sports, healthcare, housing and employment,” Matt Bowman, senior counsel for the Alliance Defending Freedom (ADF), told TheDCNF. “The Biden administration has repeatedly refused to protect religious liberty from these infringements.”

“HHS Guidance encourages a parent to file a complaint if a medical provider refuses to gender transition their child, of any age, including an infant,” he wrote. “The thought that a newborn child could be surgically altered to change gender is the result of the Biden HHS Notification and HHS Guidance that brands a medical professional’s refusal to do so as discrimination.” 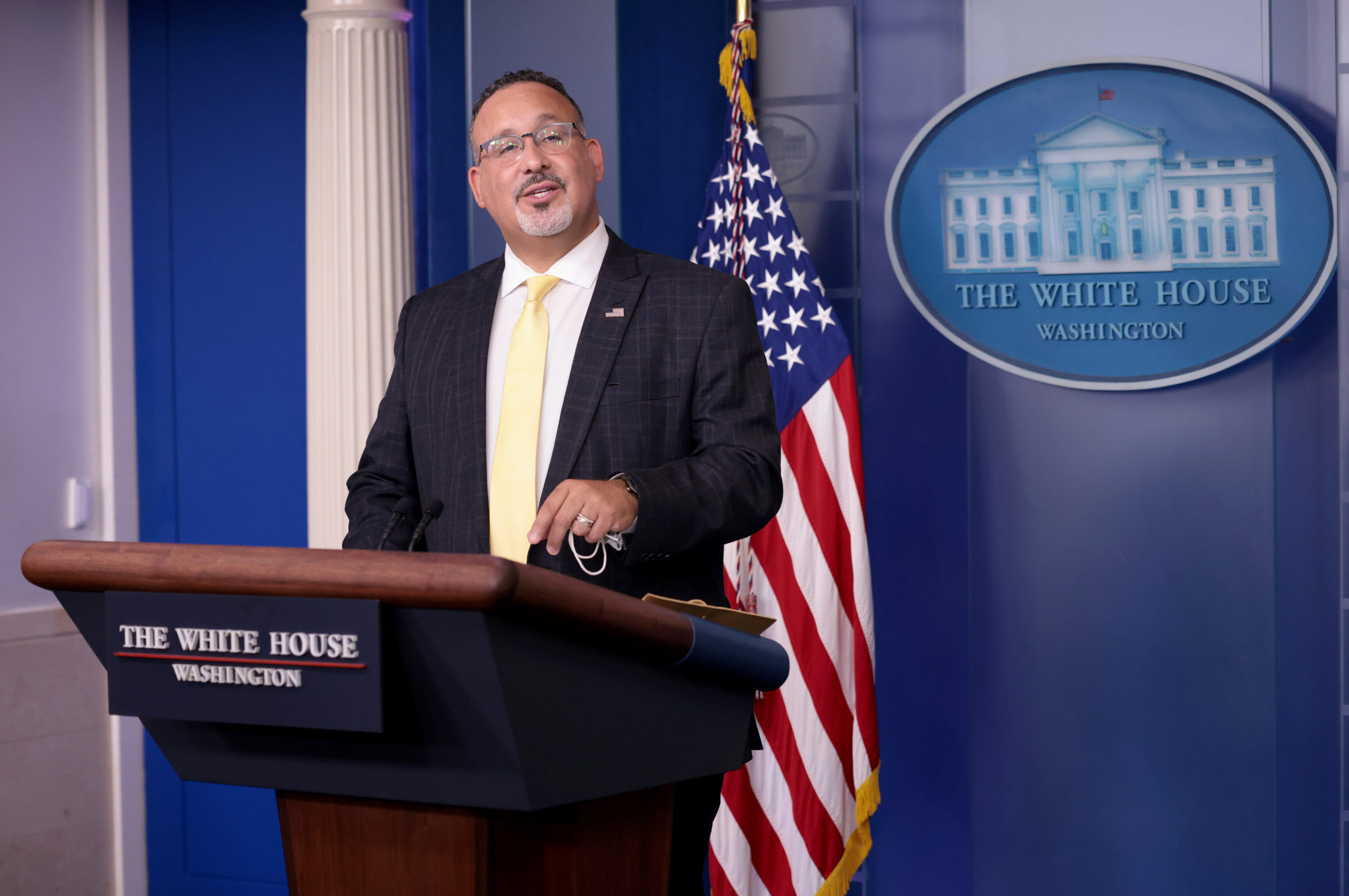 Secretary of Education Miguel Cardona answers questions during a briefing at the White House on Aug. 5. (Win McNamee/Getty Images)

Additionally, the Department of Education (DOE) under Biden is expected to officially expand the definition of sex to include “gender identity” under Title IX. This would require every sex-separated women’s space, including bathrooms and locker rooms, to accommodate males who identify as transgender women, according to Sarah Perry, a senior legal fellow for The Heritage Foundation.

The DOE also provided expert training on transgenderism to school staff and helped teach schools to strategize and take action to support transgender and nonbinary children, according to a March 31 White House announcement.

Biden has also pushed the transgender agenda through guidance to federal bureaucracies, who have begun disregarding sex in security screenings, making it easier to change one’s sex in official paperwork and allowing individuals to decline to state their gender on official forms.

Biden voiced unwavering support for “gender affirming care” for children, meaning social transitions and radical biomedical interventions rather than counseling to help children accept their bodies, in a March 31 statement.

To transgender Americans of all ages, I want you to know that you are so brave. You belong. I have your back. pic.twitter.com/mD4F0m3rU1

Federal agencies made it easier to change one’s gender identification and in some cases offered “X” gender options in official paperwork under Biden, according to the March 31 White House announcement. Such options were made available on social security paperwork, in federal financial aid for students and for White House visits and the White House proposed the 2023 budget include $10 million in funding to research how best to ask questions about gender identity and sexual orientation in the census.

The TSA and the Department of Homeland Security announced March 31 that they would stop considering gender in their security processes and update their advanced imaging technology (AIT) at airport checkpoints with the help of $18.6 million from Congress. The TSA said it would work with airline carriers to promote “X” and “U” (undisclosed) gender options in reservation systems.

The DOE, HHS and White House did not respond to TheDCNF’s requests for comment.