A candidate running for a U.S. House seat in Michigan has donated hundreds of dollars to groups that support reducing funding for the Grand Rapids Police Department (GRPD), according to records reviewed by the Daily Caller.

Hillary Scholten gave hundreds of dollars to the Progressive Women’s Alliance of West Michigan, which supports cutting the budget of the GRPD. Scholten has also made thirteen separate contributions to Equity PAC, which also supports defunding the department.

One day after a May protest in Grand Rapids turned into a riot, Equity PAC argued that the City of Grand Rapids should not implement a curfew and further implored the city to “expunge any records and waive all fines” for people who violate the curfew.

The following day, Scholten shared and praised a post that dismissed the damage caused by the protests, which were later reported to total approximately $448,000. 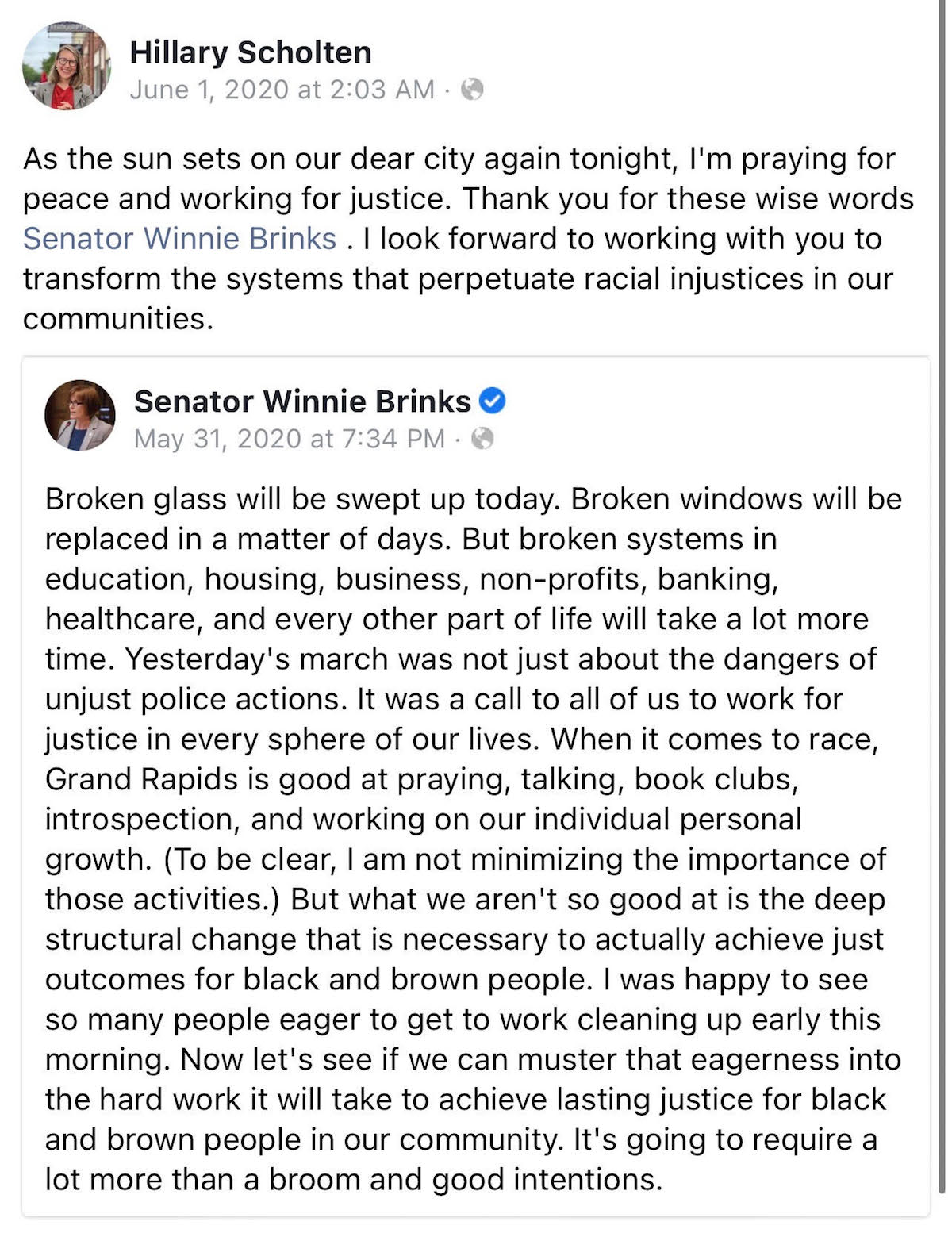 Scholten gave $300 to the Progressive Women’s Alliance of West Michigan, which supports reducing funding for the Grand Rapids Police Department, between 2019 and 2021.

In 2020, the Progressive Women’s Alliance of West Michigan issued a statement calling for the Grand Rapids Police Department’s budget to be reduced by approximately $9 million.

“The Grand Rapids City budget is a values statement. It can show how much we value (or do not value) true equity for traditionally ignored individuals. The Progressive Women’s Alliance stands with communities of color and others to ask that the Mayor and City Commissioners adopt a motion to reduce the Grand Rapids Police Department’s budget from 38% to 32% of the city budget. This will fund the GRPD at roughly the same level it was in 2015 and free up approximately $9 million for true equity work… If this additional $9 million was needed, we would have seen a line-item budget by now, yet we have not. If there was evidence that this additional $9 million truly stopped crime in process, we would have seen it by now.” 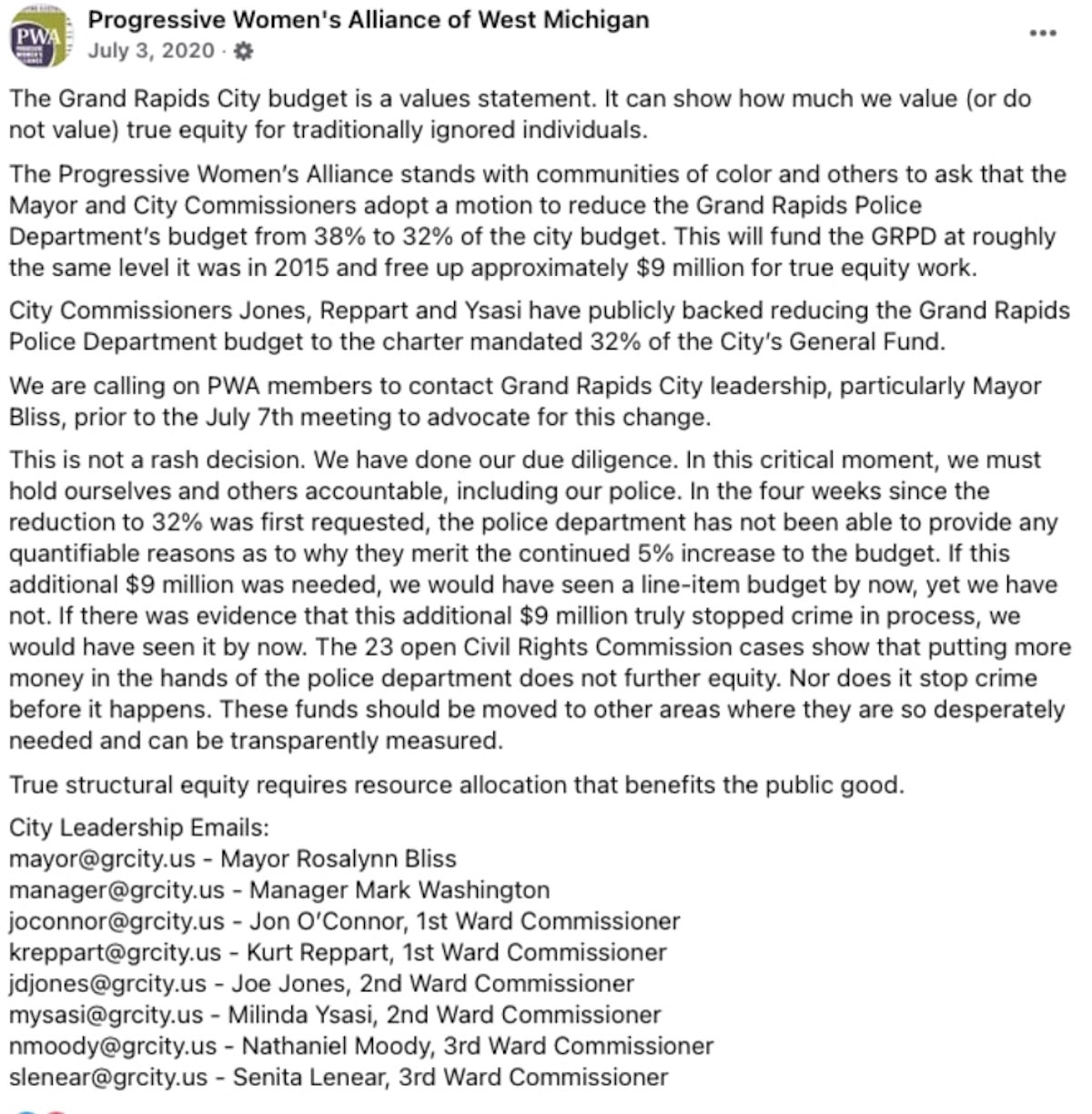 The Caller reported Thursday that Scholten, who supported bail reform during her 2020 campaign to represent Michigan’s Third Congressional District, had apparently removed the entire criminal justice reform section from her 2022 campaign website. Scholten kept most sections of her website the same from 2020 to 2022, including Healthcare, Jobs & the Economy, Education, Social Security & Medicare, Energy and the Environment and Roads & Infrastructure. (RELATED: EXCLUSIVE: Swing-District Democrat Hillary Scholten Scrubs ‘Bail Reform’ Section From Campaign Website)

The Michigan Democrat lost the 2020 election to Republican Peter Meijer, who voted to impeach former President Donald Trump over his role in the Jan. 6 Capitol riot. Meijer lost his Aug. 2 primary to Trump-endorsed challenger John Gibbs.

Scholten and her campaign did not respond to the Caller’s questions about the donations and whether she supports defunding the Grand Rapids Police Department.