The media has flown into a storm of outrage against a textbook in Texas for allegedly trying to whitewash the history of American slavery. But after a closer look, it appears the outrage is all over something perfectly innocuous.

The incident started from a Facebook post and viral video made by Roni Dean-Burren, whose son Coby is a ninth grader at a high school in Pearland, Texas. According to Dean-Burren, a textbook used by her son appears to whitewash slavery from America’s history.

The offending excerpt comes from a section in the company’s high school textbook World Geography on “patterns of immigration.” 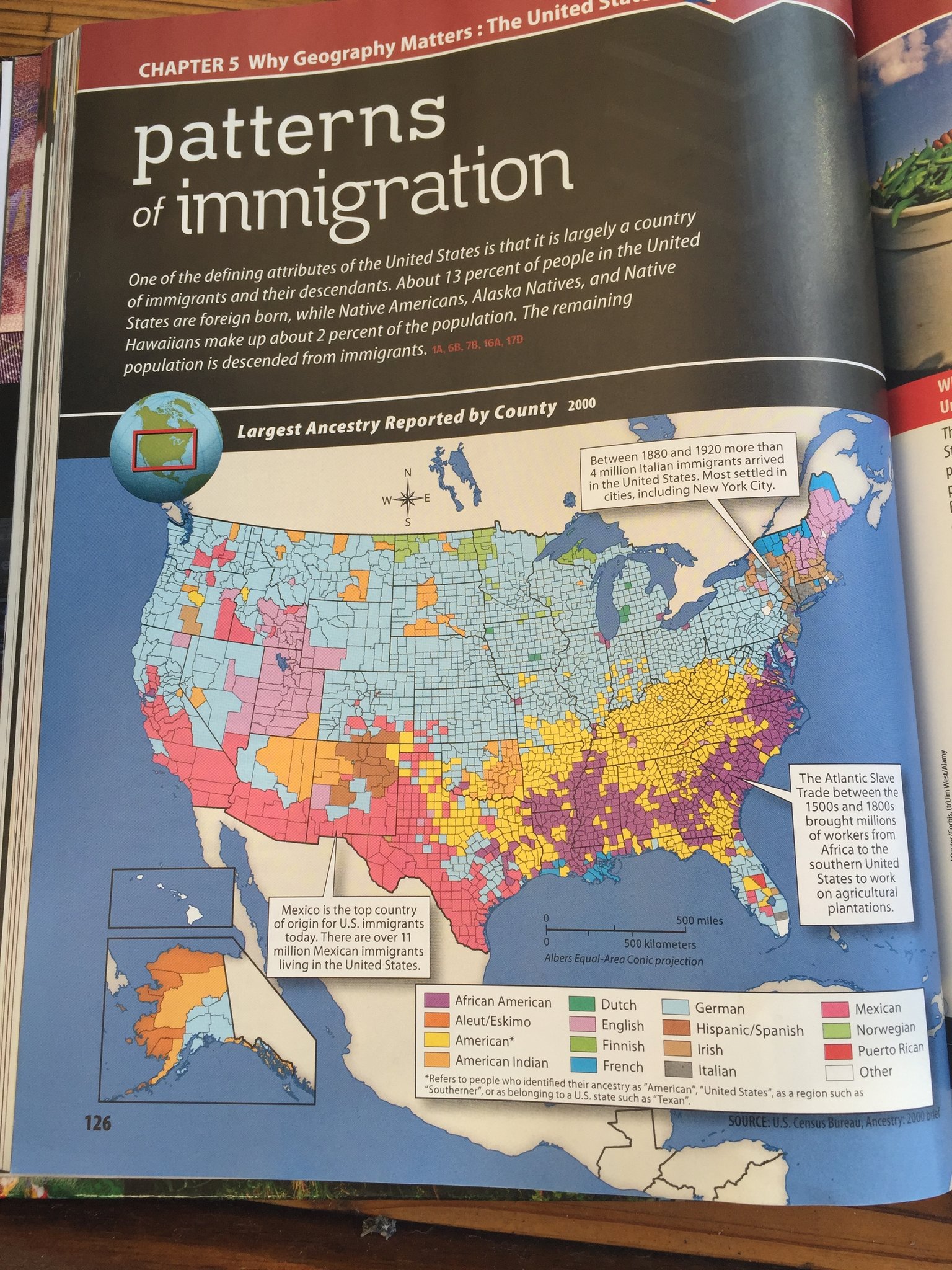 The Human Geography excerpt that has everybody up in arms against McGraw-Hill. (Coby Burren)

The image is a map of the U.S. which shows the largest ethnic group by county, and uses this to describe the U.S. as a nation of immigrants. To help further the description, several short facts are given to describe certain parts of the map. For instance, the domination of Mexicans in the American southwest comes with the note that “Mexico is the top country of origin for U.S. immigrants today. There are over 11 million Mexican immigrants living in the United States.”

What caused Dean-Burren’s outrage, though, was the fact given to explain the heavy presence of African-descended people in the South: “The Atlantic Slave Trade between the 1500s and 1800s brought millions of workers from Africa to the southern United States to work on agricultural plantations.”

“It [slavery] is now considered immigration,” Dean-Burren said in her video. She later notes that the textbook briefly mentions that some Europeans came to the U.S. as unpaid indentured servants, but that no further discussion is given to slavery. “It just says we were workers.” In her Facebook post, she elaborated that “workers implies wages…yes?”

The video has received over two million views and driven a storm of criticism against McGraw-Hill. The company, seeing the growing backlash, has raced to do damage control. On Monday, CEO David Levin released a letter calling the wording “a mistake.” At first, the company just said it would update the next edition of the textbook and change its online version, but that wasn’t enough for some activists, who demanded the company recall and replace every copy of the book. Now, Levin says the company is offering to replace the books for any district that wants them too, while also offering to supply stickers that could be pasted over the original offending text.

The New York Times has gushed about Dean-Burren’s action, crediting her with teaching McGraw-Hill a “lesson in accuracy.” Outlets like ThinkProgress have shifted blame onto the Texas State Board of Education, whose conservatism is blamed for pushing textbook publishers to suppress history.

But the entire meltdown appears to be built upon sand, for a host of reasons:

1. The textbook didn’t hide the fact that Africans were slaves.

The offending sentence in the textbook quite bluntly says that Africans were brought to America as part of the “Atlantic Slave Trade.” Unless critics are assuming that high schoolers are totally ignorant of what the term “slave trade” implies, it’s hard to argue that slavery has been whitewashed from the textbook when it’s directly named.

Immigration is a general phenomenon, and slaves actually can be immigrants. Merriam-Webster defines an immigrant as “a person who comes to a country to take up permanent residence,” and immigrate as “to come into a country of which one is not a native for permanent residence.” Neither definition requires that a person arrive in a country voluntarily. Merely arriving permanently is enough, regardless of the reason.

Webster’s full definition of worker defines it as “one that works especially at manual or industrial labor or with a particular material.” It’s a fully appropriate word to describe laborers on plantations, and is not limited to those who are paid. For example, the Understanding Slavery Initiative’s history of plantation slavery repeatedly describes plantation slaves as “workers,” without any indication they were paid.

4. The textbook wasn’t a history textbook, and had no obligation to talk at length about slavery.

Critics have complained that simply including the mention of slavery in a section about “patterns of immigration” served to whitewash slavery, but that’s an odd complaint, because if it wasn’t in that part of the book it would potentially just go unmentioned entirely.

While Dean-Burren at first incorrectly identifies her son’s book as a history textbook, it’s actually a geography textbook (as revealed by its title). The focus wasn’t on immigration as a phenomenon of American history; instead immigration was being discussed as a general geographic topic, and America’s demographic diversity was used as an illustrative example. Mentioning slavery in passing was an entirely voluntary decision by the book’s authors, and ironically, the entire controversy may have been avoided if they had actually whitewashed slavery out entirely, because critics would have found no side mention to complain about.

5. Texas standards don’t have anything to do with the wording.

Texas has detailed educational standards for a variety of subjects, and that includes world geography. The standards are also freely available online (they start on page 19 of the linked document). Reading them reveals that the standards are quite broad, and they simply don’t mention slavery, instead focusing on geographic concepts like climate, landmasses, patterns of human settlement, and more. The standards also require teaching about the U.S. being a nation of immigrants. Slavery is absent, but not due to whitewashing but instead because it’s not of critical importance to the subject.

Where slavery is highly relevant is history, and unsurprisingly, it is mentioned in Texas’ history standards, where it is mentioned seven different times for U.S. history and twice for world history.