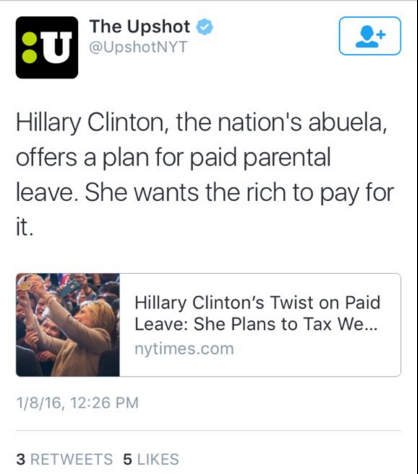 “Abuela,” of course, is simply the Spanish word for grandmother. The label appears to be inspired by a list Clinton’s campaign published before Christmas titled “7 things Hillary Clinton has in common with your abuela.” The list is an attempt to appeal to Hispanic voters, but was ridiculed by many Hispanics who dismissed it as “Hispandering.”

Other than using the term in its tweet, The Upshot makes no reference to the controversy. The actual — serious — article about Clinton’s parental leave proposal never uses it. Instead, the publication seems to be simply using “the nation’s abuela” as a neutral, unironic label for Clinton.

In fact, they go further than Clinton’s campaign did. The original list just compared Clinton to other people’s grandmothers, which is a far cry from declaring Clinton the grandmother to the entire nation, George Washington-style.

Hillary Clinton offers a plan for paid parental leave. She wants the rich to pay for it. https://t.co/wYe7YPM3AL